A better world for children

Nobel Laureate Kailash Satyarthi talks about his journey and his latest endeavour of setting up child-friendly villages. 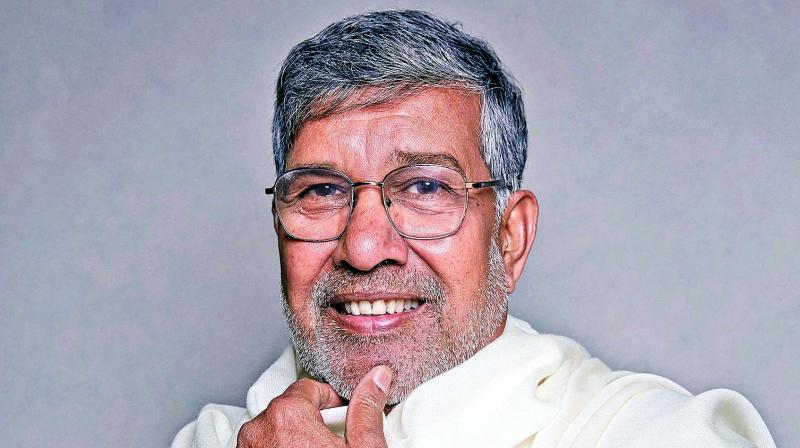 As a mere five-year-old, on seeing the discrimination and disparity between the shoeshine boy and himself, Nobel Laureate Kailash Satyarthi found himself in a discomfort and conflicted state. “It was such a shock to me that there were some people born to work at the cost of their education and freedom. Why are some children born to become slaves for others,” he asks. That ‘why’ became the first spark in his life and he started seeing the world with different eyes. “One thing I could feel, when God has given us birth as equal human beings, then why are some children born to work and while others can pursue their dreams. I refused to accept, and I still refuse to accept after five decades or so,” rouses Satyarthi. Speaking at the third Link Lecture, organised by the Link Intime India, the humanitarian not only reminisced his journey from being a curious five-year-old to the time he was awarded the Nobel Peace Prize in 2014, but also introduced his latest endeavour Bal Mitra Gram (Child-friendly villages).

Satyarthi went on to study electrical engineering and worked as a lecturer after that but was still haunted by that discomfort. Following this “crazy idea”, he quit his career and started a magazine Sangharsh Jaari Rahega (Struggle will go on) on the women and child rights. He says, “It was a time when the whole idea of child rights hadn’t been properly articulated in the world.  The UN Convention on the Rights of the Child was adopted by UN General Assembly only in 1989 and is in operation since 1990.  I am talking about the late 70s and early 80s. I was speaking the language the world was not speaking in those days.”

Although the turning point which solidified Satyarthi’s resolution was also his first case of forced bonded labour and child trafficking in Punjab which he came across through his magazine. The case was a rather difficult one as Satyarthi was physically attacked and also had to deal with the lack of proper awareness about such an issue. But, he was successful in liberating 36 children and even claims it to be the “the first documented incident in India and contemporary world of liberating children from slavery.” He goes to add that it was like getting a glimpse of god on the faces of children and their mothers, something that helped him never look back.

As he progressed further in the issues relating to children, he realised a pattern between child labour, poverty and illiteracy which he calls the Triangular Paradigm of Exploitation of Children and has been acknowledged by the UN agencies.  He questions that if 210 million adults are jobless, then why 152 million children are employed in the full-time jobs. “Every child is working at a cost of one adult job. Children are employed because they are the cheapest source of labour, cannot go to the court of law, and can be sexually abused,” he says.

The solution for this is in the third dimension of education. As child labour is the biggest impediment for illiteracy, he enlightens that it is just not a humanitarian issue, but an economic one. Enlightening with some chilling data, he says, “If we spend one dollar on the eradication of child labour in a country, according to the International Labour Organisation (ILO), UN and World Bank, the return would be seven dollars over the next 20 years. But, if one country spends one dollar in an education, the return would be fifteen times in next 20 years. The best investment is hence in the education in an economical background which will also help in the eradication of social evils like child marriages and so on.”

His latest project is Bal Mitra Gram (Child-friendly villages), which has been a way to counter and eradicate the child employment in the mica mining and factories in Jharkhand. He calls for a joint initiative between the corporate and organisations like his to ensure a child-labour free country. In a rather contentious statement, he says, “I don’t believe that corporations are a money-minting organisation, by combining passion and compassion with intelligence, they can also be the change-makers.” Rousing his audience with that, he urged them to contribute in whatever way possible.