Man of the mountains

Ridham Janve’s The Gold-Laden Sheep and the Sacred Mountain will be screened in the competition section at the upcoming Mumbai Film Festival. 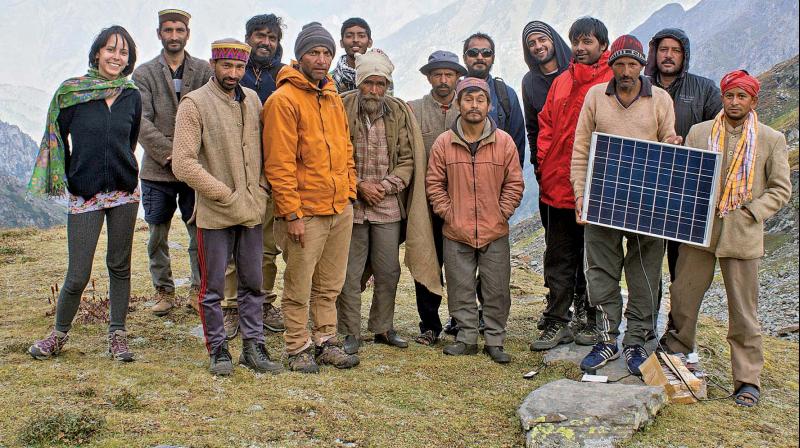 The cast and crew during the shoot of the film.

Debutant director Ridham Janve categorizes his film as an “ethnographic sci-fi” offering, finding it difficult to place it in any other genre. His 96-minute-feature is permeated with folklores from the pastoral Gaddi community in Himachal Pradesh that quite often steer into the metaphysical realm.

The film is ethnographic by all accounts, mainly because it’s shot entirely in the Gaddi dialect spoken by the shepherd community of Himachal Pradesh, but mostly because the locals make up for most of the cast and crew of this independent film. It makes its world premiere at the 20th Jio MAMI Mumbai Film Festival this week under the competitive India Gold category and will perhaps be the first time a Gaddi film has ever made it to the festival.

Set in the backdrop of the Kangra and Chamba districts, the story unfolds itself when an old Gaddi shepherd sets out to find a pilot who crashed near the mountain range and embarks on a life-changing journey. Ridham’s film captures the mysticism and magic of the mountains with the aid of the myths and beliefs of the Gaddi tribesmen, all from an insiders point of view, “It’s not a film about gaddis but with them and based on their customs and beliefs and their relationship with the mountains. Their life is all about the mountain and it revolves around it,” says the director who has spent months with the Gaddi tribe to understand their unique culture, even much before the film took shape.

The story came along, when Ridham and his writer friend Akshay Singh, were on one of their treks around those ranges. “We spent a lot of time with Gaddi people and were becoming familiar with their stories and that was when the idea took shape. They have a lot of stories of people going missing followed by something miraculous happening to them. They obviously associate them with the mountain, as if it's a live entity,” he narrates.

It was in some of those stories that Ridham found a lot of sci-fi tropes that drew his attention to them. “Those things really fascinated me as much as the mountain landscapes fascinated me,” he says. When this story eventually came along, it couldn’t be fit into a conventional mould. Not only were their resources hyper-local, the unforgiving conditions and tight production budget posed more challenges. “When we were camping up the mountain while shooting this film, the nearest village with electricity and basic supplies were a two-day walk away. It was tough but rewarding, just like the mountains, where one place will give you the pleasure of its landscape while another can be difficult and ruthless,” he says emphatically.

While the script took Ridham only a few days to write as, “it was more of a treatment note for himself”, finding the locations and his protagonist took more time. “Sometimes we would just walk around in the mountains for days and days with nothing in hand and sometimes, we would question ourselves. But we knew it was under control after meeting the shephard  (Bhedpal Arjun Pant), the protagonist in the film.”

Arjun’s meeting with the filmmaker was miraculous, as if the mountains conspired to make the two meet. “When we were looking for shepherds we had to go really high up into these pastures. One pasture is a day’s trek away from the other. My protagonist was staying two mountains away from where we were based. So my Gaddi friends tried to convince me to just skip meeting him and go back and think of something else.”

But intuition played its part and Ridham was unwilling to relent. In fact, his meeting with the shepherd was almost prophetic, “So I finally met him at a completely unexpected place in the mountains. It was just the three of us and we hadn’t seen any civilization for days. Suddenly we spotted a small dog and realized there would be someone there. It took a long time for Arjun to reach us too. And once he was there, we knew he was our guy. Before I told him about the film and our plans he asked me – what are you here for? I have been waiting for you, we have to do this!” he exclaims.

The protagonist met the filmmakers in July or August of 2015, “In March of the same year, 51 of his sheep died in a lightning strike and the rock which he was lying on split into two halves, but he was left without a scratch,” explains Ridham adding, “There was no way he could survive that kind of lighting but he always wondered why he is still around. When I told him the story, he said – this is why I was left alive.”

The film is far from being an idyllic postcard of Himachal Pradesh and it was a conscious effort to keep it that way, “We were basically trying to recreate that experience of someone who can feel the beauty as well as the ruthlessness of the mountains. We would consciously not shoot for mere beauty because that's not what the mountains are for me,” explains Ridham. This is precisely also why the film is slow-paced, like the movement of an amorphous cloud over a mountain. “The pace of the film is actually slow, but slow is really fast sometimes,” concludes Ridham.