Images by Alessio Mamo show series of poor people standing in front of table with food on it, with their hands covering their faces. 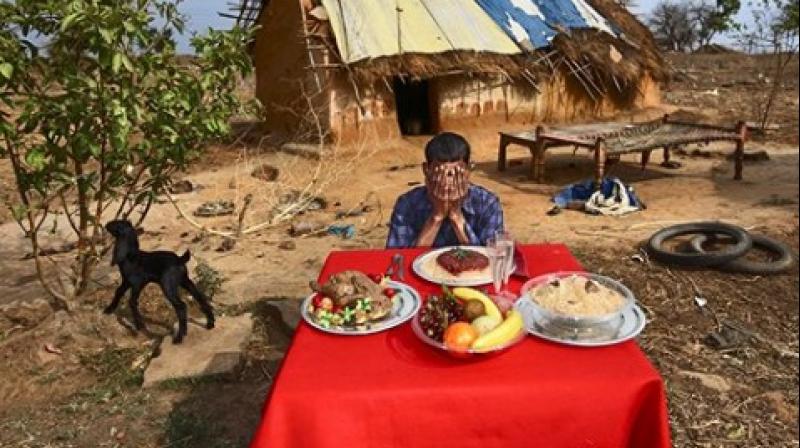 The photos, taken in villages of Uttar Pradesh and Madhya Pradesh, has a caption that reads, brought...a table and some fake food, and...told people to dream about some food that they would like to find on their table.” (Instagram Screengrab/ Worldpressphoto)

A photo series highlighting hunger in India that was shared on World Press Photo’s Instagram handle has been facing flak for its depiction of poverty.

The images, clicked by Italian photographer Alessio Mamo, show a series of undernourished, poor people standing in front of a table with food on it, with their hands covering their faces.

The photos, taken in villages of Uttar Pradesh and Madhya Pradesh, has a caption that reads, brought...a table and some fake food, and...told people to dream about some food that they would like to find on their table.”

These photographs are from Uttar Pradesh and Madhya Pradesh two of the poorest states of India. From the series "Dreaming Food", a conceptual project about hunger issue in India. ⠀⠀⠀⠀⠀⠀⠀⠀⠀ [This project has been the subject of much online debate. Please read Alessio Mamo’s statement, released on 24 July 2018, giving more details and apologising for any offence: https://medium.com/@alessio.mamo/my-statement-on-dreaming-food-7169257d2c5c] ⠀⠀⠀⠀⠀⠀⠀⠀⠀ My name is Alessio Mamo (@alessio_mamo) an Italian freelance photographer based in Catania, Sicily. In 2008 I began my career in photojournalism focusing on contemporary social, political and economic issues. I extensively cover issues related to refugee displacement and migration starting in Sicily, and extending most recently to the Middle East. I was awarded 2nd prize in the People Singles category of #WPPh2018 and this week I’m taking over World Press Photo's Instagram account. ⠀⠀⠀⠀⠀⠀⠀⠀⠀ Despite economic growth, a majority of the Indian population still lives in extreme poverty and disease. Behind India’s new-found economic strength are 300 million poor people who live on less than $1 per day. Government figures may indicate a reduction in poverty. But the truth is, with increasing global food prices, poverty is spreading everywhere like a swarm of locusts. These pictures are taken in rural areas where conditions are worse than in the cities and where close to 70% of India’s population reside today. Statistics show that 2.1 million children under 5 years old die of malnutrition annually. The idea of this project was born after reading the statistics of how much food is thrown away in the West, especially during Christmas time. I brought with me a table and some fake food, and I told people to dream about some food that they would like to find on their table. ⠀⠀⠀⠀⠀⠀⠀⠀⠀ #WPPh2018#asia #dreamingfood #india

Mamo, a well known photographer, had won the second prize in the People category of the World Press Photo of the Year Awards 2018, for his photograph of an 11-year-old victim of a missile explosion in Kirkuk, Iraq.

However, Mamo’s India photographs, from his series “Dreaming Food” – a “conceptual project about hunger issue in India” seems to have hit a raw nerve.

According to the photographer, the shots are from two of the poorest states in India. However, it remains unclear as to what metric he used to come to the conclusion.

Taking to Facebook, one user opined that he could not think of a better example of someone casting ethics aside and pursuing their own selfish and distorted ideas by using people to gain recognition and awards.

Mamo’s post on Instagram too received many critical comments, with users calling it “ethically deplorable” and cruel.

Wow, this is tasteless and crass. From photographer @alessiomamo: "I brought with me a table and some fake food, and I told people to dream about some food that they would like to find on their table.” https://t.co/kXHa5Tv9rv pic.twitter.com/eeZXUlNMak

It's called editorial discretion. When experienced photo editors/editor who knows about content is important. It shows weakness of World Press Photo leadership with no background in Photojournalism, also blurred lines to art, has become "influencer" really. https://t.co/0lg8PAE7xw

'I bought with me a table and some fake food and I told people to dream about what food they would like to find on the table.'

Even by @WorldPressPhoto exploitative standards. Even with their lack of editorial integrity this is really something else.https://t.co/Z47d40VNGD pic.twitter.com/ZghhM8UTbo

Dear God.. this is beyond horrible and unethical at so many levels. Call it whatever the hell you like Mr. @AlessioMamo but don't insult other photojournalists by defending your disgusting work as photojournalism.https://t.co/RPkold8P1H

Mamo, on his part, responded to the criticisms, clarifying that the photos were not shot with the involvement of World Press Photo but with a local humanitarian organisation.

He also wrote, “My intention was exactly to represent in a stereotyped way these Indian landscape in order to reinforce the concept. This was the idea behind, maybe I did it wrong, or maybe just you don’t like or you think it’s unethical, but the concept was to problematize food waste in front of the hunger in this area of the world.”

In a statement released on Monday evening, World Press Photo pointed to its guidelines and said that these are kept “under constant review to learn from the debates about pictures and projects the photographers share”.

“Photo contest winners and digital storytelling contest winners are given the opportunity to takeover the World Press Photo Instagram account for a week to share work of their choosing...Alessio Mamo’s takeover started on 16 July and ended on 22 July. Other than his portrait of Manal, none of the photographs Alessio has shared were awarded prizes in the photo contest...”