A walk conducted on the ‘dirtiest beach’ in the city reveals some stunning marine life post the cleanup. 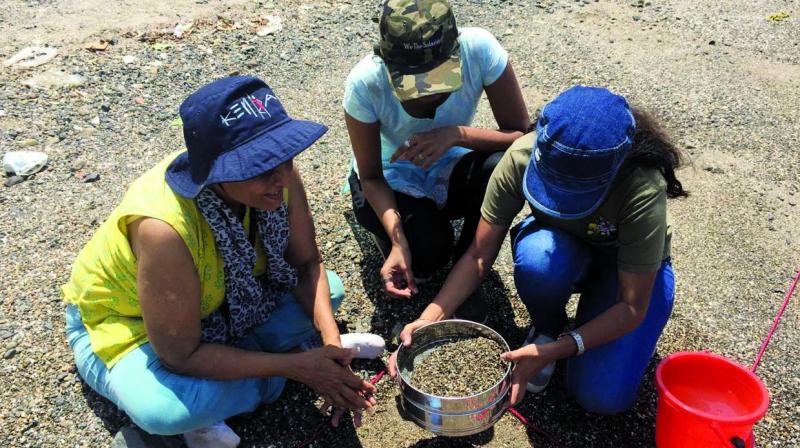 Claimed to be one of the dirtiest beaches in the city, Chimbai beach is not a common name among Mumbaikars. Located along the coastline of Bandra, just north of Bandstand, this beach has become a dumping ground for plastic and other city waste.

Claimed to be one of the dirtiest beaches in the city, Chimbai beach is not a common name among Mumbaikars. Located along the coastline of Bandra, just north of Bandstand, this beach has become a dumping ground for plastic and other city waste. In efforts to change the face of the beach, United Way has joined hands with Ladybird Environmental Consulting to not only clean the beach, but also to make it fit for the marine life.

One of the main reasons that Chimbai beach is the dirtiest in Mumbai is because of its geographical structure. “It is an inward bay so it curves inside. So a lot of water that comes inside gets collected and a lot of waste that the water currents carry is trapped on the beach and in the rock pools. So when there is low tide, the water recedes but the plastic and the pollutants remain. So that way with every low tide and high tide, it keeps on accumulating,” explains Isaac Kehimkar, the chairman and director of the iNaturewatch Foundation, who  hosted a walk along the beach on Sunday for people to see the reality of plastic pollution.

Plastic being one of the main threats to marine life, and to the environment in general, was banned in Maharashtra around this time last year. However, that hasn’t had any effect on this particular beach. “Plastics are not completely out of the system of Mumbai. They are being disposed of and it lands up in the sea,” says Isaac but also adds that the water along the city’s coastline could bring in plastics from other places. “The water is not just from Mumbai, the currents come from Gujarat, Goa and lots of other places. So the plastics could come from somewhere else.”

The marine walk is an effort to make people aware of the situation and how it can be improved. In fact, it will introduce you to the interesting marine life that has already started showing up. “The beach is mostly rocky, there are patches of sandy shore and small patches of mangrove as well, so it provides a space for rich biodiversity. Now we have different kinds of crabs, sea anemone in rock pools, different kinds of worms and colourful sponges below the rock. People have been watching the kind of diversity there is in Great Barrier Reef, but Mumbai also has that kind of marine life, though it is not in good shape,” informs Issac.

One of the best ways to judge a beach’s health is to examine the crab population and that’s what participants did during the walk. “Crabs are the indicator species which tell you the health of the habitat. Crabs can survive in difficult places, but sometimes it’s so bad, even they can’t survive. Apart from crabs, there are tiny selfish, their presence and absence tell you about the quality of the habitat,” he adds. At the walk conducted yesterday, the participants got a chance to assess the crab population on the beach by counting the crab holes. They also got to perform an experiment to determine the amount of micro plastic in the sand.

Speaking about the microplastic, which can go undetected and subsequently end up on your dinner table, Isaac explains: “The plastic bags which are floating around the sea break down the tiny particles which are not visible to naked eye. And that is now getting into the food web. Tomorrow if you eating any fish or crab, the animal that you are eating has possibly ingested that microplastic.”

Although cleaning the beach of microplastic is next to impossible, Dr. V. Shubhalaxmi, founder and director Ladybird Environmental Consulting, and her team are constantly monitoring the levels. She had even planned a small experiment that participants took part in during the walk. “The microplastic particles are usually present in the sand so the procedure is to collect sand samples. They are then washed and cleaned and kept overnight to see whether any plastic particles are floating.”

According to Subhalaxmi, they are already collecting data of microplastic particles and the crab population twice a month, and the analysis after two years will help them understand the difference that the clean up actually made.