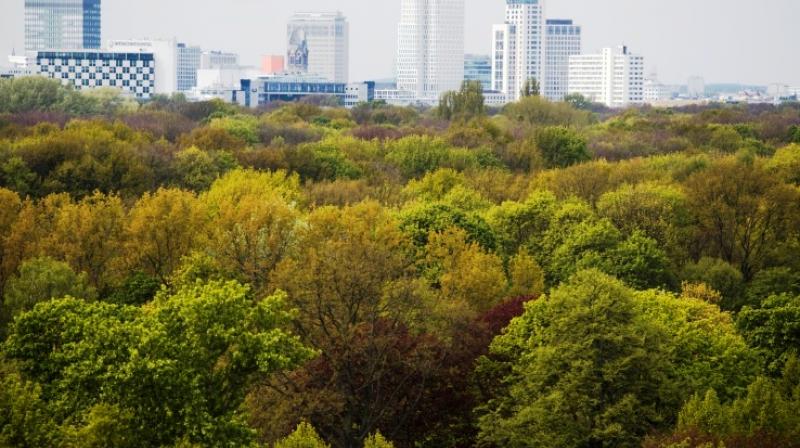 If you clear your gardens and have nothing but grass and the occasional tree, then there's nowhere for a nightingale to breed. (Photo: AFP)

Berlin: Sarah Darwin, the great-great-granddaughter of British biologist Charles Darwin, was sleepless in Berlin when, to her "enormous surprise", she heard a nightingale warbling merrily outside her window.

"It's very, very rare in the UK, so to be living in the middle of a capital city in Europe and hearing a nightingale singing outside your bedroom window is quite an extraordinary experience," the Berlin-based British botanist told AFP.

The trills got Darwin thinking and led to the launch of a citizens' project examining why the non-descript-looking brown bird, with its distinctive song, has been flocking to the German capital. The project by Berlin's Natural History Museum, where Darwin works, asks city dwellers to go out and record nightingales' song with their Smartphone and upload it onto an app.

Through the sound clips collected, scientists are also seeking to map out whether the birds take on "different dialects" in different parts of Berlin. "What's really exciting in Berlin is that, unlike for instance in England, where the population of nightingales has plunged by 90 per cent in the last 60 years, in Berlin there's in fact a positive trend," said Silke Voigt-Heucke, who is coordinating the project.

Scientists estimate that the population has grown by six per cent annually over the past 15 years in Berlin. There are believed to be between 1,200 and 1,700 nightingale pairs in the capital now. While urbanisation has forced wildlife out of most European city and town centres, in sprawling Berlin large areas of often prime land are still green.

But more attractive for the nightingale may be the German capital's general scruffiness. "We keep our parks and gardens in Berlin slightly more untidily, and the nightingales need this," said Darwin. "They nest on the ground; they need thick vegetation to protect them from foxes, cats, birds, dogs.

"If you clear your gardens and have nothing but grass and the occasional tree, then there's nowhere for a nightingale to breed. “So Berlin is very special in that way, a little bit unkempt and we have to keep that. We have to learn to see the beauty in this kind of wildness."

Take the 210-hectare (520-acre) Tiergarten park right in the centre: just steps away from the German parliament, the extensive park is home to between seven and 10 nightingale nests. One recent spring morning, a fox slunk past as Voigt-Heucke took a group to check if the Tiergarten nightingale inhabitants had returned from their winter hideout in Ghana.

Standing before an untidy patch of a thicket, she sounded a single-tone long whistle four times, and immediately received an agitated reply -- composed of a variety of trills, whistles and what sounded like throbbing beats.

"In the daytime, the message is aimed at potential competitors, telling them to 'get lost'," said the scientist of the loud riposte from the nightingale inhabitant. At night, the nightingales' song is aimed at attracting females to nest with them, with some birds known to sing for hours.

One of the research's early findings is that the bird's repertoire may be far broader than initially thought. Voigt-Heucke said the catalogue consisted of 2,300 different so-called stanzas submitted as recordings by the public and confirmed by scientists but "the potential is that it could end up containing 8,000 stanzas".

Scientists are now hoping to determine whether the birds adopt regional dialects. "What we can already show is that some of these stanza types are more frequent in Berlin and Brandenburg," the state that surrounds the city, said Voigt-Heucke.

"We hope that we can show that other stanza types are seen in Bavaria or in the Ruhr region." While the citizen's project is running into its second and final year, Darwin said that she was already hatching related plans.

For the scientist, the project has served a key purpose of "engaging people with nature". Over 18 months, "we've collected this extraordinary community of people who are celebrating the arrival of the nightingale and we are literally changing people's lives," said Darwin.

One man said to me: 'When I used to walk to work, I'd put my headphones on and listen to my music. Now I take them off and I listen to the birds'. "This is the sort of a big life-changing thing that people are doing."