The writer would have no idea about whiskeys but would call the whiskey fantastic to please the distiller. 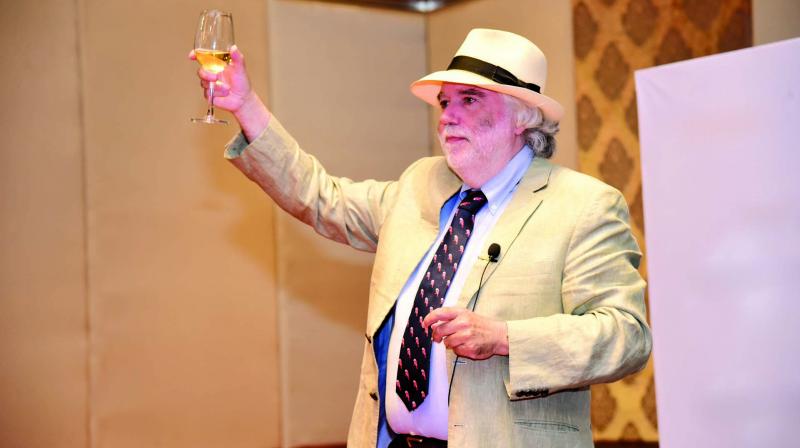 While many of us might think that tasting whiskeys for a living is probably the best job in the world, celebrated whiskey critic and writer, Jim Murray, who was in the city to conduct a whiskey-tasting event, tells us exactly what this entails. “I spend about four to five months researching and writing, with 14-hour long days. I consume really bland food during this interval and refrain from doing anything that could make me sick, even kissing. It’s stupidity!” declares Jim, who when not writing, travels the world conducting tasting workshops, training blenders or working as a consultant blender. Jim puts himself through the five-month ordeal in order to present, Jim Murray’s Whiskey Bible – his annual, faithful and flawless whiskey guide— with clockwork precision. “If I get a sore throat, it will take 17 days before I can trust my palate again. Do you know what a 17-day delay can do to people awaiting your book in 40 to 50 countries?” asks Jim.

And the latter statistic isn’t an exaggeration, for Jim Murray’s Whiskey Bible is widely considered to be one of the most comprehensive whiskey guides in the world. Every edition contains detailed tasting notes on over 4000 whiskeys, including a list of 1000 newly released or obscure whiskeys as well as a ‘Whiskey of the Year’ list for different countries. “Every time that book’s finished, a little bit of me has died. I’m a little bit like a pot still (a distillation apparatus) because it gives itself to the whiskey. I feel a little bit of me has dissolved into each book. When I’m finished with the book, I can’t describe how exhausted I feel, because it’s the mental concentration of tasting thousands of whiskeys, and it doesn’t matter if it’s a three-year-old blend or a 50-year-old whiskey, I give them as much effort. I try to treat them with as much respect. I only lose my respect if they’re no good.” says Jim.

Though the 2019 edition of the guide marks 15 years of the book, and 25 years of Jim working as a full-time whiskey writer, the critic, who gave up journalism to pursue whiskey writing terms his career move risky, because ‘whiskey writing’ didn’t even exist as a profession, let alone be a viable one. “No one had ever done it before. The only time whiskey was ever written about in newspapers or magazines was by wine writers, who’d get invitations by distillers because they didn’t know who else to ask. The writer would have no idea about whiskeys but would call the whiskey fantastic to please the distiller. I was just sick to death about the absolute garbage people were reading about whiskey. And I thought, ‘I’ve got to change this. I’ve got to give people something to read’,” he says. Jim, who had been visiting distilleries since 1975, and would make copious tasting notes, was encouraged by a friend and celebrated distiller to publish his tasting notes. This seal of approval from a veteran industry insider motivated him to take up whiskey writing part-time at first, and eventually, full time.

But there were pitfalls to making the switch, the most obvious one being a drastic change in income. “I went from earning really good money, to making almost nothing. I had to create a market for newspapers and magazines, not just in Britain, but also around the world. It took hard work, sweat and looking for some change to pay for my kids’ meals because for the first couple of years, there was no money coming in. But I always believed that I did the right thing,” he avers.

Given that Jim’s word is law for many in the whiskey world, and that his knowledge about whiskeys is unparalleled, we ask him what he thinks about Indian whiskeys, as India is often described as being the largest producer and consumer of whiskey in the world. While Jim vouches for the Amrut (whiskeys from the distiller have featured in his 2019 and 2010 editions) and Paul John brand of whiskeys, and reminds us that he was the first whiskey writer to dedicate a chapter to Indian whiskey in his 1997 book, Jim Murray’s Complete Book of Whiskey, the writer does feel that more can be done to bring Indian whiskeys on par with global quality standards. “What you call whiskey, is actually rum, because it’s distilled from sugarcane, and occasionally, molasses. So by name, you sell a lot of whiskeys, but in reality, not as much as you claim,” explains the critic, pointing out how many Indian “whiskeys” do not match international regulations, which require whiskeys to be distilled from malted cereals and be matured for a specific number of years. He also expresses what could bring about a change; “I would like to see an organisation of Indian distillers, so that things like calling Indian whiskey, “whiskey”, when it isn’t whiskey, is outlawed. The organisation should work closely with the Federal Government in determining what whiskey is, making it easier for the consumers to buy the proper product,” he says.

But what can be done by consumers to become more discerning about the whiskeys they’re drinking, we ask; do we flock to tasting workshops, or take refuge in fat guides? To this, the critic simply says, “Follow ‘The Murray Method’ of tasting, you’ll find it in my book.”