Brands aren’t strangers to social media outrage and recently, Vistara airlines found itself in the eye of a storm for posting a controversial tweet. 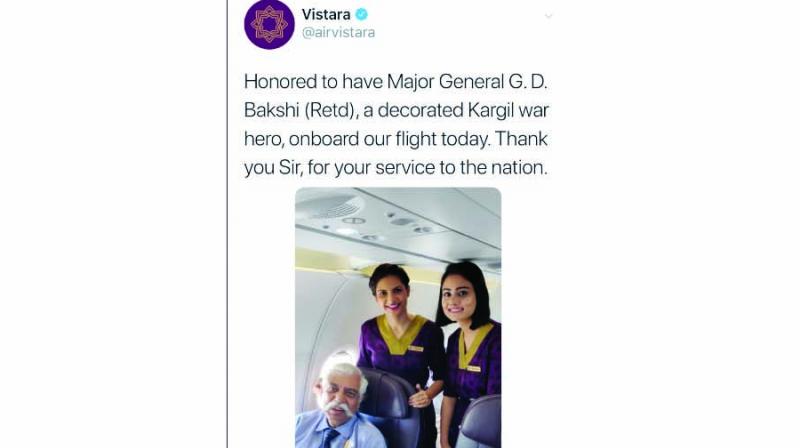 The Tweet that started it all and was later deleted.

Nothing can make a brand trend like a good social media controversy. Recently, Vistara airlines found itself in the eye of a storm after the airline’s official Twitter handle, @airvistara posted a photograph that depicted two Vistara flight attendants posing with Major General (retired) G.D. Bakshi. The Tweet said, “Honoured to have Major General G.D. Bakshi (Retd), a decorated Kargil war hero, on board our flight today. Thank you sir, for your service to the nation.” While many would have thought that the Tweet was innocuous, and was just another example of a brand marking the presence of a celebrity customer, there were Twitterati who felt otherwise, and quite strongly; the bone of contention being– Bakshi’s past speeches that have been labelled controversial. A slew of Tweets criticised the airlines for revering Bakshi, with some users even sharing video clips of said speeches.

The backlash prompted the airlines to delete the Tweet and issue a statement that said that Vistara routinely posted photographs of customers along with the crew and that the airline had decided to take down the Tweet because, “We do not want our platform to be disrespectful or hurtful to anyone. Our decision to remove the post was driven by the objective of deleting such comments.” However, instead of putting an end to the angry responses, the act of deleting the Tweet fuelled an even bigger controversy as those who saw Bakshi as being a war veteran felt that the move was disrespectful to him and military personnel in general. Users threatened to #BoycottVistara untill the picture was re-posted.

While the most recent update by the airline, which shows Vistara officials meeting with Bakshi at his home, suggests that all is now well between the customer and the airline, one can’t help but notice how routine it is for brands to get swept into controversies on social media. The democratic nature of social media platforms, coupled with the anonymity they provide, make them the perfect place for people to give vent to their opinions without mincing words. This outpouring can sometimes affect a positive change, while at other times, create a sticky situation for brands, especially if they have a huge number of followers. This is why, Digital Marketing and Social Media strategist, Anoop Mishra, feels that brands should be extra cautious while posting online.

“Brands do not enjoy the same liberties individuals do; they have to be cautious when posting online because people feel emotionally connected to the brands their fond of, so you risk affecting sentiments. Brands should stick to posts that focus on their message, products and services rather than resorting to impulsive updates. Follow ethically-sound guidelines that work in the favour of your brand,” he suggests. He also points out how brands should think about topical events unfolding, as they could impact the way a post is received. “You have to think about the political and social climate before posting. For example, if it’s election season, there will be trolls waiting for one to make the slightest slip. So you have to think before you post,” he adds. 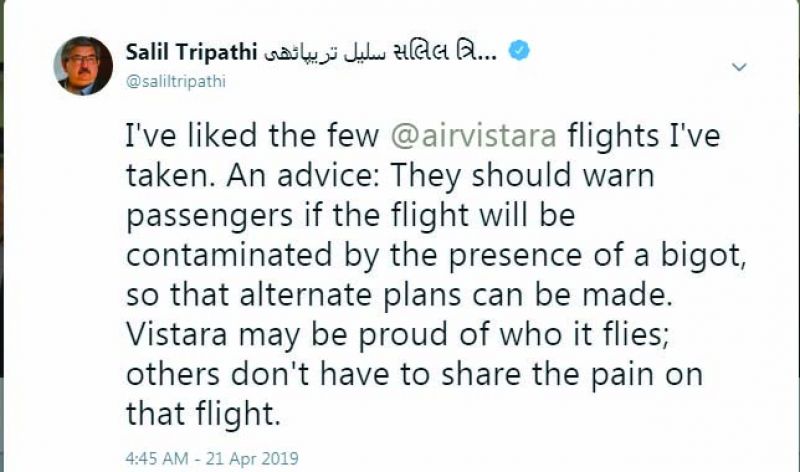 Hitesh Rajwani, CEO of Social Samosa, however feels that brands should think like individuals, and he has good reason for saying so. “If we have to converse in public, we also look at the environment we’re speaking in. Similarly, brands also need to have guidelines in place. But it also depends on the brands personality. If the brand is very open about such conversations, then there is no harm. But if the brand itself comes across as conservative, then they could keep a framework in place,” he says.

But what does a brand do if it finds itself mired in a controversy? Is apologising the only path to redemption? Hitesh believes that while it is important to act fast, one need not jump the gun and issue an apology. “Whenever crises hits your brand, the first thing you do is look at what percentage of your stakeholders are involved in that outrage. Are they relevant to your brand or not. There will always be ‘Twitter hit men’ who attack one brand today, and another one tomorrow. If it’s hate fuelled by mob mentality, stick to your guns and analyse if you should apologise or not. However, if your actual customers are complaining, then you could change your stance and look at apologising,” he advices. The social media expert also points out how there will always be a few loyal customers who choose to stand by the brand even during a controversy. “These followers are important. Nurture the conversation happening among this set and amplify that positive sentiment. Change the sentiment from negative to neutral with those positive conversations,” he adds.

While social media undoubtedly offers visibility, this visibility is short-lived. And this is why Hitesh feels that social media controversies do not tangibly impact a brand. “You don’t have to worry about anything. Out of the millions of Twitter users, people who create negative hashtag trends are a small subset. Many of them are either fake accounts or parody accounts. Real people who might tangibly affect your brand rarely indulge in such conversations. So, worrying about Twitter outrage is the last thing brands should do,” he avers. However, Anoop thinks differently. Underscoring how old posts are often raked up to malign an individual or brand he says, “Your post never disappears, for people can take screenshots or use old posts in new contexts to malign your brand. Also, there is the issue of using you updates in the wrong context or tweaking your post using Photoshop. It’s difficult to convince people that your post has been misused or isn’t yours in the first place.” he says.

Aniketh D’souza, Director of Mindstorm, however feels that social media outrage cannot really impact a brand because need will always trump an issue. “Whatever happens on social media is temporary. Brands get affected only if the product or service is genuinely bad. Otherwise, need makes you forgive and forget. What social media does is it helps you get in touch with the right people faster, compared to if you had to take the traditional route. It minimizes your time spent, that's all,” he concludes.