Malvika Iyer is on a mission to sensitise everyone about living around people with disabilities. 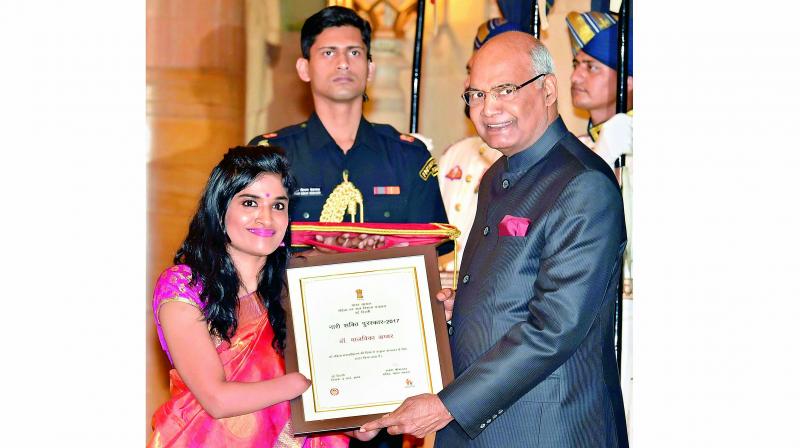 Malvika Iyer was once travelling somewhere and a gaggle of kids and teenagers questioned her about her hands. Thanks to injuries suffered in a blast in 2002, Malvika lost both her palms, but didn’t care much for prosthetic palms.

It was when she saw even little kids pitying her that she realised youngsters needed to be sensitised about living around people with disabilities. “That kind of shocked me. I wondered what — in their minds — was wrong with me,” says the 29-year-old. “I realised we had to target the young people, to tell them what disability first meant and to make it a part of society. How would these youngsters, on growing up, think of people with disabilities in terms of marriage and unemployment?”

She quickly turned it into her thesis and earned her PhD about three months back.

Malvika has been a popular name when it comes to inclusivity, even before she turned to it academically. Having headed many TEDx talks and speeches, she recently also became the subject of a graphic novel called MAI.

A project by Shriram Jagannathan, MAI is a project close to Malvika’s heart. “It’s my nickname, you know?” she beams, with a slight chuckle. “Shriram first got in touch with me a year ago and told me how inspired he was by my story. He wanted to write about me. I loved the idea of a graphic novel, because it showed everything quite well.”

While the finished product is filling the young woman’s heart with pride, she charts the heart-wrenching journey the making of it was. “I’ve given a lot of interviews since my accident, but this went a step further since I had to share my childhood stories with Shriram. I don’t feel the physical and emotional pain from the accident, but narrating it was overwhelming,” she reminisces. “When it was my mom’s turn to share the story, she broke down. She’s a strong woman, and it’s only because of her that I’m here. But this book is special because it has some rare stories. There were times I wanted to give up — so much pain and blood, and such gory sights. And now I see I crossed all that and I’m in a place where I’m being an inspiration, this book makes it even more special for me.”

It’s been a rather interesting few months for Malvika, with accolades and achievements coming her way. Besides the PhD and the book, she was feted with the prestigious Nari Shakti Puraskar by President Ram Nath Kovind on March 8 this year.

The winners of the award were also invited to Prime Minister Narendra Modi’s house for a personal chat, and Malvika proudly tells us that he congratulated her. “It was humbling. But I realised it was only the beginning of my journey. I have so much more to do for people who look up to me. These awards make you want to do so much better,” she sighs with a smile.

Underneath her powerful yet charming persona, Malvika is your everyday 20-something. Besides using the social media to talk about everything she’s passionate about, Malvika is also using her voice to talk about inclusive fashion. “I’ve done two ramp shows too!” she tells us. “I’ve always been fashion conscious, but struggled to find clothes that are accessible. And so I choose to advocate better fashion, because why should it just be for ‘normal’ people?”