Namrata Purohit, started teaching pilates at age 16 and has a long list of celebrity clients to her credit. 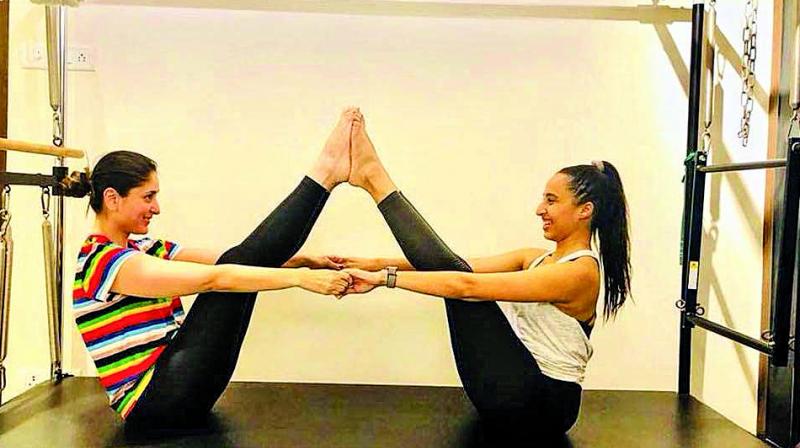 At the age of 16, Namrata Purohit found her calling and became the youngest trained Stott Pilates instructor in the world. By the age of 19, she had completed all pilates related courses and co-founded

The Pilates Studio with her father Samir Purohit. Now at 25, Namrata has emerged as the Pilates queen of India, with the who’s who from the entertainment and sports industry including Pilates to their fitness regime. Pilates is the art of controlled movements, which should look and feel like a workout.

For someone who has always been a sports enthusiast, a knee injury at 15 after a fall from a horse almost brought her squash career to an end. “Fitness has always been part of my life in some form or the other. I have played sports throughout my life. After the injury, I was told was wouldn’t be able to do all this,” she recalls.

But in 2009 when her father introduced her to pilates, Namrata still in her teens instantly fell in love with the workout as it eased her knee pain. “After doing Pilates, I was absolutely pain-free. That is when I became a believer of it,” asserts the Pilates trainer.

Along with running a studio, Namrata efficiently completed her masters in sports management from Loughborough University in the UK. As the word spread, her clientele included celebrities like Kareena Kapoor Khan, Sara Ali Khan, Janhvi Kapoor, Malaika Arora, Bipasha Basu, Dhaval Kulkarni and Sania Mirza to name a few.

Kareena, one of her regular students, has all the praises from the pilates instructor. “Right after Taimur was born, she had to lose her baby fat. She was shooting as well but despite that, she was in class at least five days a week at 12 pm sharp,” she says, adding, “She is a mischievously obedient child. When I give her an exercise, her face says ‘Why I have to do it?’ but she immediately does it. At times when I try to let her go off an exercise, she will insist that she has to do it.”

For the chirpy Sara Ali Khan, the case is not different. “She is a great human being and one of the most hardworking people I have come across so far. There are times when I tell her that we are done but she is just not convinced and wants to do more. No matter how far she is, she will make it a point to come to the class. She knows that fitness is an extremely important part of life,” says the instructor and adds that Sara’s liveliness has caught up with the people in the studio.

Though she considers herself lucky in terms of dedicated students, the fitness enthusiast emphasis, “Be it Sonakshi (Sinha), Mira (Rajput) or Shahid (Kapoor), all of them know the importance of being fit and they give me their 100 per cent which makes the job easier.”

Janhvi Kapoor who started training with Namrata after an injury is one of her most focused students who don’t even rest on a Sunday. “She is in love with pilates. I have to tell her that rest is good once in a while. In fact, even today we had a discussion and she was asking me if she can come on a Sunday since it was Holi ahead in the week,” she laughs.

Her oldest student Malaika Arora, who has been training with Purohit for the last nine years, has come a long way. “In last seven years, we have not had two similar classes. We are constantly doing different things. She is always willing to try something new and loves hanging,” she smiles.

“I recently went to Raja Ampat in Indonesia for scuba diving. I stayed on a boat for 10 days, diving to different places. Next, I am going to Galapagos in South America in July. Then I’ll be off to Germany soon to see if there are workout regimes or innovations that can be brought back,” she concludes.