In pursuit of happiness

As India slips down the UN Happiness Index, we decode why Indians are unhappier than their neighbours. 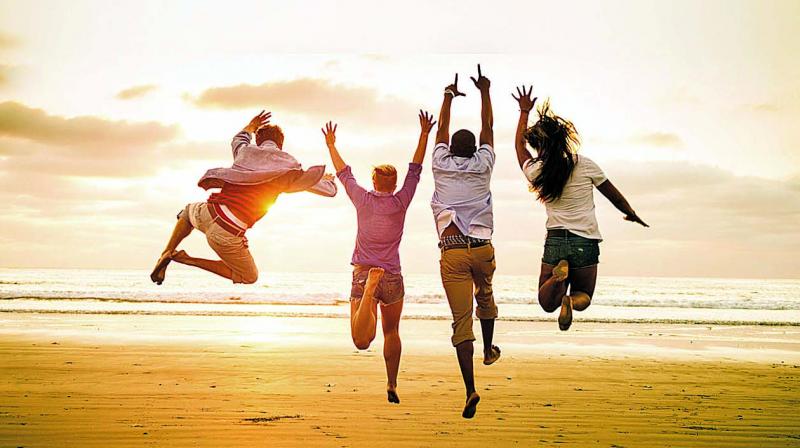 Indians are not as happy as they were last year, according to this year’s UN World Happiness Report. The country figured among the lowest 20 at 140 out of the 156 nations ranked, dropping seven places from 133, last year. This is the second consecutive year India slipped down the happiness index while neighbouring countries of Pakistan, Nepal, Bangladesh, Bhutan and Sri Lanka are ahead in the count.

So what makes a country happier than the others? Along with life expectancy, social support, per capita income, freedom, trust, health, corruption and generosity, the results also correlate with other factors like GDP and social security. If that was the case, India should definitely have ranked higher than all our neighbours, as the country is the fastest growing economy in the world.

Taking a note of the concerns in last few years’ reports, various state governments have come up with programs to increase the level of happiness among people. In 2017, Madhya Pradesh formed a happiness department, followed by Andhra Pradesh and Maharashtra. Last year, Agriculture minister Chandrakant Patil announced Happiness Ministry under the Relief and Rehabilitation department, intended to encourage positivity among the residents. When the project was still at its nascent stage, Additional Chief Secretary for Relief and Rehabilitation department, Medha Gadgil informed in her earlier quote, that the department is planning to start the project with a survey. “The concept is quite abstract, so this won’t be like the usual government schemes. We are looking at how to make things better for the people,” she said soon after the announcement was made. She also informed that the department would be promoting generosity and better time management and were looking for experts to come on board to help them with innovative ideas.

But all their plans have come to a naught as the ministry is still at the planning stage. Madhya Pradesh, on the other hand, now has Rajya Anand Sansthan in Bhopal to ensure the holistic advancement and happiness of its citizens. However, the government proceeding is same as the earlier happiness department. The section provides psychological methods and tools that help in inducing happiness among people. The department works with different panchayats (local councils) of the state to reach its major population in the interiors of the state. “We have different programs to improve happiness and well being among people. We follow a research which encourages socialising for inducing emotional well-being; so we try to organise more social events,” Says Akhilesh Argal, the CEO of Rajya Anand Sansthan.

Aiming to be the top three states in the country by the year 2022 and the most developed state by the year 2029, Andhra Pradesh envisioned Happiness Commission last year under the AP State Development Planning Society, APSDPS. As the state treads on the path of achieving its vision, it recognised that a happy, inclusive and globally competitive society is one of the fundamental requisites. “Setting up the Happiness Commission in Andhra Pradesh is an attempt to establish a dedicated institution to monitor levels of well-being and happiness at the ground level, analyse data from regular surveys, and co-ordinate with different departments to highlight and implement global best practices to increase levels of economic and social progress,” informs Sanjay Gupta, IFS, Secretary - Planning Department and CEO at APSDPS.

Talking about the commission’s objective, Sanjay says the objective spans over three spheres – securing a better quality of life by ensuring low levels of pollution, congestion-free roads, increasing the ease of living in terms of effortless accessibility to government services, and improving the happiness amongst the citizens. “The Happiness Commission aims to create a support system which shall overlook health and education, safety and security, and work towards reducing corruption within the government as well as business,” says the officer.

While MP’s Happiness department ensures multiple activities like Aanand Sabha, Aanand Calendar, AP’s happiness commission organises adventure and outdoor activities such as Happy Sunday and various trekking and hiking programs. Apart from that, AP has also been at the forefront of assessing happiness quotient of the people on the basis of healthy lifestyle, ease of life, protecting natural resources, and behavioural changes. In the last index study as per the United Nations Sustainable Development Solutions Network (UNSDSN) methodology, AP secured an equivalent global rank of 74 in 2017, it registered an impeccable improvement in 2018 with a rank of 47, “which compares extremely well to India’s rank of 122 (2017 ranking) on a set of five defined parameters,” reveals Alen.

When asked about the current UN report, CEO Akhilesh explains that a small number makes a difference in those surveys but that doesn’t mean that Indians are not happy. “There is a possibility that some countries may have done some small work and the numbers have changed. But happiness is more dependent on our mental state, though we need a conducive environment and for that, people need to socialise. That’s what we are trying to do,” insists the CEO.

Consultant psychiatrist and founder of The Free Mind Initiative, Dr Alpes Panchal relates happiness with philosophical as well as psychological elements. He informs, “Science has tried to quantify happiness in many ways like measuring serotonin levels in the brain, checking behavioural patterns or simply asking if one is feeling happy,” says the doctor. He also points out repression as a reason of depression and anxiety. “Repression could be in many forms and looking at the devastating state of our country, this very well could be the reason of our happiness index decreasing,” he asserts. To battle with the issue doctor suggests, “The more social people are, the brain produces more serotonin and such people seem to report having a happier life than people with less social bonds.” He suggests people to step out of the mundane and make real connections with real people, “That is the only key to happiness.”

On the other hand Clinical Psychologist Monica Sharma blames the modern and complex lifestyle that is leading people towards unhappiness. She also avers that the source of happiness has shifted from inner happiness to materialistic contentment, which is leading to fear of public opinion. “Individuals are busy from head to toe in their daily life so they have less involvement in social life. The increased level of competition and low ability to accept failure is leading an individual to live unhappy life,” insists the psychologist. She also suggests that one should take charge of own happiness than being dependent on someone else. “The main source of happiness is accepting what is out of your control. Accepting is not being passive but a wise act when it’s out of your control,” recommends Monica.

While various state governments and public welfare organisations are pushing their boundaries to induce happiness in the country, the current report still raises a question mark on their proceedings.