Are you prone to sudden bouts of sweating, tremors and anxiety? You could be suffering from hypoglycaemia. 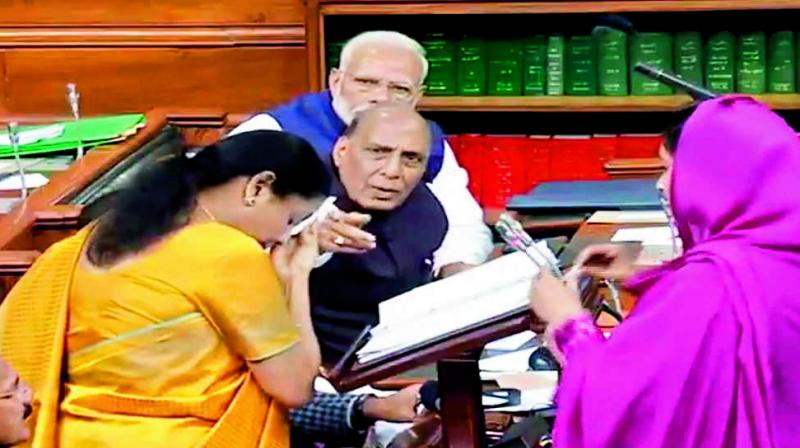 Finance Minister Nirmala Sitharaman seen trying to wipe the excess sweat off her forehead. She was offered candies and advised to sit down. Reportedly, her blood pressure had fallen that caused the perspiration.

While presenting the Union Budget recently, Finance Minister Nirmala Sitharaman suddenly started sweating. She was offered candies and advised to sit down. Reportedly, her blood pressure had fallen. When sweating is accompanied by dizziness or light-headedness, it may signal an underlying health issue, like low blood sugar levels — hypoglycaemia — which may be caused by a drop in blood pressure. The other symptoms of hypoglycaemia are hunger, shakiness, anxiety, irregular heartbeat and pale skin.

Hypoglycaemia occurs when there is not enough glucose in the blood. “Glucose is the primary fuel for the body, particularly the brain. Hypoglycaemia interferes with the brain’s ability to function properly. Normally, the body is well adapted to defend itself against hypoglycaemia, drawing from glycogen stores in the liver and muscles, which are sufficient to produce enough glucose to maintain optimum levels for hours and even up to a day. Even after prolonged fasting, the body can take care of itself by a process called gluconeogenesis — breakdown of lipid stores and protein,” says Dr Pavan Gorukanti, Internal Medicine Specialist and Director, Yashoda Hospitals Group.

Hypoglycaemia also triggers the release of hormones such as epinephrine and norepinephrine, which adds to tremors, sweating, rapid heartbeat, anxiety and hunger. “As the brain in particular is very metabolically active and dependent on continuous supply of glucose for energy, hypoglycaemia even for a few minutes, or recurrent episodes of even briefer hypoglycaemia, can potentially cause serious damage, and in extreme cases, coma and death,” warns Dr Gorukanti.

“The most common cause of hypoglycaemia is anti-diabetic medication /insulin overdose, particularly against the background of poor food intake or excessive exercise,” he explains.

Hypoglycaemic symptoms may occur occasionally even in the most normal people, but they are usually of very brief duration and self-limiting. This is termed reactive hypoglycaemia. “Usually, after eating, in response to a rise in blood glucose levels, insulin is secreted, which drives sugar uptake into the cells. Sometimes this insulin response overshoots, causing hypoglycaemia and associated symptoms. But usually, counter regulatory hormones like adrenaline and glucagon are activated, driving up sugar levels to normal range but producing some of the above symptoms in doing so,” says Dr Gorukanti. He cautions that these symptoms are “more pronounced in the elderly, people with impaired glucose tolerance or hormonal imbalance, those under excessive stress, patients who have undertone bariatric surgery, etc.”

Other more serious causes, like insulin secreting tumours and genetic enzyme defects may also cause hypoglycaemia, but these are extremely rare.

“Brief, transient episodes usually respond well to glucose, cookies/crackers and intake of other simple carbohydrates, and normally, we don’t need to worry about them. But frequent or recurrent attacks are to be taken very seriously and a full work-up is warranted. In severe cases, in addition to glucose ingestion, immediate hospitalisation in an ICU, close sugar monitoring and medication like glucagon and continuous IV glucose infusion may be required to avoid serious consequences. It is best to take expert help immediately,” says Dr Gorukanti.