The fourth edition of Parinee Juhu half marathon saw thousands of Mumbaikars running for the charitable cause of pediatric heart surgeries. 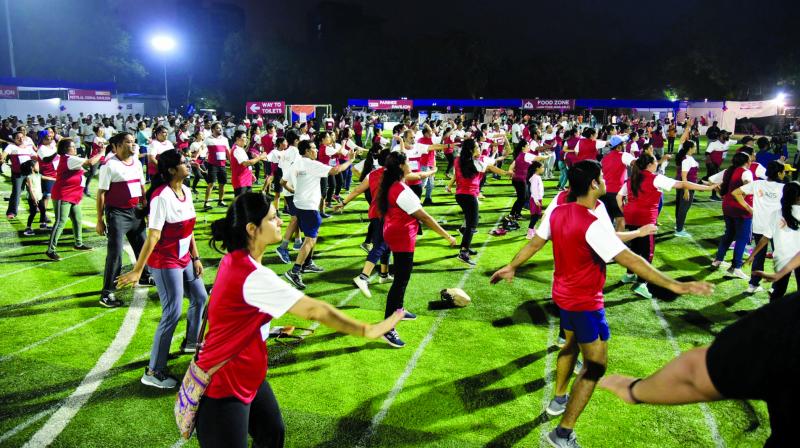 Promoting a healthier lifestyle, which will contribute towards a fitter self, Parinee Juhu half marathon saw thousands of Mumbaikars putting on their running shoes on Sunday morning.

Promoting a healthier lifestyle, which will contribute towards a fitter self, Parinee Juhu half marathon saw thousands of Mumbaikars putting on their running shoes on Sunday morning. The marathon was divided into two timed race events of 21km and 10km, besides a race of four km, each of which culminated at the starting point that is the Jamnabai Narsee School Grounds, Juhu.

Commencing from the school’s ground, the runners followed the through the tree-covered JVPD bylanes, crossing the I love Mumbai sign, JW Marriott, Juhu Promenade to the newly renovated Lions Garden towards Bandra National College. The marathoners – men, women and children alike – finally reached Amarson store in Bandra, and then took u-turn from there to finally end their run at Nana Nani Park in Versova.

Further, to encourage the marathoners, actors Zayed Khan and Sonnalli Seygall made their presence felt at the flag-off, bright and early at 5:30 in the morning. The event was followed by prize distribution at the hands of the celebrities. “It was indeed a pleasure to have Zayed and Sonnalli to be part of the marathon from the flag-off at early in the morning to until after 9 am when they distributed the prizes to the worthy winners,” says Atul Parekh, Vice Chairman of Get Fit Thru Sports Foundation – one of the organisers of the event.

Moreover, the marathon not only raised awareness about making healthier decisions but also went ahead by facilitating a noble and charitable cause of pediatric heart surgeries. Organized by Get Fit Thru Sports Foundation and the Rotary Club of Mumbai Airport under the aegis of Maharashtra State District Athletic Association (MSDAA), the certification issued by the Parinee Juhu Half Marathon is valid for all major marathons.

Talking about their latest cause, Biren Parekh, the President of Rotary Club of Bombay Airport averred, “Our hearts beat for theirs. Our club tries its best to take responsibility for these children. Through sheer dedication and collective effort, we have made this marathon possible for the fourth time now.”

On a concluding note, Bharat Kapadia, the Chairman of Get Fit Thru Sports Foundation said, “It is always a pleasure to be associated with the Parinee Juhu Half Marathon. Collectively, all of us have done a mountain’s work in very less time and I’m glad we could pull this sporting event off so well.”