Odissi building on the past

A two-decade journey of Odissi dance. 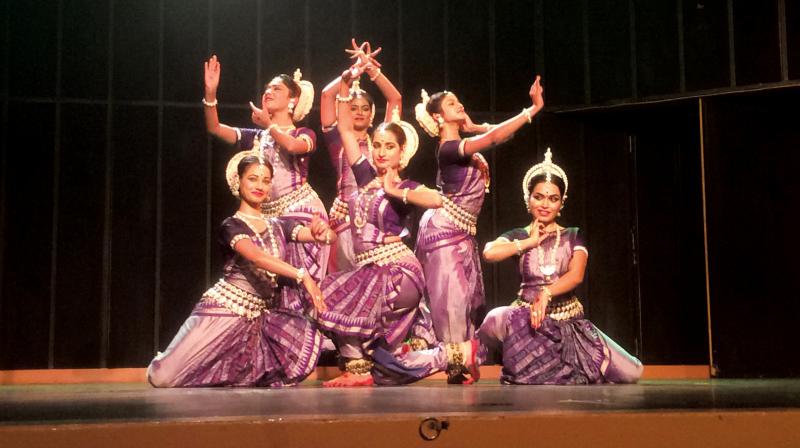 A dance ensemble must work together for years to have the coordination and absolute consistency of synchronisation required of world-class performance companies.

In 1993, Ratikant Mohapatra convinced his father, Padmavibhusan Guru Kelucharan Mohapatra, to establish their personal dance institution Srjan. At the time, Kelubabu was in his late 60’s, happily and securely based at the Odissi Reseach Centre (ORC) created in Bhubaneswar by one of his pre-eminent disciples, bureaucrat KumKum Mohanty. ORC had facilities and staff to support creative new work, research and teaching. In retrospect, the creation of Srijan was a wise decision for the future of Odissi.

Though his father encouraged Ratikant to explore his own ideas in dance, the son sensibly was unwilling to do so while the master architect of Odissi was still able to do so. After Kelubabu passed away, the institutional structure of Srjan provided the perfect environment for Ratikant to explore and develop his choreographic ideas. Today the training of disciples by Ratikant and Sujata Mohapatra performing Ratikant’s choreography have positioned Srijan in the forefront of Odissi dance companies and definitely among the very best in India. Srjan’s performances appeal to a wide range of audiences, youth and uninitiated general audiences to connoisseurs.

A dance ensemble must work together for years to have the coordination and absolute consistency of synchronisation required of world-class performance companies. Similarly, an individual solo dancer needs a consistent and dedicated set of musicians for years to have the freedom to improvise and develop new ideas in movement and textual interpretation in front of the audience. Those that come immediately to mind include the Aditi Mangaldas Dance Company, Kalakshetra, the Nrityagram duet company and Srjan.

Srjan celebrated the 91st birth anniversary and of Guru Kelucharan Mohapatra with a two-day festival in Delhi and, as ICCR director Amarendra Khatua said at the inauguration, “the journey of Odissi to a global platform.”

The two evenings showcased an array of stand-alone compositions. I was happy to see that the new directions in choreography are keeping the tradition and art alive for solo as well as group performance.  This is a challenging balance and takes commitment and skill. There are excellent dance gurus whose students are well honed to dance as part of a group but cannot hold the stage alone.

Rajashri Praharaj did a fine performance of the Odia Sita Apaharan with the demanding nritta woven into the strong Natya mono-drama of multiple characters from Ram to Ravana.  Rajashri’s inherent sweetness of nature comes across in all her dancing though I believe she loves the opportunity to embody the male characters and she carries off all the characters clearly and with complete conviction.

By chance, I happened to see solo performances of three other Srjan dancers and was impressed with their solo performances of Kelubabu’s style filtered through the aesthetic of Sujata Mohapatra, possibly the leading dancer of Odissi today.  London-based Natalie Rout, American Sonali Mishra and Maria Laura Valdez from Peru all performed extremely well at the 1st Shree Jagannath International Festival.  Though I missed seeing Maria in the festival, she repeated her performance for me when she came in the following days to learn a Geeta Govinda Ashtapadi composition of Guru Kelucharan Mohapatra from me.

With a base of solid training and coordination, the hallmark of Srijan choreography is “Wow” movement that usually starts at a fast pace and zips along, yet with dynamic variations to sustain interest throughout.  This is dance made by and for generations accustomed to fast-paced media like MTV more than two and half hour solo or all night Kathakali or Manipuri performances gradually building to an experience of Maharasa.

Ratikant humbly introduced his work as neo-Odissi, but this is truly not the case. It is pure Odissi developing organically as the streams and river of traditional art move forward. The opening of the Antardrishti festival was appropriately a re-choreography for the company of Kelubabu’s Ardhanarishwar, originally made for Sanjukta Panigraphi and indelibly etched in memory for those who saw it across India and the globe.

At times a central figure of Ardhanarshwar was created with two dancers inventively allowing four arms to capture the non-duality of the male and female aspects of Shiva-Parvati with one dancer hidden behind the other.  When four dancers created the identical Devi, there was no sense of the old fashioned “group solo” of yesteryear’s group ensemble; instead, the quickly changing groupings melted from image to image.  I loved the image of two dancers each facing each other from down-right and up-left diagonals with another two dancers in the centre.

In short, the use of space by dancers in constantly changing configurations could not have been better. It was also a pleasure to see that all the individuals were at varying times featured in front or initiating a phrase.

Lighting was a full partner in the choreography. This does not mean that it called attention to itself with irrelevant effects but rather that the communication of the dance was not only enhanced by good lighting but actually choreographed with the participation of the lighting designer.  Devi Prasad Misra trained under the remarkably creative Joyadev , Srjan’s longtime lighting designer. As Devi Prasad is part of the daily rehearsals. Again and again, powerful images were not only more effective but only possible with the collaboration of light.

Dancers sitting in a circle on the floor with their feet splayed out were a gorgeous image in partnership with the top and angled blue lightning, it would not have worked in full light and would not have been there without full confidence in the light as equal to space and rhythm in the choreography. Vishwas dramatically highlights the common spirituality of various religions.

The ecstatic rolling of the boatman in front of Ram was a powerful expression of Bhakti when done by Kelubabu in full light; here the same feeling was communicated effectively by careful minimal lighting framing several dancers rolling. Jesus on the cross was a vivid image thanks to the movement –light partnership and the cremation scene with mourners top lit as Sanjay Kumar Behera was carried as a corpse on the shoulders of four dancers with focused light.

The choice of speed in Odissi is not new; Sanjukta Panigrahi, the undoubted finest female artist of the first generation of Odissi’s revival, expressed a dynamic energy and speed in her dance that necessitated some sacrifice full bends of body and torso at times.  In rehearsal, I always saw her fully realise movement that was slightly reduced in performance because of speed.

Similarly, Ratikant’s choreography moves quickly, and he has made well-conceived variations on some typical arm patterns so that there is no need for dancers to change the torso with each step. This adds to synchronisation of the group and the needs of the time, though I did miss the torso movements just a few times.Kelubabu’s group composition to Vande Mataram, was a fine way to see the elegance of form at a moderate pace with exquisitely crafted tableau. The images of nature: lotuses, deer, elephant and the beauty of Bharat, the ploughing and planting had the special magic of the master. It is good that we have the treasured teaching and compositions of Kelubabu with the subtlety of expression and nuanced evocation of rasa and also the splendid, dynamic, world class Srjan choreography of Ratikant Mohapatra.

Sharon Lowen is a respected  exponent of Odissi, Manipuri and Mayurbhanj and Seraikella Chau whose four-decade career in India was preceded by 17 years of modern dance and ballet in the US and an MA in dance from the University of Michigan. She can be contacted at sharonlowen.workshop@gmail.com.