Local women team up with an ngo to knit sweaters to help elephants stay warm in winter. 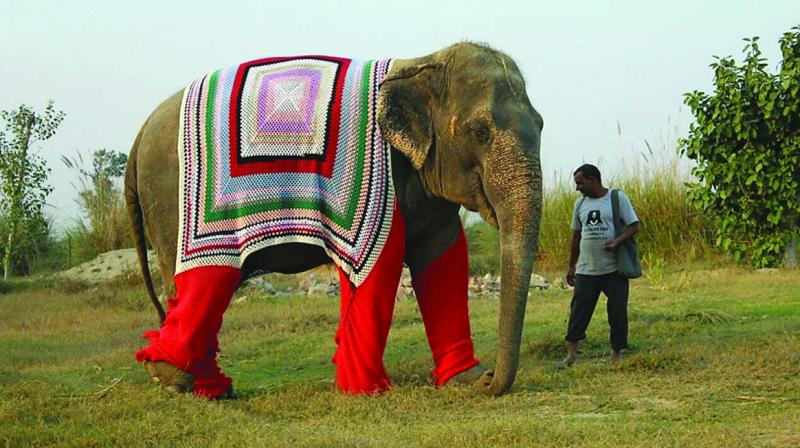 An elephant in a vibrant jumper knitted by Wildlife SOS.

To help elephants fight the bitter cold in north India, Wildlife SOS Elephant Conservation and Care Center in Mathura thought of knitting sweaters. It took about four weeks to make the jumpers, shares the NGO. Local women, with the guidance of their volunteer Kamini, made this project possible.

“The idea slowly evolved after we started making blankets for our elephants. Our co-founders, Kartick Satyanarayan and Geeta Sheshamani, thought it would be great to have jumpers to keep the elephants warm, so we decided to try it as a pilot project,” says Arinita Sandilya from Wildlife SOS.

The centre hosts around 20 elephants who are either blind, lame or recovering in different ways. These elephants have been rescued from illegal activities, trafficking mafia, circuses and street begging, where they were being abused. “It is important to keep our elephants protected from the cold during extreme winter, as they are weak and vulnerable having suffered so much abuse, making them susceptible to ailments such as pneumonia. The cold also aggravates their arthritis which is a common issue our rescued elephants deal with,” says Kartick.

To keep the elephants warm and get the right fit came as a challenge for the organisation during this project. “As we fitted the elephants with their warm clothing, Chanchal, one of our younger elephants, started pulling at one end and kept undoing the bits as we would complete one end. She also shook like a dog in a bid to rid herself of this new appendage! We found it so funny that we all fell on the ground laughing,” Sandilya shares.

“Caring for elephants is always a financial challenge — whether it’s buying fruits or medicines for them, or getting them warm covering or securing land for their future, as the size, areas and volumes are jumbo sized,” adds Sandilya.

With the holistic belief that providing sustainable alternative livelihood and education to communities dependent on wildlife and natural resources would lead to sustainable wildlife protection, Wildlife SOS was established by Kartick Satyanarayan and Geeta Seshamani in 1995. Today, the organisation has evolved to actively work towards protecting Indian wildlife, conserving habitat, studying biodiversity, conducting research and creating alternative and sustainable livelihood for erstwhile poacher communities or communities that depend on wildlife for sustenance.

Geeta Seshamani, Secretary and co-founder Wildlife SOS says, “The rescued elephants under rehabilitation at Wildlife SOS have been rescued from shocking circumstances. We aim to provide them with a safe habitat where they can live like elephants.”

Wildlife SOS is also responsible for resolving man-animal conflicts while promoting and educating the public about the need for habitat protection. “We also emphasise the value of off-site research in veterinary areas, behavioural studies, reproductive physiology and other fields in collaboration with national and international universities and organisations,” says Sandilya.

“We encourage volunteers to help in various ways. It is one of the most interesting ways to learn about the role of conservation as well,” Sandilya explains.

Their upcoming projects include establishment of an international elephant hospital, expansion of elephant conservation centers and forest restoration projects.