Myths told through dance that resonate with today’s audiences

Myth with its emotions and moods, at the existentialist level, will remain relevant. 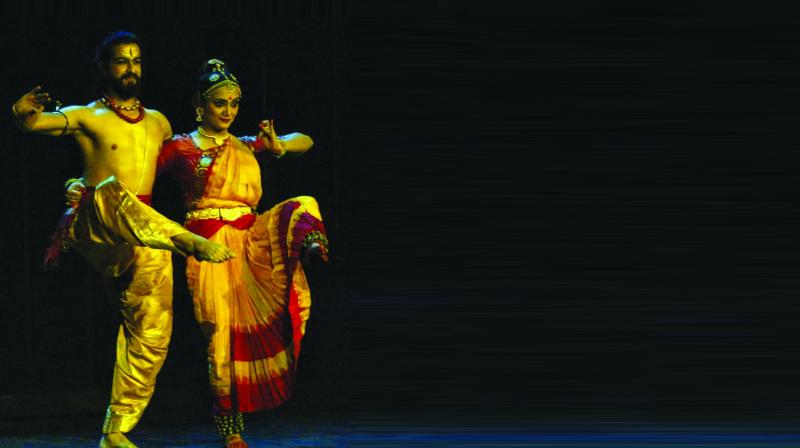 Watching the engrossing recital Trayambakam presented by Rasa United at Stein auditorium, one wondered about the oft-expressed statement that overused and cliched mythological tales cannot make for riveting dance. My thoughts went back to how the performance journey of Rasa United had started when dancer/choreographer Vanashree Rao after 32 years of an eventful career in Kuchipudi, as a soloist and one of a duo with her husband, Jayarama Rao, was compelled into a quiet period of rest, away from the stage, due to temporary health problems. Distancing herself from frequent performances in the traditional Kuchipudi margam format on recovery, while her commitment to teaching and training disciples continued undiluted, she started exploring ways of reinventing her artistic stage personality and even as her mind jostled with ideas, the beginnings of Rasa United were forming in her mind. Pondering about artistic choices, she decided to seek the opinions of like-minded friends in the art world — mainly Dr S. Vasudevan, Bharatanatyam teacher and performer and a fine singer with an in-depth knowledge of music and S. Venkateshwaran, a fast evolving, refined Carnatic vocalist with a golden voice and composer, along with a few others — all enthusiastically responding to her proposal of forming a dance company where all members would enjoy equal benefits. Rasa United was established in 2016 as a multi-dance company, the artistes on its roll belonging to the Bharatanatyam, Kuchipudi and Chhau disciplines. The object was treating stories from mythology using the three dance forms in a seamless meld, while preserving the purity and integrity of each form. And thus began a success story which has been legion!

Vanashree’s concept of Trayambakam (the Threefold God) extols aspects of Shiva who represents the Supreme Consciousness controlling time past, present and future. As Aghori, Absolute Nirguna, Shiva is the formless manifest. He is also Saguna, the Manifested One. As Ardhanariswara, he is the cosmic procreator uniting Kameshwara and Kameshwari, embodied in one entity, where opposites like Purusha and Prakriti reside in complementing togetherness. Through three scenes of Aghori, Ardhanarishwara and Kiraataarjuna, Trayambaka, enveloping a gamut of moods and situations, was expressed through the three dance forms, with unique choreography.

The strength of the group has been in its open-minded members, willing to explore possibilities. Much of the impact in Trayambakam came from the very original music. The scriptwriting of Vanashree comprised inspiration from various sources of literature and for the next step of composing the music, she and the musical minds of Rasa United put their heads together to create a score evoking the kind of ambience that the choreographer envisaged. The first scene evoking Nirguna Shiva based on Tulsidas’ verse, “Bhasma anga mardana ananga” from the Shiva Purana portrayed intoxicated sadhus singing and dancing in abandon in the crematorium grounds chanting “Har Har Mahadev”.

The unconventional music played on words and sounds and rhythmic syllables, sung and chanted backwards and forwards at various speeds with the “bambambamba” damaru sounds, with percussionist Kesavan helping by bringing in the different percussion instrument tones from Mridangam, Khanjira, Edekka, Tavil and Ghatam — all build up to a soundscape evocative of otherworldliness. A chant repeating in a threefold pattern words like “bhavam”, “shivam”, “mridam”, “param” with the last word in each chant including the feminine forms of Shivani, Bhavani, mridani, purani made for some potent mood evoking.

The choreography with Chhau dancers, Kuleshwar Kumar as Aghori and Ram and Arjun Dev Malik as the sadhus, in the broad leg sweeps, leaps, head stand, and one-legged stances of Chhau provided that look of unbounded abandon with some Hatha Yoga, evoking, along with the soundtrack, the slightly ghoulish, beyond normal feel.

Shiva in his Nirguna/Saguna entirety was always a part of the scene while aspects of him were being portrayed by compelling performer Dr Shridhar Vasudevan using both nritta and abhinaya, with lasya and tandava elements in various formations and postures. As the saviour of Markandeya (dancer Ayana Mukherjee) from the death noose of Yama, Shiva established his power over time — past, present and future — and here Shiva cannot be complete without reference to his non-personified form as the Dwadasha Jyotir Lingams spread over the country and the interpretation with mudras went with the Sanskrit text “Saurashtre Somanatham cha Srisaile, Mallikaarjune Ujjainyaam, Mahakalam Omkaara mamalleswaram”. In life or after death, it is the same Shiva one prays to, for he is the God who presides over all aspects of life. With the Bharatanatyam of Dr Vasudev, dancers of Chhau and Kuchipudi involved in all these quick moving scenes, to very imaginative choreography, were Kuleshwar Kumar Thakur, Arjun Dev Malika, Prashant Kalia, Arjun Dev Malik, Ayana Mukherjee and Moutushi Majumdar.

In the next episode came the wonder of the ash-covered, tiger skin-clad God as Ardhanariswar. The total absorption of Shiva in his other half, is reflected in Shiva’s destructive anger when Parvati is insulted by Daksha with the latter’s entire clan destroyed, or in Parvati’s tenderness towards the “neelakantha” (blue throated) and bhasma-clad Shiva. Rendered to the Mahadev/Parvati Stotram and one verse from the Ardhanariswar Slokam “Mandara mala…” set to ragas Bhairav, Amritavarshini and Purvikalyani, were Prashant Kalia as Shiva and Moutoshi Mazumdar as Parvati in a duet combining brilliantly. Vanashree’s dance visualisation, blending an ecstatic Shiva in Chhau with a Kuchipudi, Parvati is one of the really riveting partnerships this critic has seen. Shiva’s movement ecstatically with Parvati’s grace abounding Kuchipudi in this scene comprised for this critic, the high point of the entire presentation.

The last scene of Kiraataarjuna saw the Mahabharata: Shiva disguised as a hunter challenging Arjuna the hunter for the preying on the boar. The arrows of both strike the boar simultaneously and the tussle which ensues finally pleases Shiva who, forsaking his disguise, gifts Arjuna with the Pashupata astra. Ayana Mukherjee in this scene plays Parvati to S. Vasudevan’s Shiva, with Arjun Dev as Arjuna. The song “Naagabhushana” for this scene was written by Dr Vasudevan himself. What one enjoyed was the enactment of Rohit Kumar Khanojia as the boar. His walk and the angle at which he kept his neck as he hurtled along were so typical!

The last scene, Mahishasuramardini, with Vanashree as Devi making a small entry, was based on raga Durga with the chant: “Ya Devi Sarvabhooteshu… shaktiroopena Sansthitha”, in Hamsanandi, made an excellent ending. Apart from the exceptional music, and the involved rendition, the costumes were excellent. And in a dance enshrining so many styles, with each retaining its individuality, while sharing performance space in such a smooth blend, was really praiseworthy — and the credit goes as much to the choreographer as to the dancers.

Myth with its emotions and moods, at the existentialist level, will remain relevant. With changing contexts, the response to a myth’s otherworldly dimension may be varied. But in blending both in such a way as to resonate with today’s audiences is where the strength of Rasa United lies. Myth is only an excuse. How you make use of this prop for your dance narration is where the level of success lies.