The capital witnesses another winter carnival with over 150 curated diverse pop-ups from across the country. 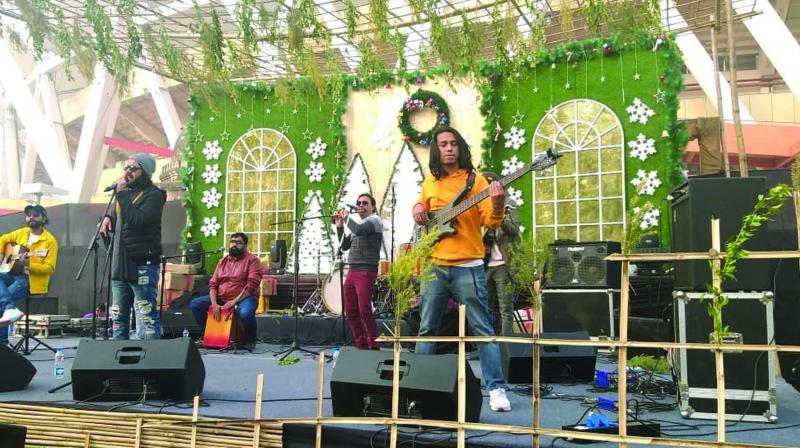 A still of the live performance at the Winter Bazaar

The second edition of Boho Bazaar in its Christmas avatar was a three days' carnival comprising food, shopping and music gigs which recently concluded in the capital. “As a result to Delhi's recent happenings, there were exhibitors who wanted to back out on Thursday. But then on Friday morning they wanted to rejoin as they felt that the situation was under control. We were very assured that there a number of carnivals and events taking place in the capital every day. There was absolutely no need to panic,” confidently voiced Gaurika Bubber from So Delhi.

A promising outdoor flea market and shopping carnival featured around 150 pop-ups from across the country, showcasing treasures mostly curated from vendors who sell only through word of mouth or social media apps. One can easily go for an eclectic bag of offerings such as hand-painted sneakers, chic head wraps, vintage jackets, fringe boots, printed dresses, quirky stationery, chunky silver jewellery, boho bags, and home decor collectables etc. What’s more is that almost everything was priced under Rs 1,000, thus not punching a hole in one's pocket.

Besides all the shopping options, there was an exclusive food and drinks zone featuring mulled wine and winter cocktails, thrilling games for the kids, performances by home-grown artists, fun activities and creative workshops. Members of a newly-found band, The Enlighteners, were delighted to get such an audience. “We are from Agra and it feels great that people out there liked our music. We have been into the industry for quite some time now and each time we perform, it feels great when our music penetrates our audiences to create a heavenly connect,” mused the band members. Their performance acted like fire and pulled the crowd to them. But they were not the only ones. The three days' gala invited budding performers from not only NCR but from the neighbouring regions and each one of their soulful music gave the visitors a chance to fill their souls.

Digant Sharma, Organiser and Co-Founder of Boho Bazaar, said on a concluding note, “With the Christmas-theme this time and so many fun new elements including a carnival for kids, it was only fair that the festival was organized at a much bigger venue. Thus we decided to move from Vasant Kunj (where the earlier edition took place) to Jawaharlal Nehru Stadium. We welcome everyone for our future editions to traipse over to the city’s wonderland.” Boho Bazaar’s Christmas edition served as one of the happening spots to spend the weekend making merry whilst shopping for last-minute presents to surprise one’s near and dear ones.