As cosplaying is beginning to seep into the mainstream culture, we take a closer look at the weird and the wonderful performance art. 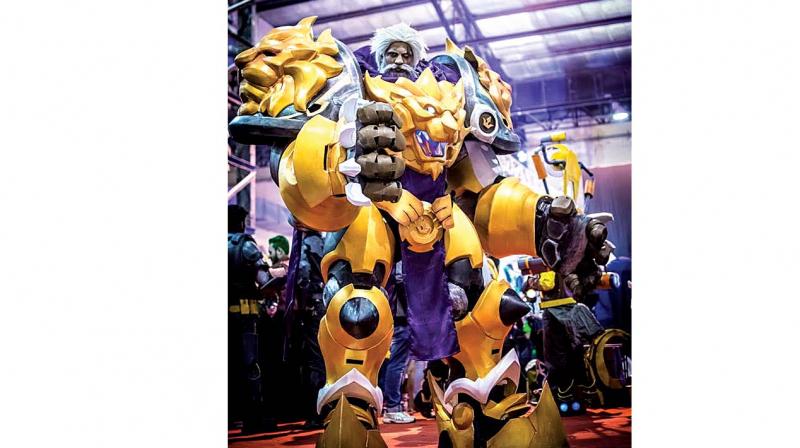 Jeet Molankar as Reinhardt from Overwatch.

It is said that imitation is the sincerest form of flattery, and that’s what cosplayers do to pay their respects to their favourite characters – they become them to the T. But slipping into someone else’s shoes is no mean feat, especially when that someone else is a blue-haired, green-eyed, metal-bodied, 10-foot tall intergalactic warlord who speaks in a language that resembles grunts. While this other-worldly transformation might seem daunting to some, cosplayers embrace the challenges that come with ‘costume play’, because it takes a great deal of out-of-the-box thinking to make an imaginary character ‘real’. And as this subculture is slowly but steadily seeping into mainstream culture, with several cosplayers even looking at making their hobby a profession, we take a closer look at the weird and wonderful world of cosplaying.

A really fancy dress
Since cosplayers turn to comic books, video games, cartoons, anime and manga for characters to dress up as, getups are elaborate and often, highly stylised. And though there is no rule that requires you to go the extra mile to create the perfect costume, serious cosplayers do so at their own will, and expense. Two-time Comic Con winner, and winner of this year’s Indian Championship of Cosplay, Jeet Molankar reveals that his winning costume raked up a steep bill of 70,000 rupees. “I was cosplaying as Reinhardt from the popular video game Overwatch. The character is 7.4 feet in height and since I wanted to stay true to the character, I had to build custom stilts.  It took me about 3-4 months to build the costume from scratch and cost about `40,000. Transporting the costume to the venue in Delhi was equally expensive,” he reveals. The cosplayer tries to up the ante every year and isn’t a stranger to such exorbitant budgets.

But Jeet says that cosplaying need not require such big investments, for, at the end of the day, it’s about playing dress up and having fun. “You can start off simple, as Joker from Batman or a character from Harry Potter. The point is that you get to be in someone else’s shoes for a day and that’s the fun part,” he says.

A cosmos of their own
While cosplayers might make up a niche group, the cosplaying community is an active one, with groups and forums all over India. Tanya Shringarpure, who is one of the admins of the largest, most-active cosplaying club in the country, the Indian Cosplay Community, reveals that the online club is made up of cosplay enthusiasts who use the platform to interact, share costume and makeup ideas, talk about their latest costumes and cosplay projects, co-ordinate planned cosplay shoots, and feed off each other’s passion for the art form. “Each of the bigger cities also has their own clubs; the Hyderabad and Kolkatta clubs are very active while Bangalore has the biggest cosplaying community. Cosplayers are a big, thriving community in the city as well as all over the country.” she shares.

Serious cosplayers also have a slew of prestigious events and competitions that they can participate in to prove their mettle. Gaurav Sawant who was awarded Cosplayer of the Year at this year’s India Gaming Awards, one of the biggest gaming award shows in the country, informs us that the popular Comic Con Cosplay Contest is just the tip of the iceberg. “I’m contesting for the World Cosplay Summit, which is held in Japan, this year. Then there’s also Chicago’s C2E2 Crown Championships of Cosplay, which is almost like the Olympics for cosplayers. As cosplaying has become more popular in recent years, several local and international contests have cropped up. But designing costumes that will hit a home run takes a stupendous amount of time, effort and money,” says the 26-year-old, who is all set to bring Shelob (the gigantic spider in The Lord of the Rings) to life at this year’s Comic Con.

Passion to profession
For many of these cosplayers, what started off as a hobby has now become a source of income. “Earlier, people used to cosplay for fun, because there was not enough information or support. But today, many companies hire cosplayers for their stalls and to interact with the crowd. There's a lot of opportunity in the gaming space and the movie space since both industries are replete with fascinating characters. Last year, AXN and HBO hired me for a Sherlock and Suicide Squad promotion events. The entertainment industry too is using cosplayers, so the demand is emerging,” says Gaurav, who also takes on costume commissions. In terms of remuneration, Gaurav says that he charges up to `10,000 a day, depending on the event, while income from designing props could start at `5000, but could go up to a lakh if he is designing a large-scale installation. Cosplayer Tanya too charges a fee for cosplaying at events, while also hosting cosplay karaoke nights at a suburban eatery.

Aorin Shariyari, the country’s only professional cosplayer and Head of Cosplay at ESL India, reveals that she mentions ‘cosplayer’ as her occupation on all official documents. “As a professional cosplayer, I no longer participate in competitions, but I help create and organize them. I also design costumes for myself and professionally, and have made about 120 costumes till date. Being a professional cosplayer is not just about dressing up, it involves organising, managing, PR, community management and engagement and lots of other activities,” says the cosplayer, who charges anywhere between `10 to `25,000 for an event, while also getting a steady monthly salary. Her company also hires cosplayers for its clients, thereby acting as a cosplayer talent pool.

A long way to go
Though cosplayers have started monetising their hobbies, Aorin says that making a living out of cosplaying is challenging, because a huge section of the population still doesn’t know what cosplaying is all about. “They think it’s ‘drama ka kapda’,” she jokes, while Tanya says that companies too can be stingy with payments because they don’t fully comprehend the work that goes into making a costume. Aorin suggests having a full-time job and using one’s cosplaying skills to add to one’s earnings.  Gaurav, however, is more optimistic in his outlook. “I think a lot will happen in the cosplaying space in the next few years,” he says, “And there’s nothing like making money from doing what you love.”