Of life and literature

Polymath writer Shanta Gokhale talks about why she wrote her debut novel, navigating the theatre world with the likes of Satyadev Dubey. 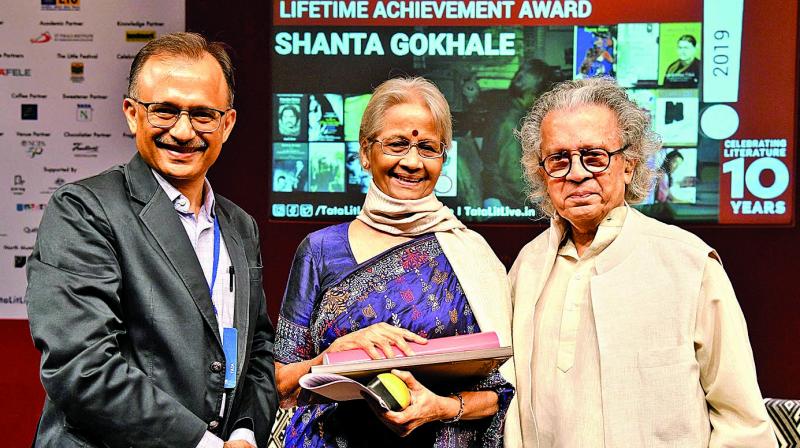 When Shanta Gokhale was working as a personal relations executive at a pharmaceutical company, the litterateur found herself surrounded by a vexatious phenomenon. Her two colleagues and two friends were having affair with married men, and time and time again, they would come to narrate their experiences and ordeals to Gokhale. “If these women hoped that those men were going to dump their wives to marry them, they were wrong. I felt extremely anxious and worried for them,” reminisces Gokhale. The only way Gokhale could calm her whirlwind of emotions and thoughts was through writing, and that led her to pen her first novel, Rita Welinkar. “These were strong and talented women and yet they were in complete subjugation to their relationships. So somehow, working on that novel and finding a way in which these women could re-claim themselves became really important to me,” reveals Gokhale about the novel written through the perspective of ‘the other woman’.

While the Marathi-language novel not only went on to win the Maharashtra State Award for the best novel of the year, it also was adapted for the screen by Gokhale’s actress-director daughter Renuka Shahane. In her 80 years of life, Gokhale has been a journalist, writer, theatre-critic, screenplay-writer, and translator, and with being conferred with Tata Literature Live! Lifetime Achievement Award, the humble litterateur is truly greater than the sum of her parts.

“I was constantly writing even when I was doing full-time jobs. I hopped around a lot, but the common thing was always writing,” remembers Gokhale. With a name that resounds in the talks of the literary and the cultural history of Mumbai, the bilingual writer had actually been most formidably known for her theatre-criticism. From being a theatre aficionado to theatre critic and historian, Gokhale’s world was indeed the stage. Navigating the theatre-scene with peers and friends like thespians Satyadev Dubey, Girish Karnad and Vijay Tendulkar among others, Gokhale remembers that they were all united for the shared excitement for the craft.

“The equations were extremely stimulating and totally comfortable because nobody was insecure about their work as they seem to be now. After a play or play reading, the group would tear it into shreds. If you liked it, you were generous with your praise, and if there were flaws, you pointed them out, and everybody would accept the criticism,” says Gokhale. Moreover, the playwrights would then take this feedback and use them in re-writing the plays. “It was a wonderful kind of relationship that was built. They were so down to earth people; it wasn’t like you were in awe of them, why would you be? We were peers,” gushes the writer, who then went on to write plays like Avinash, Dip and Dop and Rosemary for Remembrance among many other books on theatre. Even though Gokhale has been awarded a lifetime achievement award, she does not like to look back at her life. “I never look back, it’s so boring to do that,” laughs the litterateur. Although one can get an intimate look in her recently published memoir One Foot on the Ground — A Life told through the Body. At her friend and neighbour Jerry Pinto’s insistence, Gokhale penned an autobiography that chronicles her engagement with arts and culture through her body’s journey. “I have very strong body memories. I might forget people who have been important to me in at one point in time, I might forget events, incidents, but what has happened to my body, I remember every bit of it. If that is my strongest memory, then that has to be my memoir – the memoir of my body,” explains Gokhale on her decision to trace down her arc with that of her body’s.

Even though, writers like George Elliot, Gustave Flaubert and Leo Tolstoy have shaped the way the polymath writer writes, Gokhale only credits her parents for how life has unfolded for her. “They were extremely liberal. In those days, there was a spirit of reform. We got all the freedom we wanted. At the same time, there was a strong sense of values, we got this as alegacy that has lasted all our lives that we have lived by,” she concludes.