Beaches become a dumping ground during visarjan, but even after so much awareness on eco-friendly ganpatis’ has the condition improved? 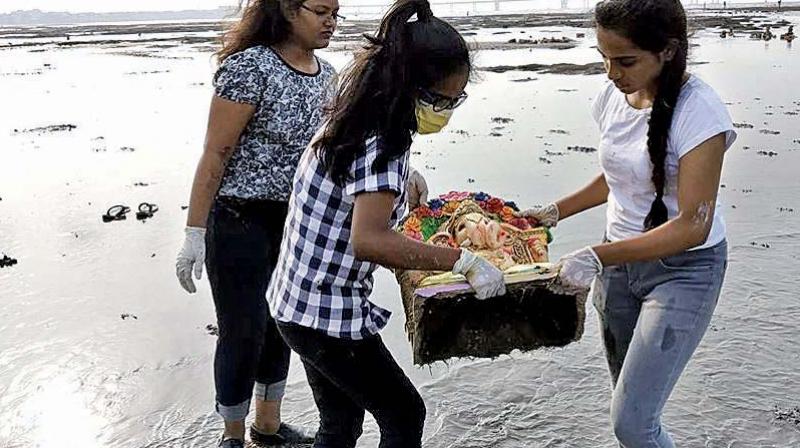 From standing in long queues to get a glimpse of the Lalbaugcha Raja to pandal-hopping and visiting friends and family, Ganesh Chaturthi is arguably one of the most important festivals in the city. But the style of celebration has long been criticised for harming the environment. As more people welcome the elephant God into their homes this year, the number of POP (Plaster of Paris) idols and pooja paraphernalia such as garlands dumped into water bodies, increases proportionally.

To counter this increased pollution during festivals, some good Samaritans in the city are working overtime to make our beaches cleaner. Chinu Kwatra from Beach Warrior is one such citizen who mostly works along the Dadar and Juhu beaches. Chinu is particularly worried about the marine life we’re harming in the name of the festival. “Yesterday on Juhu beach I found a heap of dead fishes and couple of days back I found a dead turtle on Dadar beach. So once the visarjan is done, all these dead species will surface. This happens when the oxygen levels go down in the ocean caused by the POP idols,” says Chinu. 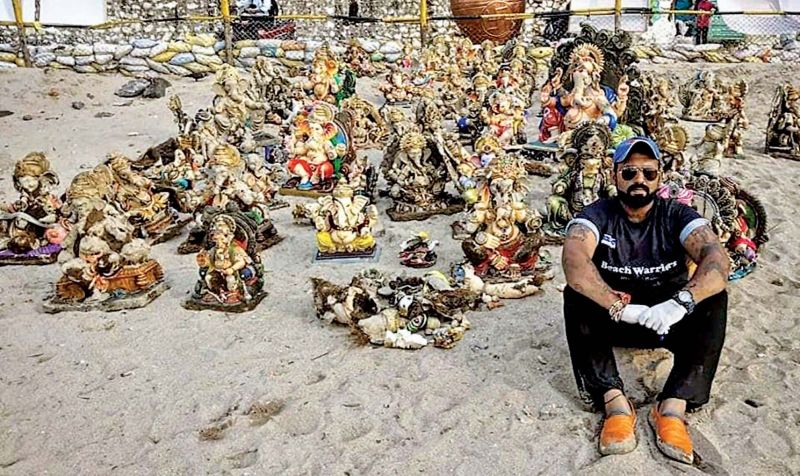 Throughout the festivities, Chinu has managed to pick up approximately 40 to 50 tonnes of garbage from Dadar and Juhu beaches, along with the help of 50 odd volunteers. Though this number is alarming, Chinu is happy that the thermocol ban played its part, “Good sign is, we have not found thermocol even after the seventh day of visarjan,” he adds.

Indranil Sengupta from Mahim Beach Clean up has been working to clean the particular beach since last year. While cleaning the beach after the visarjan, they mostly found garlands and other pooja material as less idols are immersed on Mahim beach. “We mostly cleaned all the flowers we didn’t really get that many idols but we had a lot of garland and things used for rituals. Garlands don’t harm the environment but now there are plastic flower ones, and in some there are plastic balls added in the garland and some are completely made of plastic,” says Indranil who is buckling up to clean the beaches post the last visarjan on Sunday.

The garbage collected from the clean ups is handed over to the BMC, along with the idols that are later processed. The BMC has also set up artificial ponds for immersion, so as to provide an eco-friendly alternative to devotees.

Afroz Shah, whose name is synonymous to beach clean ups, has been working into the wee hours of the night, to clean beaches during the festival. He, along with 100 volunteers, has been cleaning beaches after the virsarjan. But besides the regular clean up, Afroz is now also trying to help people adopt more eco friendly practices, he says, “People have strong faith in lord Ganesh, and so this faith can be tilted to protect the environment. The idea is to tell them to continue with slight changes towards protecting the environment.” He also advises devotees to create metal idols instead of POP ones that can be dipped in water and taken back out, instead of immersing them in the water bodies.

In anticipation of the situation after the 11th day of visarjan on Sunday, Chinu rues, “To be honest, the beach will be in its worst state because this year the number of pandals and the number of people keeping idols has increased.” But he sounds determined to continue his work in the face of it all, he shares, “On Sunday itself my volunteers will be here to guide people, asking them to not throw pooja samagri into the ocean.”