Good day to bus it

Unique features like hydraulic lifts, CCTV cameras, panic buttons, and GPS for tracking of the vehicle are to be introduced. 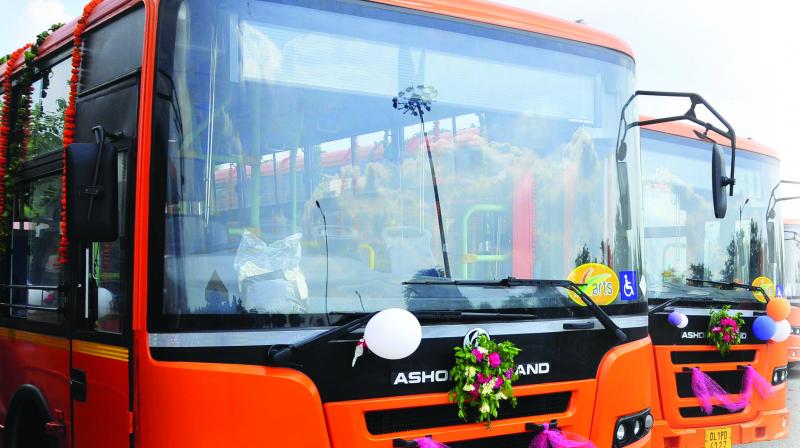 Delhi’s bus network has always been overshadowed by the success of the city’s metro system. However, a new and improved fleet is about to hit the roads.

In what comes as good news for Delhi-based commuters, city buses are about to become safer for the public and more accessible for people with physical disabilities. Many unique features like hydraulic lifts, CCTV cameras, panic buttons with hooters, and GPS for tracking of the vehicle are to be introduced under the ‘Cluster scheme’, which will eventually see 1,000 new buses hit the city roads. Although a great move on paper, what do Delhiites have to say?

City resident Vivek Kumar opines, “Travelling by government buses is never anyone's first preference. We always either use cabs or the metro, but rarely the bus, because of the many disadvantages attached to it. But, this step undertaken by the Chief Minister is an amazing way to help people get rid of biases attached to travelling in buses. It is a step towards the encouragement of using the transport, and is a fruitful investment by the government.” However, Kumar believes that even though the initiative sounds great, the government has to invest in the maintenance of the buses.

Esha, a 23-years-old professional, voices a similar sentiment, as this development might be beneficial for the safety of women too. “This is a step toward inclusion and empowerment. One of the biggest challenges faced by people with disabilities is the struggle for increased and easy access. These new buses seem to promise a safe mode of transport and offer one less barrier to the differently-abled. The CCTV cameras will also discourage pick pocketing and even crimes against women,” she says.

Riya Gupta, a city-based student, lauds the initiative but points out loopholes in the plan. She says, “It sounds like a great step towards development, but it would have been better if this decision was truly thought through. What the government failed to recognise was that in Delhi particularly, the roads and footpaths are not well maintained and, thus, just providing a lift in the bus is not all that a differently-abled person needs.” She states the need for a provision for people with disabilities to exist, which would first help them reach the bus.

“Thus, it just seems like the government forgot to work upon steps one and two, but instantly jumped to step three. So I would say that it isn’t a bad decision, but a decision taken too soon,” she states.

“Elderly people and people with disabilities often injure themselves while commuting in public buses. It just restricts them to staying indoors or one has to end up spending a huge amount of money in app-based cabs. So, the government's decision of introducing facilities like hydraulic lifts to facilitate boarding is a welcome move As a healthcare professional we completely appreciate it and thank the government for thinking about differently-abled and elderly people,” comments Dr Arun Bhanot, a spine specialist and consultant at the Columbia Asia Hospital, Gurugram.