A diving workshop organised by veterans of Special Forces for disabled and abled people. 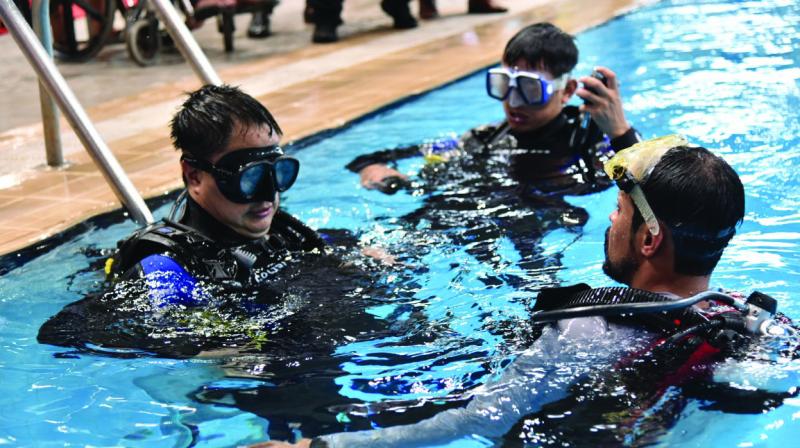 The underwater realm is a thrilling world that human beings often enjoy witnessing. But not everyone has the luxury to dive-deep into the mysterious aquatic universe, owing to either their fears or disabilities.

The underwater realm is a thrilling world that human beings often enjoy witnessing. But not everyone has the luxury to dive-deep into the mysterious aquatic universe, owing to either their fears or disabilities.

In order to make diving and underwater adventure sports more accessible, a workshop called ‘Op-Blue Freedom’, is being organised in the capital. The workshop is a nation-wide adaptive scuba diving programme that offers diving lessons for people with disabilities and the able-bodied alike.

On its first day, nine disabled people dived under the supervision of Special Forces combat veterans. Present at the event were Minister of Sports and Youth Affairs, Kiren Rijiju, and football star Bhaichung Bhutia, who also took part in one session of diving.

This initiative is the first-of-its-kind in Asia. ‘Op-Blue Freedom’ has been initiated by  eight armed forces veterans from the elite special forces of the PARA regiment and MARCO, as a part of their parent project, Special Forces Adventures (SFA).

The team leader of SFA, Maj Vivek Jacob (Veteran), Indian Army, explained the idea behind the initiative by pointing out that “People with disabilities, spinal injuries and people who have lost their limbs in war are restricted by gravity on land; they can only move forward and backward. But when you take them underwater, they can move freely in three dimensions.”