Rain in, veggies out

The price of fruits and vegetables, especially tomato, has witnessed a hike all over the city and it is likely to increase further. 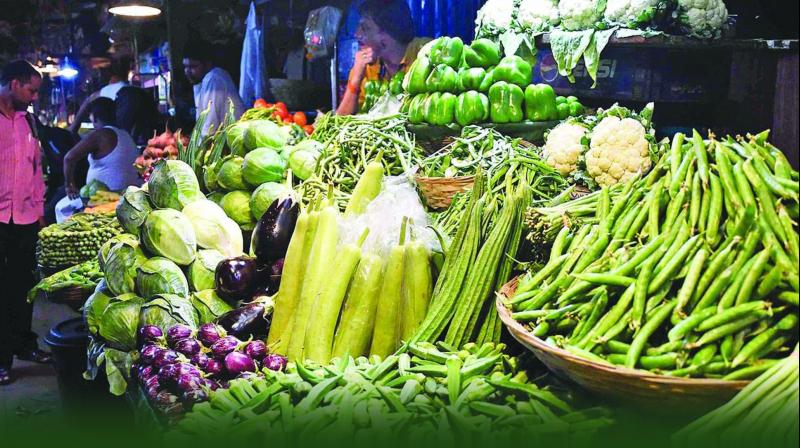 However, vendors are still searching for a solution and asking the government to take action in order to solve this problem

Tomato, which is a staple in almost every Indian household, is likely to get more precious in the coming days. The current price of the fruit has already reached `70-80 per kg in the retail markets of the Capital and things aren't expected to change for at least the next two months.

Mohammed Imran, a wholesaler at the Okhla Wholesale Vegetable market in South Delhi, had many things to comment on this issue. “Due to an increase in the prices of petrol and diesel, we are facing a lot of problems. A Rs 12 commodity is now priced at Rs 20. The transportation cost, which was Rs 5,000, is now up to Rs 12,000. Because of this, we also have had to increase the price of the fruits and vegetables. I have suffered a loss of 50 percent as compared to the previous year. For instance, mango, which was Rs 26, is now being sold at Rs 50-60.”

This is not the first time that the Capital is facing a price hike in staples. Every year the rains cut off supply chains in the city and increase the price of fruits and vegetables as the transportation of these commodities become difficult. The problems that are faced are by the drivers range from poor visibility due to rains to water logging.

However, vendors are still searching for a solution and asking the government to take action in order to solve this problem. Kashif Khan, another vendor, says, “I am not able to find any customers here. The prices are increasing day by day. I think the solution here is that the government should at least play some role for small vendors like us or at least provide subsidies. The Mandi Bazaar (at Okhla) had lost most of its business after demonetisation, and it has really affected small shopkeepers like us. People are no longer supplying us with credit.”

Parvati, a household helper, says, “I have stopped buying tomatoes and onions now as I cannot afford this rate.” To which she adds, “My children tend to nag my cooking and often criticise it due to which they have boycotted my meals.”

Anita Raina, a buyer in the Okhla market says, “ I’m pretty much irritated by this price hike, all though I haven’t cut shot anything in my food supplies, but still what can we do about this? We have to buy them.

Restaurants are also facing problems due to this price hike. Amar, who works in a Noida restaurant, says, “ it is becoming difficult to retain the customers, our whole budget has gone upside down.”undergo an acting course in the US, which she has already applied to. She will also participate in a departmental internship in acting during her stint in America.