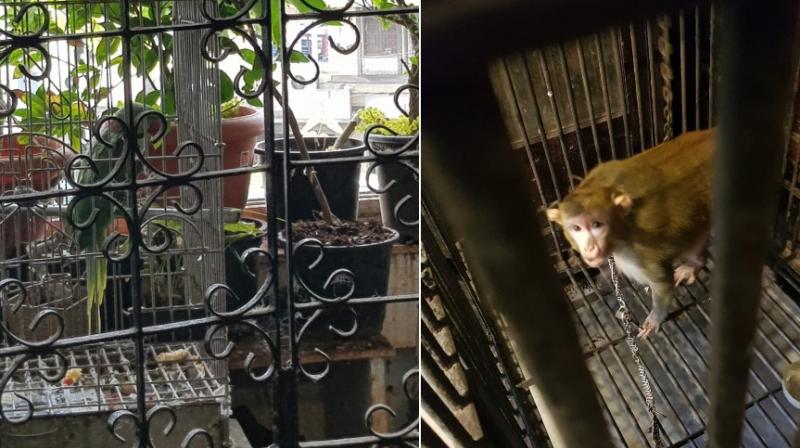 The animals are currently recovering at the Forest Department's facility and will soon be transferred to an animal orphanage in Pune for rehabilitation.

Mumbai: Acting on a tip from a concerned citizen, People for the Ethical treatment of Animals (PETA) India and officials from the Maharashtra Forest Department stormed an apartment in Mumbai on Thursday to rescue a monkey and three parakeets. Both animals are protected species under the Wildlife Protection Act, 1972.

They were being illegally held in an individual's home.

The animals were found to be suffering from serious health issues: The parakeets' wings and tails had all but withered off and the monkey, who was kept chained in a small metal cage, was obese from lack of exercise and unnatural diet. The animals are currently recovering at the Forest Department's facility and will soon be transferred to an animal orphanage in Pune for rehabilitation. The unlawful custodian—an elderly woman in failing health—voluntarily surrendered the animals and, after being warned of the legal consequences of illegally keeping protected wild animals, pledged not to do so in the future.

He further added, “This incident is exactly why laws exist to protect wild animals from being held hostage in someone's home, and it's imperative that humans heed these laws, for everyone's sake.”

Keeping them in captivity, as a pet or otherwise in one's custody, is both morally wrong and punishable by up to 7 years imprisonment and a fine of at least Rs. 10,000.