Besides being a pollution menace, plastic heats up the planet twice as much as aviation industry. 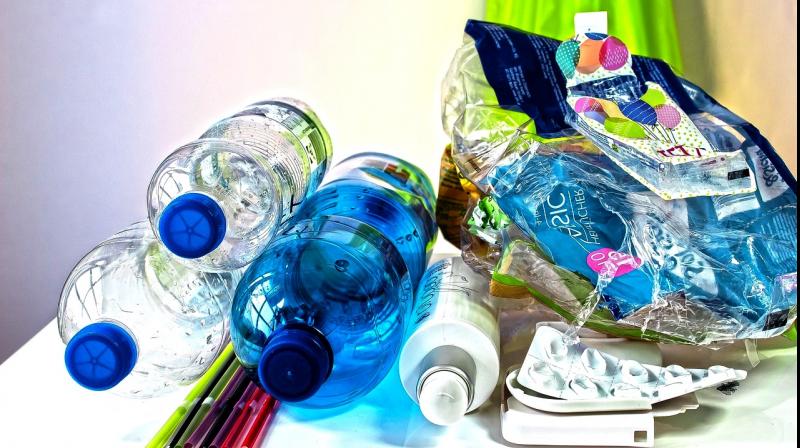 Incineration of plastic waste releases all of the stored carbon in it into the atmosphere, as well as toxic air pollutants such as dioxins, furans, mercury and polychlorinated biphenyls. (Photo: Representation/Pixabay)

We’re all too aware of the consequences of plastics in the oceans and on land. However, beyond the visible pollution of our once pristine habitats, plastics are having a grave impact on the climate too. Newly published research calculates that across their lifecycle, plastics account for 3.8 per cent of global greenhouse gas emissions. That’s almost double the emissions of the aviation sector.

If it were a country, the ‘Plastic Kingdom’ would be the fifth-highest emitter in the world. Demand is set to rise, too. At 380m tonnes a year, we produce 190 times more plastic than we did in 1950. If the demand for plastic continues to grow at its current rate of 4 per cent a year, emissions from plastic production will reach 15 per cent of global emissions by 2050.

Carbon footprint of the plastic lifecycle

More than 99 per cent of plastics are manufactured from petrochemicals, most commonly from petroleum and natural gas. These raw materials are refined to form ethylene, propylene, butene and other basic plastic building blocks, before being transported to manufacturers.

The production and transport of these resins requires an awful lot of energy and therefore fuel. Greenhouse gas emissions also occur during the refining process itself – the “cracking” of larger hydrocarbons from petrochemicals into smaller ones suitable for making plastic releases carbon dioxide and methane. According to the study, about 61 per cent of total plastic greenhouse gas emissions comes from the resin production and transport stage.

A further 30 per cent is emitted at the product manufacturing stage. The vast majority of these emissions come from the energy required to power the plants that turn raw plastic materials into the bottles, bin bags and bicycle helmets we use today. The remainder occurs as a result of chemical and manufacturing processes – for example, the production of plastic foams uses HFCs, particularly potent greenhouse gases.

The remaining carbon footprint occurs when plastics are thrown away. Incineration releases all of the stored carbon in the plastic into the atmosphere, as well as air pollutants such as dioxins, furans, mercury and polychlorinated biphenyls, which are toxic and damaging to human health.

As plastics take centuries to degrade, disposal in landfill makes only a small contribution to emissions in theory. However, as much as 40 per cent of landfill waste is burnt in open skies, dramatically speeding up the release of otherwise locked-up carbon.

If we are to combat climate breakdown, reductions in plastic emissions are clearly needed. Thankfully, the solution with the biggest potential is already in motion, albeit slow. In showing that transitioning to a zero carbon energy system has the potential to reduce emissions from plastic by 51 per cent, the study provides yet another reason to rapidly phase out fossil fuels.

However, beyond urgently required global decarbonisation, we need to reduce our seemingly insatiable demand for carbon-based plastic. Increasing recycling rates is one simple way of doing this. The highest-quality plastics can be recycled many times and nearly all plastic can be recycled to some extent but only 18 per cent was actually recycled worldwide in 2015.

Although each recycle process requires a small amount of new plastic, we can greatly increase the life cycle of the material by efficiently reusing what we make. A more fundamental solution is to switch to making plastics from biodegradable sources such as wood, corn starch and sugar cane. The materials themselves are carbon neutral, although renewable power is essential to eliminate the climate impact of energy costs during production, transport and waste processing.

However, a massive ramping up in the production of bioplastics, which currently make up less than 1 per cent of the total plastic production, would require vast swathes of agricultural land. With the population set to rise dramatically, increasingly coveted arable space may not be able to satisfy demand.

The bottom line, therefore, is that we will need to reduce our demand for plastic. According to the study, simply reducing the annual growth in plastics demand from 4 per cent to 2 per cent could result in 60 per cent lower emissions from the sector in 2050. While a life without plastics may seem unimaginable, it is worth remembering that their prevalence is a relativity recent phenomenon.

The first artificial plastic, Bakelite, was developed in 1907, but it wasn’t until the 1950s that the age of plastic began. If we show a genuine appetite to address plastic pollution, the world could change again just as quickly. Governments, corporations, and individuals must make research into alternatives a priority and support alternatives to needless plastic waste.