Week after week, Mumbaikar Afroz Shah has been religiously leading the mission to make the ocean plastic-free. 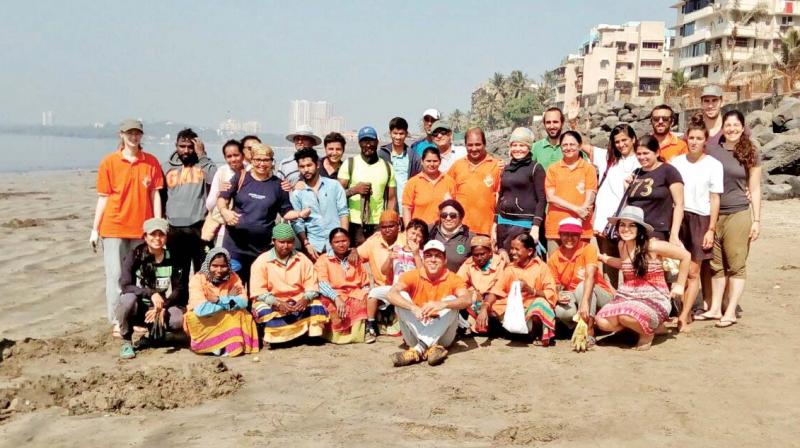 If you were to spend a moment thinking about Mumbai’s beaches, it is highly possible that images litter piles dotting the shore will come to your mind. So, when 33-year-old lawyer Afroz Shah took to Twitter to share a photo of the Versova beach that he cleaned up with his team of volunteers, it created a buzz on social media, and even support from Bollywood celebrities. In fact, Academy winner Leonardo DiCaprio, known for his dedication to save the planet, even shared a video of Afroz’s campaign on Instagram.

So far, Afroz and his team have managed to clean  a whopping 5.3 million kg of trash from the beach. But Afroz will let you know that it took 85 weeks to get the 2.5 km stretch to look spotless.

It was in October 2015 that lawyer Afroz Shah decided to manually clean the Versova beach. “It was difficult to take a walk on the beach since you would be stepping onto plastic, and not the sand,” complains Afroz. Frustrated by the amount of garbage, the lawyer teamed up with his 84-year-old neighbour, the late Harbansh Mathur, who shared his enthusiasm for a clean beach.

“I decided that I should do something. Of course, I could file a public interest litigation (PIL) at the Bombay High Court and invite the court to pass orders, or I could complain to local municipal authorities about the issue. But I realised I wanted to be a part of the solution by taking matters into my own hands.”

He adds, “We see wallpaper-worthy images of pristine beaches abroad, but now it is time that we have a few in our city. And that starts with each one of us working at the ground level.”

Afroz and Harbansh religiously set out on Sundays to clear plastic bags, cement sacks, glass bottles, pieces of clothing, and shoes. About 50,000 kg trash was removed during the first clean up.

“A lot of people even asked why I was bothering to clean it up, since it is going to be as dirty the next day, or they would comment saying that it is impossible to clean this up,” says Afroz, about his campaign. The local municipal authorities too came forward when Afroz approached them for help. “They are ready to help you — all it needs is a nudge from your side. The BMC supplied the machinery and even workers to take care of the garbage from the sea,” he states.

As weeks went by, local residents seemed keen on participating in the initiative. He visited schools, colleges, and broadcast the upcoming clean ups on Facebook. A few Bollywood celebrities too chipped in. “Pooja Bhatt, Subhash Ghai and Pooja Bedi too stepped forward and got their hands just as dirty,” he reveals.

Afroz now spends three to four hours a day during the weekends beautifying the beach. He is also happy that the exercise to beauty the beach has also turned into a chance to bond with locals. “In a way, I see citizens coming together and building a bond amongst themselves, and nature,” he states.

The lawyer is in no mood to hurry and replicate this clean-up crusade across the city’s beaches any time soon. He has his reasons. “Mumbai has 19 beaches but I want to take over every project one at a time. There is no point taking over projects, and then doing a shoddy job of it,” he concludes.