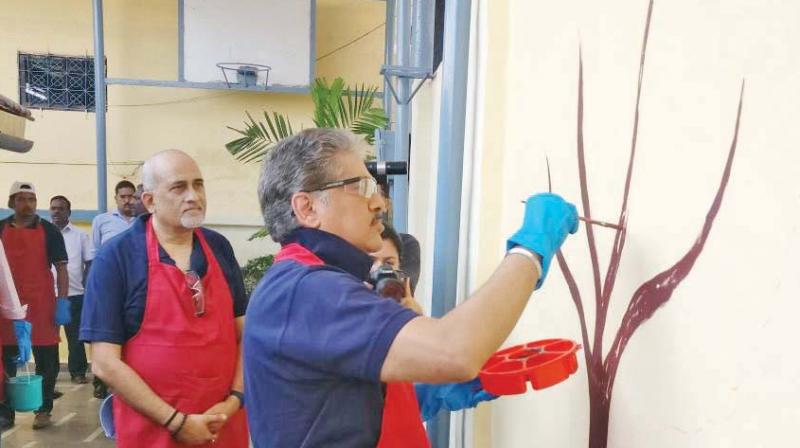 Mahindra Group chairman Anand Mahindra had made a wish in January. And it was fulfilled on Saturday afternoon at the Gandhi Memorial School in Dharavi, where he painted a wall along with schoolchildren. Mahindra produced a tree trunk with leaves and a ‘communal harmony’ mural with the students. A proud Mahindra later showed off his handiwork on social media.

“CHF Foundation arranged for me to go out to Matunga Camp in Dharavi and help paint murals at the Gandhi Memorial School. I enjoyed my share of art classes in college and this was so much fun after ages. Can’t think of a better way of spending a Saturday morning, Mahindra posted on his account on Saturday evening.

An elated S.J.S. Chelladurai, principal of the school said, “We were all excited to receive Mr Mahindra at the school. His visit changed the look and atmosphere here. The students, in particular, enjoyed his company. Mr Mahindra’s communication style impressed the students.” 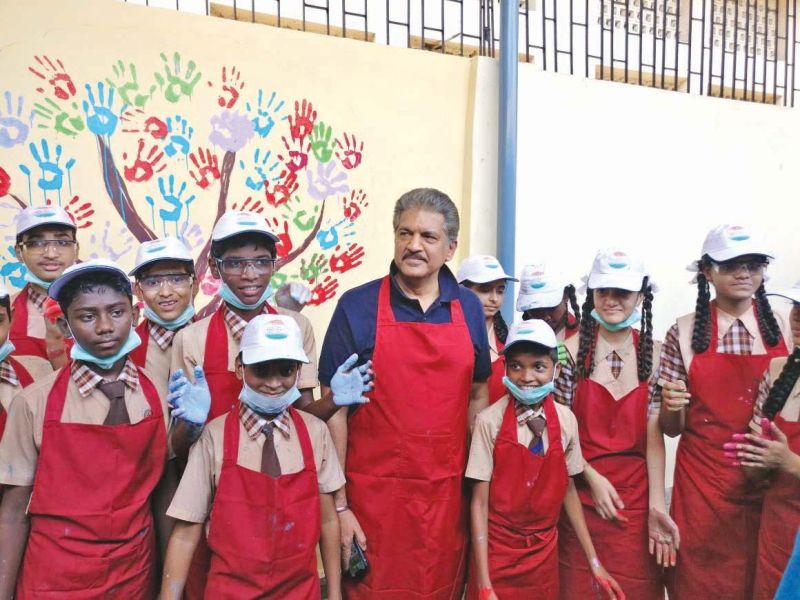 According to Chelladurai, the initiative to paint a wall at the school was taken by the Mahindra Group. The proposal was sent to the Gandhi Memorial School to collaborate for the activity under the group’s CSR (corporate social responsibility) activity. “We were approached in the last week of March and, after verifying audit reports and documents, we collaborated with them,” the principal confirmed.

The visit was kept a secret from the children. “We were aware of the Mahindra chairman’s visit but the students were not. So, they were surprised and happy to meet and paint with him,” Chelladurai said.

The inspiration behind Mahindra’s activity came from a ‘slum transformation through colours’ initiative taken by the ‘Chal Rang De’ team. After watching a video of the complete transformation of a slum at Ghakopar by the team, the tycoon, in January, took to Twitter to announce his interest in drawing on walls.

Various organisations sent out invitations, but he chose to volunteer with the CHF Foundation’s initiative with Gandhi Memorial School.

This is not the first time that the businessman has been active in the community. Recently, the chairman had shown interest in acquiring fugitive diamantaire Nirav Modi’s seized property Rhythm House, once an iconic music store in south Mumbai, and restoring it to its former glory.

Mahindra also expressed his ire over the recent Kathua and Unnao rape cases, saying he would volunteer to execute rapists and murderers of young girls in the country.