‘We are here to reclaim the streets’ 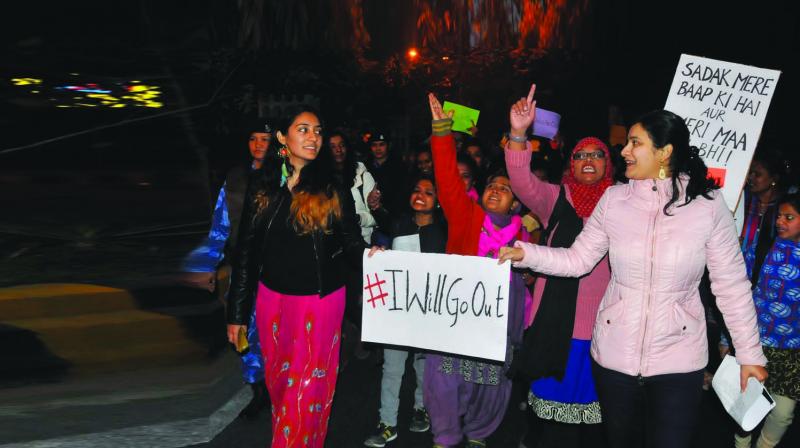 Over 100 city women participated in a solidarity rally in the wake of Bengaluru mass molestation incident, asking fellow women to occupy public spaces and seek azaadi from patriarchy on Saturday. In the capital, the rally commenced from Barakhamba and ended at Jantar Mantar, and the participants were seen shouting slogans like ‘Halla Bol’, ‘Yeh Shehar Hamara Hai’, ‘Yeh Sadakein Hamari Hain’ and recited Dushyant Kumar’s ‘Yeh Aag Jalni Chahiye’ poem. Similar rallies took place in around 30 different cities in the country.

Swarnima Bhattacharya, a researcher with Women’s Feature Service, said, “It was a collective call and the participation was overwhelming. We had just a few weeks to organise everything and promote it on social media. We will soon present a national manifesto to the President of India regarding our demands. Interestingly, there were many female cops, who were escorting us, and they were gesticulating and boosting our morale. Though a one-off thing, the march helped us leave a formidable footprint, both in the ‘real and digital’ spaces.”

Even as over 100 women chanted the slogan ‘No means no’ recently highlighted by the movie Pink, some of the women didn’t rate the film, which talked about women’s rights, very highly. “I found the fact that a man had to interfer and stand up to save three girls, quite unsettling. Why can’t we save ourselves? We are very much capable of fighting our own battles,” said Aashi Pandey, a sophomore at the IP College for Women, who was participating in the #IWillGoOut solidarity march. She added, “Women have come out to ask for their rights (through this rally) but if you see closely, here also there are quite a few men who are shouting the slogans louder than us. I understand that they are with us in this fight but why do they need to shout more than us and show us that we need them?” She continued, “Young girls are being molested by their own people at their own homes even before they become aware that they were being molested. I have gone through a similar ordeal. But this march shows that if there were more women around, women would feel much safer. It shows the importance of being a collective. So, we are today asking for azaadi — from patriarchy where the baaps, bhais and patis tell us what to do.”

Echoing similar sentiment, Devika, a final-year student at St. Stephen’s College who sounded livid with the patriarchal structure, called the march — “a slap on these structures and status-quo.” She added, “We are here to claim the night, as the night has never been ours. From Delta Meghwal to Nirbhaya, our society has always blamed the victims for the crime. DU, the so-called best undergraduate university in the country teaches you great lessons about feminism in the classrooms but in practicality, puts curfew time in hostels for girls to tell you that if you get raped, it’s ‘your’ fault, while there are no rules for the boys. Isn’t it a structured legitimised discrimination? In the corporate sector also, you will only find 500 women among 20,000 men, and the reason would be that women can’t be given field jobs. And these are apparently so-called liberal workplaces.”

Nastasia Paul-Gera, coordinator at Sangat — A Feminist Network, said, “When I am leered at and groped in the metro, I am told that the guys did a wrong thing but I had no business being out so late. Harassment is not city-specific and women need to rise not as victims but as survivors.”

At the venue, several speakers took turns to reiterate the point that women must come forward to help other women, occupy the public space in large numbers and bring an end to their objectification. The march was organised by several organisation working for gender parity. “Though it is in solidarity with women who were molested in Bengaluru, the whole issue is nothing new. We are here as individuals to raise our voices, to seek our right to move without fear, in every gali and nukkad,” said Krati Sharma, who works with Jagori.

In Gurgaon, a similar rally was conducted near DT City Centre. Smriti Chhabra, founder, Gurgaon Community Circle, said, “Gurgaon itself has witnessed many cases in recent times when women have been molested and abducted in daylight from prime locations. We felt that our city needed a wake-up call once again.”