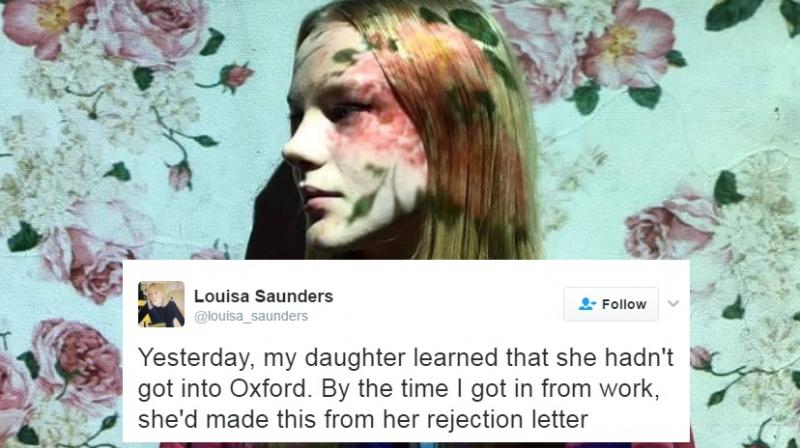 The rejection letter art was tweeted by her mother talking about it and it has gone viral with over 62,000 retweets. (Photo: Facebook)

Students receive letters of rejection very often in their lives from reputed universities and while some of them get depressed there are many that take it quite sportingly. Recently, a teenager decided that a rejection letter from Oxford was not all that bad and so she converted it into a piece of abstract art.

According to a recent media report, 18-year-old Claudia Vulliamy had applied to study at Oxford University but had been rejected. She got to know through the rejection letter they sent to her house. However, Claudia decided that it wasn’t all that bad and converted it into a piece of art that was amazing.

The teenager had applied to study Classics at Wadham College but hadn’t got through. After completing it, she showed it to her mother Louisa Saunders later that day who went on to tweet it out and the tweet has now gone viral with over 50,000 retweets and more than a lakh likes too.

Vuillamy's art is not the first of its kind; painting is also one of her hobbies and she has many followers on Instagram that speak volumes. Check out the art below:

Yesterday, my daughter learned that she hadn't got into Oxford. By the time I got in from work, she'd made this from her rejection letter pic.twitter.com/KCInrTA1OO