Meeting the queen of carnivals

Meeting Adela Chu was like a dream come true, because I had only read about her in the books of the carnivals. 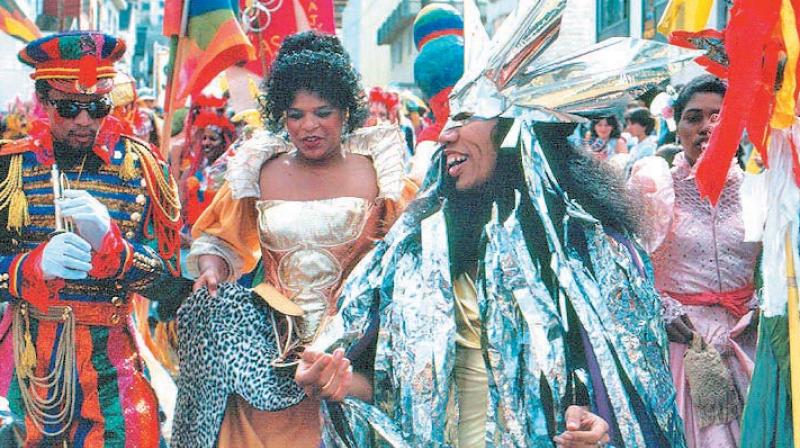 For a Latin American dance lover the high point in life is to dance at a carnival. There are two most famous carnivals in the world — Rio de Janeiro and the San Francisco carnivals.

My recent trip to United States of America was a hectic one and to relax and chill for a week in between my assignment I took a trip to Hawaii all thanks to my dear friend the world renowned Dr Daniel Susott, who owns one of the most beautiful tree houses in Oahu Island in Hawaii.

One day Dr Susott pushed me to get out of the Hammock and dragged me to an evening of music and dance where he was singing at a Latino bar.

Meeting Adela Chu was the best part about my trip, she has such a magnetic personality that each person at the bar could not take their eyes off her when she entered. With a broad smile on her face she greeted one and all and when she met me she hugged me tight and said ‘Man from Gandhi’s land’ For me, meeting Adela Chu was like a dream come true, because I had only read about her in the books of the carnivals, seen her pictures flashed all over the news for being the mother of San Francisco carnival.

Apart from being the Queen of the Carnival, Adela Chu is a legendary name in the field of world dance, she has mastered and studied modern ballet, flamenco, samba, Caribbean, jazz, Balinese, hula as well as yoga, Tai Chi and Capoeira. She is most famous for her eclectic choreographies that integrate jazz, Afro-Caribbean and Latin movements.

I wanted to dance with her but could not muster the courage to do so. But when she came and sat down beside me, and smiled my nervousness all disappeared and I took the opportunity to ask her a few questions.

What made you start the San Francisco carnival?
I come from Panama, where dance is our life, but when I moved to San Francisco to teach dance to college students, life was boring. I told the management and my 300 odd students that I needed some spice, some motivation to be in San Francisco or I would leave. That is when I suggested the idea of a Carnival where all students would dance and celebrate life. That is how it all began in 1979.

How did the small 300 odd Carnival turn into an iconic carnival?
We were 300 dancers on the float attracting about 500 people circling the famous Precita Park in San Francisco, playing drums, dancing in elaborate costumes and in general having fun, one could feel the energy of something that was happening at the right place and the right time. We had no permits, no police and I had no idea that over 3 decades later the seed that I was planting would grow into a multi-faceted multi cultural event that is now televised and attracts millions form world over.

Organising a carnival would have been difficult for you alone?
I was not alone. I had the support of a few dear friends whose names I would like to bring forward. At the college I had huge classes in those days up to 95 in some classes with 15 or more musicians. I split them and created different choreographies for each group. The entire Mission joined me in the affair with Marcus Gordon organising the musicians and Margaret de Jesus bringing her Money comparsa. The lineup included Jose Flores with his Dandis, Jon Calaway, Johnny Santos, Bobby Cespedes, Tobaje, Rudy  Ortiz, to name a few of the Mission youth, destined to become luminaries and legends in their own right. There was the Rainbow Comparsa, which Pam Minor lovingly clothed artistically with every colour of the rainbow. This act lead to the creation of the Costume Bank of the carnival later on where Pam Minor worked for many years. Our theme of the Carnival was the Americas, and I had written a song called Samba Dorado which began with the words “Golden dream of Spaniards lust, ah Brave New World”  co-authored with Claudio Amaral of Viva Brazil.

A carnival needs lots of promotion and preparation; how did you manage that?
I hired other dance teachers.  I myself was into Afro Caribbean Jazz and aft me came in Blanche Brown. Other sources of great inspiration were poet Elaine Cohen, my constant friend and co-conspirator; Sir Lawrence, “Sir” who built an outrageous costume and paced the carnival; and many of my fellow dancers, including Benito Santiago, who for years participated in many ways in keeping the carnival alive. Of course, the beautiful visuals of Nancy Hom, who created the carnival posters of the first few years did much to give this carnival a distinctive flavour. I had already foreseen the next step, which was to set up a Carnival Committee.

Carol Wiley volunteered to be our overall coordinator, Marcus, myself , “Sir” and Pam all agreed to put our 2 cents in. We were later joined down the line by John Santos and a few years later by Marta Estrella.

Organising can be stressful and after having health problems with my spleen my doctor advised me to give it up, so I reluctantly left the committee knowing it was in good hands.

So was this your first Carnival as an organiser?
Actually, the San Francisco Carnival, which is what I named my baby, was not my first.  I tried to do one on 24th and Mission as part of Ana Halprin’s City Dance in 1975. I was one of the performers in her group at the time and had taken on the task of creating a dance experience for the 24th St Bart Station. My vision was, of course, Carnival!  What else would you see at the 24th St. Station? A bunch of bums hanging out asking for spare change? But I was disappointed at how little time we stopped there with City Dance. I had prepared a whole elaborate ritual and was only able to show five minutes of it.

In 1976, I created a carnival at the Masonic Temple for Esalen in which 100 people participated. They wanted to make a weekly experience of it but decided instead to go to Brazil. I was gone a year and saw two carnivals—one in Rio and one in Bahia.

They were fabulous but very different to the ones in my home town in Colon, where carnival was a street party and everyone participated. The year I came back from Brazil there was no Carnival in San Francisco. That is when I conceived the San

What is your message to all those who worship you as the Queen of Carnivals and who come from far and wide to be a part of the celebration?
I cant believe it’s been over 35 years since the carnival in Precita Park. The carnival in San Francisco is still going strong, thanks to all of you for helping to keep my baby alive! I have wonderful photographs of those first three years. The carnival has been a source of living, breathing inspiration to countless artistes in a community hungry for expression of their prolific talent and in need of a forum where cultural ideas can be exchanged with the Caribbean, Brazil and wherever there is a carnival. All I want to say is ‘Thank you for Honouring me and keeping my baby alive”.

The Queen, last graced her own Carnival Grand Parade for the 20th Anniversary, where she led her Samba and Tahitian dance contingent ‘Return to Paradise’ down the streets of the Mission, to great acclaim.

Adela Chu is one happy-go-lucky lady. Each year since 1979, the San Franciso Carnival has emerged like a beautiful butterfly from its cocoon, more stunning and diverse from the year before.

Before I hugged her and said good bye I told her “Ma’am you must have been born under a lucky star, as not everyone gets to realise their dreams!” to which she replied to me with her broad ear to ear smile ‘Give a kiss on the cheek you care for, give a damn for the dreams you’d dare for... Why should we limit our lives, can’t we make this a Paradise?

— Sandip Soparrkar is a ballroom dancer and choreographer who has been honoured with National Achievement and National Excellence Award by the Government of India. He can be contacted on. sandipsoparrkar06@gmail.com