But cut to a few years later and find that history is not the only thing that has undergone a rewrite. 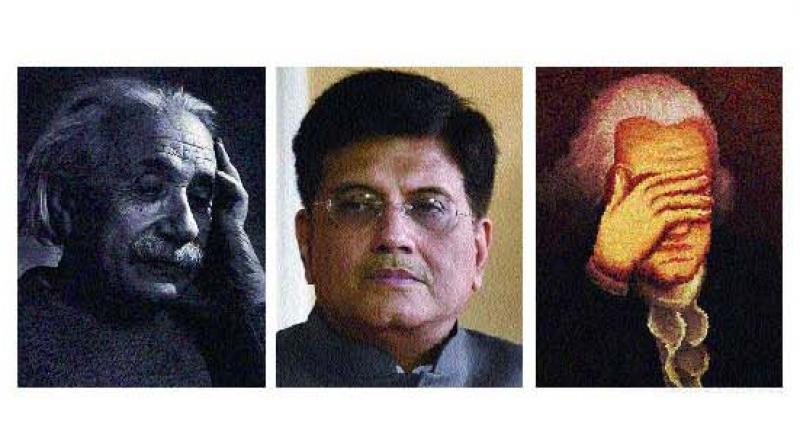 When India won the 1983 Cricket World Cup, it was beyond imagination that Kapil Dev’s men would thrash a West Indies side that included Clive Lloyd and Sir Vivian Richards. People at that time said, “History has been rewritten.” But cut to a few years later and find that history is not the only thing that has undergone a rewrite.

Very recently, Minister of Railways Piyush Goyal had a “slip of the tongue” where he credited Einstein for discovering gravity. This sent shockwaves across the universe and, of course, there were memes galore. However, this isn’t the first time a wrong scientific or general-knowledge fact has been uttered in public discourse by a politician. In fact, jump a few days ahead and find that Sambit Patra, a BJP spokesperson, said that the country was on its way to becoming a $5 trillion economy, but kept on averting the question when asked how many zeros exist in a trillion. He may have known the answer, but the ‘or he may not have known’ part has made his the butt of jokes on Twitter ever since.

Of course, unless we’ve been lied to all our lives, many of us know who really discovered gravity. But still, not every millennial or Gen-Zer is well-informed, and misinformation coming from respectable public figures who are supposed to be intellectual role models and leaders, can be easily believed. In fact, this can turn quite dangerous, as the politician can proclaim anything as a fact.

It also dilutes the respect we have for our leaders, especially for those at an impressionable age. For instance, 21-year-old Oliver Kumar feels “absolutely disgusted”. He adds, “It is really dangerous for our country because this will make us feel ashamed in front of international media.” Sanjana Parashar, a millennial, continues, “We actually believe in what they say and often rely on them. After all, we vote for these people because we listen to them and believe in their agendas. And if these individuals are not updated, then on whom will we rely?”

Prachi Vashisht, another 21-year-old, is of the opinion that the task of being a politician who represents the nation's ruling party, comes with a lot of responsibility. She then adds, “With that respect, politicians really need to get their basics right. They represent the nation and mistakes like this cannot be ignored.”

Chhavi Bakaria is an academician, and she adds another salient point: “Indian voters rarely look at their educational background before selecting a candidate.” Hence, she continues, “No wonder that is least on the priority list of people in power. Issues like religion or caste matter more to them. If that’s not enough, lineage is the next criteria for selection a candidate. Thus, it comes as no surprise that when you hear such things.”

Whether it was a ‘slip of tongue’ or a ‘lapse in memory’ is something only the leader can tell. Sanjana, however, also gives the politicians the benefit of doubt and continues, “At times you just get confused between names but you know the gist of the story. So, it's not a big deal if you miss something. It’s human nature.” she continues, “We can't criticise them for everything.”

It is for certain that there are 12 zeros that make a trillion and it is Newton who is responsible for the discovery of gravity. Otherwise, the sun still rises from the east and sets in the west. Unless, of course, something drastic happens. Stay tuned!