In fact, these hilarious pictorials are even making it to the infamous ‘family’ WhatsApp groups. 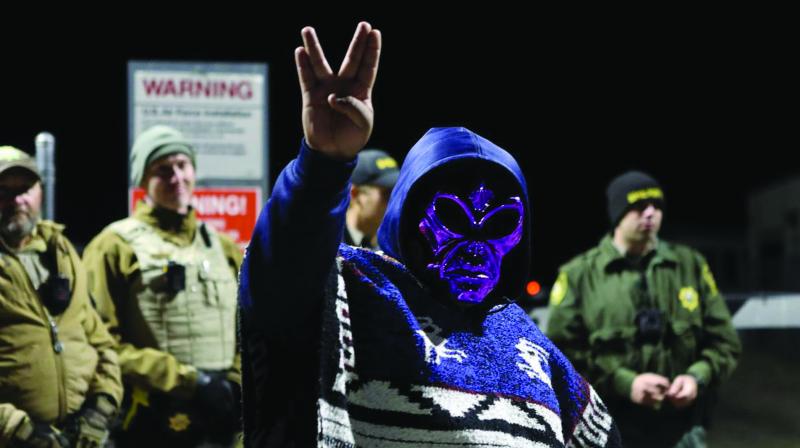 The online phenomenon has reached new heights, as people actually turned up at Area 51, and this shows that they may be taking the Internet too seriously.

The Internet age is well at its crescendo, and people having been sharing memes online for entertainment purposes. In fact, these hilarious pictorials are even making it to the infamous ‘family’ WhatsApp groups.

But aren’t we taking them a bit too seriously now? For instance, on September 20, around 75 to 100 people actually reached the gates of the United States Air Force facility called Area 51, at 3 in the morning. Don’t know what we’re talking about? This goes back to the “Storm Area 51: They Can’t Stop All Of Us,” Facebook event page from last month, when more than a million alien enthusiasts (courtesy the Area 51 conspiracy theories) showed interest in attending the supposedly ‘joke’ event, slated to be taking place on — you guessed it — September 20 at 3am.

Radhika Malik, an avid Internet user, believes that memes are fun to share and laugh about, but “When I saw the Area 51 trend actually go viral, I wasn’t expecting even 10 people to show up. The Internet can be so powerful that it can actually influence people. However, there are many memes that are based on ongoing situations but have no facts and figures. We still tend to believe them all.”

Student Ayush Jain thinks that social networking sites such as Twitter and Facebook are running on memes now, which have become such an integral part of our daily lives, and says, “I can’t even imagine not sharing them with my friends. It’s very usual for me to look at a meme and instantly relate to it, or with a friend of mine.” But despite them being harmless jokes, Ayush has to keep in mind that he doesn’t hurt the sentiments of people with whom he is sharing the meme. He continues, “We have all been in positions where we have hurt the sentiments of others, as what is harmless and funny for me might be offensive for someone else.”

Shashank Singh concludes by saying, “In today's time when there is so much pressure and competition, I do not understand how do people find so much free time to share things as stupid and pointless as memes. Fine, they're fun and everything but still. Why must they be taken so seriously?"  Singh adds, "It wasn't a surprise to me that so many people stormed Area 51 to find aliens for a joke, they all just wasted their time.”