Why invoke name of god?

The Kerala floods are just another reminder of the fragility of the human condition. 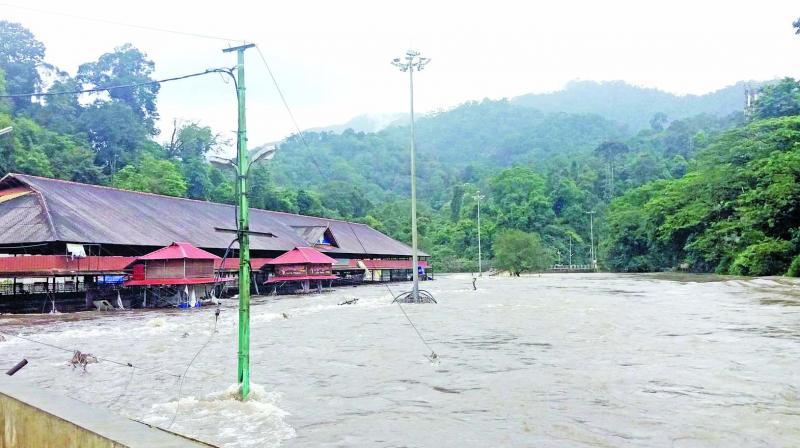 Twitterati were distinctly unimpressed with the thinking of some people that allowed them to mix up the issue of menstruating women’s entry into the Sabarimala temple with the unprecedented Kerala floods causing untold misery to the people. There was anger in reactions to the tweets trying to find a link between wrath of god and a natural calamity the likes of which hasn’t been seen in ‘God’s Own Country’ for close to 100 years now.
Among those who tweeted linking angry gods and floods as retribution was S. Gurumurthy, the Chennai chartered accountant appointed recently to Reserve Bank as a part-time director and linked to the Sangh Parivar via the Swadeshi Jagran Manch. “Supreme court judges may like to see if there is any connection between the case and what is happening in Sabarimala. Even if there is one in a million chance of a link people would not like the case decided against Ayyappan,” he tweeted.

An immediate response came from lawyer Indira Jaising asking whether his saying so goes against a scientific temperament. “Fundamental duties Ar 51A (h) - duty to develop a scientific temper. Your’e  inciting people of Kerala who have lost loved ones to revolt in the name of religion & threatening SC. Withdraw your tweet immediately and read up on climate change.”

“Don’t link this with any religious issue. Not in good taste. Didn’t expect this one from you. Helping the stranded people is the need of the hour. If you can help in some way, do it please,” pleaded Manikandan. One tweet slammed Gurumurthy for talking like a “Bharathiraja movie villager,” an apt analogy.

“Why invoke the name of god in all this? Which god would test human beings with such calamities like tsunamis, hurricanes, tryphoons, floods and droughts? We have always believed that while the gods we pray to in any religion are benevolent, the forces of Nature are far bigger than us and we do not go round blaming the gods for this.  The floods are just another reminder of the fragility of the human condition,” says R. Ramanathan who teaches philosophy. 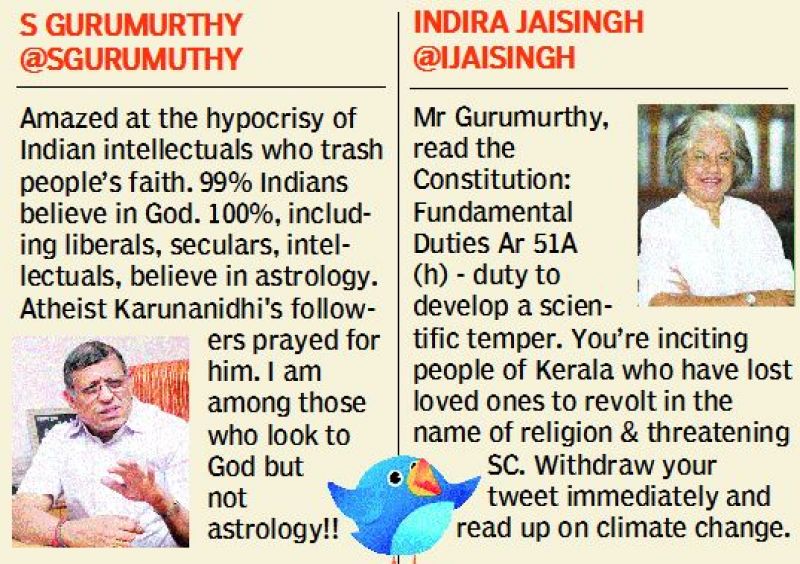 “It’s simply nonsense. This practice of not allowing women to worship at Sabarimala temple has been a custom for long years in what continues to be a highly patriarchal society. Kerala is not a matriarchal society, rather it is a matrilinear society which is controlled by the uncle of the theravaad (household). No god would punish his creatures in this fashion to call floods revenge,” says a professor of philosophy from Kerala who, however, did not wish to be named.

Not everyone was inclined though to go up against the faithful. Quite a few seemed to agree that Lord Ayyappa was angry and was punishing Kerala for letting outsiders to meddle in its affairs. Twitterati were also questioning their motives even as Gurumurthy was trying to defend himself by saying he had great faith in God but did not believe in astrology and that people should not discredit those with faith.

The crass logic by which events affecting people are ascribed to gods by the superstitious came in for some hard knocks from people DC spoke to. There was a time when the head of the Kanchi Mutt was implicated in a murder case and some people were silly enough to suggest that the 2004 tsunami, triggered by an earthquake in Indonesia, was retribution for the arrest of the head of a religious mutt.

There was even a silly claim that the rain was restricted to Kerala and there was none in TN or Karnataka, as if to justify this invoking of the name of Lord Ayyappa. Does he need a reminder that both Karnataka and Tamil Nadu are floored by the same monsoon rain with the Cauvery river system flooded all along its course?

Ecologists are blaming man for the impact of the floods being so bad. Madhav Gadgil, who once wrote a long report warning of such ecological disaster in the Western Ghats and Kerala, believes it is the profit-driven activities of man that has made the floods seem like a deluge sinking everything.

The wrath of the gods descending on earth as retribution is an ancient line that the heads of religions used to subjugate people, according to leading atheist Richard Dawkins. The history of man is filled with the fear raised by those wishing to retain their power over commoners.

In the case of Sabarimala also, there are misleading pictures of a submerged temple which some are trying to pass off as the abode of Lord Ayyappa. This is not so.

The area around Sabarimala temple is dry and the temple is open and rituals are going on although people have been unable to access the temple because of the flooding at Pampa. Pictures of Pampa are being passed off as Sabarimala flooding and no one should be fooled by this.