The winds of change

A dissection of the movement that sought to inspire people through writings advocating equality and attacking social injustice. 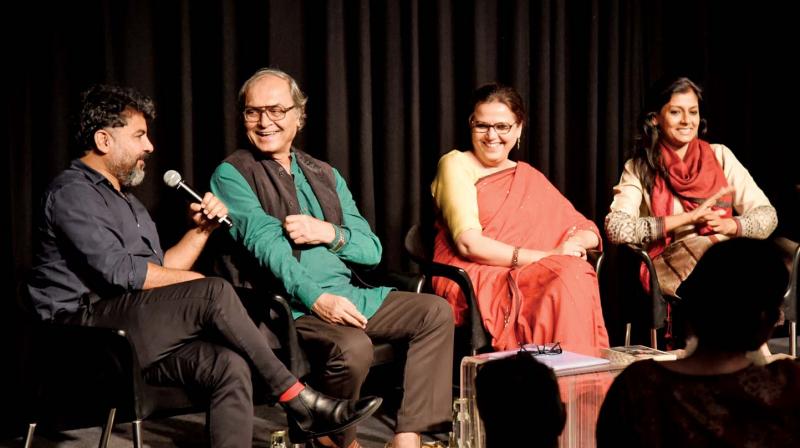 “If you are a human being, you ought to be progressive,” believed writer Saadat Hasan Manto. But what does it mean to be progressive in this day and age? The idea of rebelling against injustices is just as relevant today as it was nearly a century ago.

At an event organised by the G5 Foundation for Contemporary Culture, Nandita Das, Danish Hussain, Rakhshanda Jalil and Javed Anand discuss The Progressive Writers’ Movement in Bombay, a liberal city that was once a magnet for free-thinking writers, poets, filmmakers, and artists.

The birth of The Progressive Writers’ Movement
What started off as a group of anti-imperialistic writers seeking to inspire people to attack social injustices and seek equality, was formally launched as The Progressive Writers’ Movement in 1936 in Lucknow. A first-of-its-kind conference brought together literary stalwarts such as Rabindranath Tagore, Sarojini Naidu, Munshi Premchand, and Maulvi Abdul Haq.

But writer Rakhshanda Jalil points out, “It’s wrong to say that progressivism started in 1936, it started long before that.” Quoting revolutionary writer Ismat Chughtai, she adds “Progressivism starts when humans raise their voice against injustice for the first time.”

She believes that the movement originated in the year 1857. “There was a burst of political energy that came with the call for the first war of independence,” she says.

Meanwhile, Danish Hussain is of a different opinion. “The origin of the movement can also be dated back to the time when Sajjad Zaheer, Ahmed Ali, Rashid Jahan and Mahmuduz Zafar came out with the book Angaaray - a collection of short stories that changed the rules of Urdu literature. It was the first book to be banned by the government of India in an attempt to appease the Muslims whose sentiments were hurt by it,” he says.

Bombay - the foundation
Though the origin of the idea of progressivism may be debatable, it is believed that the movement first saw light in Bombay in the year 1943. The formation of the Indian People’s Theatre Association (IPTA), and the first Congress of Communist Party - Rakhshanda counts the events that mark that year as significant. “It was the first time general secretary PC Joshi thought of yoking culture with politics,” she says. The IPTA began performing plays to propagate progressive thoughts and ideas to audiences beyond literature’s reach. “Whatever happened in Bombay affected every corner of the country,” Rakhshanda adds.

She also draws attention to the film’s industry contribution to the movement. Cinema brought to Bombay writers, lyricists and technicians from all over India. It was around that time that Saadat Hasan Manto became the voice of the movement, writing about characters hanging around the fringes, waiting for something big to happen. “And then, suddenly, Bombay became a metaphor for progressivism,” Rakhshanda says.

“In fact, it was a great period for All India Radio as well; many major writers of the era were associated with it,” Danish adds.

The writers of the time
Apart from Manto, the city was home to progressive writers like Kaifi Azmi, Majrooh Sultanpuri, Ismat Chughtai and Meera ji. But Manto and Ismat were also the biggest forces rebelling against the way of writing enforced by the progressive authorities. “They weren’t interested in writing in a particular way, because they believed that the integrity of a story shouldn’t be compromised to fit an ideology,” Danish says, adding, “Manto was abandoned from the movement, and later embraced by the same people.”

One aspect of Manto, Ismat and Meera’s writing that was unacceptable to the progressives was the mention of the dark underbelly of society, of things considered obscene. “In 1945, in Hyderabad, Urdu progressive writers made an attempt to ban obscenity from literature,” recounts Rakhshanda.

Decline of the movement
It was when the authorities started interfering in writers’ creative processes and imposing restrictions on their writing that the movement began to fizzle out. “Initially, there was freedom in their rebellion, but later the Bombay progressives started asking writers to write about things they weren’t even aware of,” Rakhshanda says. Stalinist ideas of formalism, rigidity and dictatorship started coming into the country by the mid-40s, “And they were also reasons for the decline of the progressive movement,” she adds.

Recently, in the year 2015, many authors returned the awards won by them in response to the growing intolerance in the country. However, Rakhshanda doesn’t believe it to have been an act of progressivism. “Award wapsi cannot be compared to the progressive movement in any way. It was too small and too localised; it was just a reaction,” she says.

In a nutshell
The definition and the methods of progressivism change with time. When philosopher Sir Syed Ahmad Khan translated the Ain-I-Akbari (a compilation of rules written by Akbar) and asked Mirza Ghalib to write the forward, Ghalib refused not because he found the contents of the book to be objectionable, but because he wanted to tell Sir Syed to look forward instead of looking back.

“Progressivism is about looking forward, so it changes with every age and era. People were progressive back then, but today they aren’t,” says Rakhshanda.

“Today, your progressiveness is decided based on how outrageous you are,” Danish adds, to which Rakhshanda responds by saying, “I think that’s provocative, not progressive.”

The conversation ended with Naseeruddin Shah reading out Kachche Dhaage, a short story by Ismat Chughtai set in the Bombay of the early 1950s. He followed it up with reciting the poetry of Faiz Ahmed Faiz.