With increasing cases of workplace harassment in the start-up space, influential women are creating an awareness around the subject. 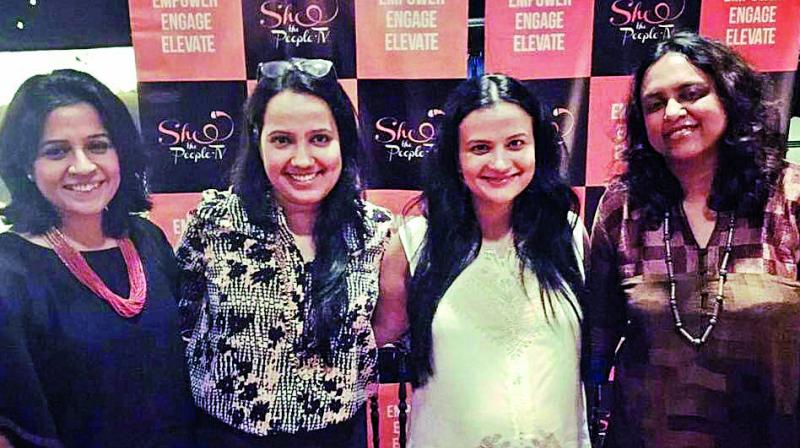 While start-ups may be the buzzword in India, the past couple of months have seen not one but multiple of these smaller companies land into trouble over how they treat women. From sexual harassment to causal sexism, the likes of The Viral Fever and Uber have come under fire for being an old boys club and not treating women in the company well.

A talk organised by SheThePeople saw the likes of Priyanka Agarwal, founder of First Mom’s Club; Ruchita Dar Shah, entrepreneur; and author Rashmi Bansal turn up to talk about some of the key points around sexism in start-ups. The talk was moderated by author Meghna Pant, and raised pertinent questions of not just how one must tackle problems in a start-up space, but what troubles do women leaders face in the sphere.

Ruchita explains that this problem of discrimination and bias starts not at the workplace, but at home. “I started my journey after my motherhood, and nobody understood what I was doing. They wouldn’t get the gist of what I was doing,” she explains. “It stems from home. A lot of women are not taken seriously at home. Women entrepreneurs give up midway because they do a lot more at home.”

And when it comes to trying to raise money as a female entrepreneur, both Ruchita and Priyanka — who is the CEO of Wishberry.in, a crowdfunding website — agree that it’s a harder world out there. “Crowdfunding is a new space,” says Priyanka. “We went to impact investors, one of the most well respected one. She loved the business and was also a big theatre buff. It would’ve been a no-brainer if I had a male co-founder. I asked her why and she said women have to get married. I told her I’ve been an entrepreneur, so I have made that choice. What’s the guarantee that if I was a guy, there would not been unforeseen circumstances?”

Adds Ruchita, rolling her eyes, “Everyone was interested in what my husband did. You need to quickly get a co-founder, and it needs to be a man.”

Quiz Shaili Chopra of SheThePeople on why it became necessary to address women in start-ups now, and she says, “I think it’s a dialogue we’ve had constantly. We’ve been doing detailed articles in the last three to four months, especially since the cases were emerging in India.”

Shaili goes on to add that it is important to talk about the start-up space in India because it’s an often misunderstood space that rarely affords space to the women there to even understand they’re being discriminated against. “Just because start-ups are edgy, innovating, young, no fixed time kind of spaces, that does not mean someone should cross the line because this is a place where anything flies. I don’t think anything flies here,” she explains. “Having an informal environment can aid energies and positive workflow. But that shouldn’t mean people misconstrue it as something else. I think those who have to harass women, or sexually exploit them, are doing so irrespective. It’s not just because they’re in start-ups. I have a feeling if they were in corporate set-ups, they’d have done it there too.”

With sexual harassment complains in the start-up set-up emerging boldly, author Rashmi believes it’s a murky place. “There’s a perception that women make false complaints,” she muses. “For anyone to come forward and talk about this, it’s difficult. If she’s saying so, it should be investigated.”

Recounting her own run-in with the predicament, Rashmi asserts that she found plenty of support when she spoke up about sexual harassment. “People have been supportive. A lot of women, who have experienced it, reached out but didn’t want to make it public. Women want to speak but not speak up, that’s the sad part.”

Awareness of rights is an important aspect of this problem, all the women panellists agree. “In advertising, we didn’t say too much. We just wanted to be part of the system. There were times when men misbehaved. I never thought I should complain to my female boss. We didn’t know; there were no awareness of rights.”

Says Shaili, “In this entire thing, you’ll see that organisations where this is happening have a large number of women. They are facing it, some keep quiet, but most of them don’t even recognise this is happening. There’s problem of knowledge, redressal and what next.”

“I think the solution with respect to law is well-documented. Everyone knows the law that needs to be in place. That said, start-ups are places that are not large organisation. Some of these laws may not be mandatory. There’s no end to making law the only benchmark. I think the most important thing to do is condition the place,” she concludes.