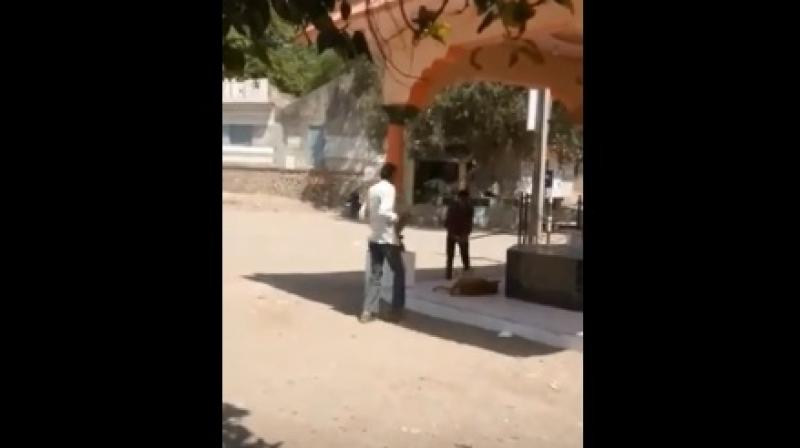 Section 34 of the IPC addresses criminal acts committed by several persons in furtherance of a common intention, and Section 429 prohibits mischievous killing or maiming of an animal, making the offender liable to be punished with a five-year jail term, with or without a fine.

Junagadh: Social media has been abuzz with people posting a gruesome video showing three men mercilessly beating a dog to death. Facebook feeds went into overdrive with concerned animal lovers trying to figure out where the video had been shot so that the perpetrators could be brought to justice.

The video shows a dog sleeping in a temple, when suddenly two men come out of nowhere and start thrashing it with bamboo sticks, a third abuser joins in and beats the dog till it lies lifeless on the temple premises. The third man is then seen dragging it by its legs and throwing him in the bushes nearby.

After receiving word that on 18 March, three men allegedly killed a stray dog who was sleeping in a temple in Junagadh by viciously beating him to death with bamboo sticks, People for the Ethical Treatment of Animals (PETA) India worked with the Junagadh police to file a First Information Report against the perpetrators under Sections 34 and 429 of the Indian Penal Code (IPC) and Section 11(1)(a) and (l) of The Prevention of Cruelty to Animals (PCA) Act, 1960.

Section 34 of the IPC addresses criminal acts committed by several persons in furtherance of a common intention, and Section 429 prohibits mischievous killing or maiming of an animal, making the offender liable to be punished with a five-year jail term, with or without a fine.

The police have identified the perpetrators, and it is expected that arrests will be made shortly.

"The pain and fear that this dog must have endured as he was beaten to death by three men wielding bamboo sticks is hard to imagine," says PETA India Emergency Response Coordinator Meet Ashar. "PETA India is calling for the perpetrators to be punished to the fullest extent of the law, including jail time, and for stricter penalties for acts of cruelty against animals, for everyone's sake."