Meghan, Kate emojis to be released before royal wedding

New MeghanMojis and KateMojis will feature Markle and Kate in range of outfits accompanied by sayings supposedly related to their lives. 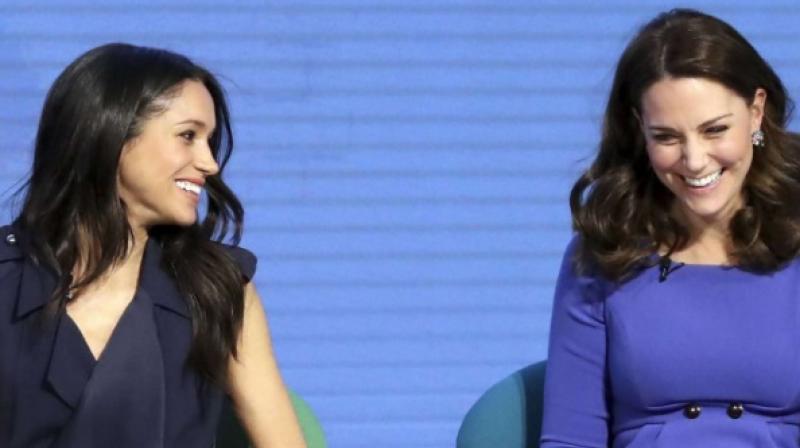 Currently, Markle’s only MeghanMoji prototype features her wearing a denim-shorts suit and holding a purple handbag - an outfit she once wore in New York. (Photo: AP)

A new range of royal-inspired emojis are all set to be released by third-party tech company DRKHORS.

The new MeghanMojis and KateMojis will feature Markle and Kate in a range of outfits accompanied by items and sayings supposedly related to their lives.

As visible from the prototypes visible on the company’s website, they will include such sayings like “Does my bum look good in this?” and “Cheeky Bugger.”

As for actions - if you ever wish to convey that you are drinking wine in a royal manner, the emoji version of the Duchess of Cambridge downing a glass of wine would be appropriate.

Expressing shock could be shown by the KateMoji of Kate drawn with her hands clasped over her mouth could be a good fit.

Currently, Markle’s only MeghanMoji prototype features her wearing a denim-shorts suit and holding a purple handbag - an outfit she once wore in New York.

However, the MeghanMoji, or “American Princess,” as DRKHORS depicts her, is expected to include Prince Harry - and fans can expect Kate’s emoji to be accompanied by Prince William, Prince George and Princess Charlotte.

However, the emojis won’t come free - the emoji apps will be sold separately for £1.41 Currently, there is no release date for the emojis, which aren’t Unicode-official, but the DRKHORS website states the emojis will be available May 2018 - just in time for the royal wedding between Meghan Markle and Prince Harry, which will take place on May 19 at St George’s Chapel.