Fisticuffs for a fair fight!

After the recent spate of molestations cases, women in Bengaluru are opting for self defence classes. 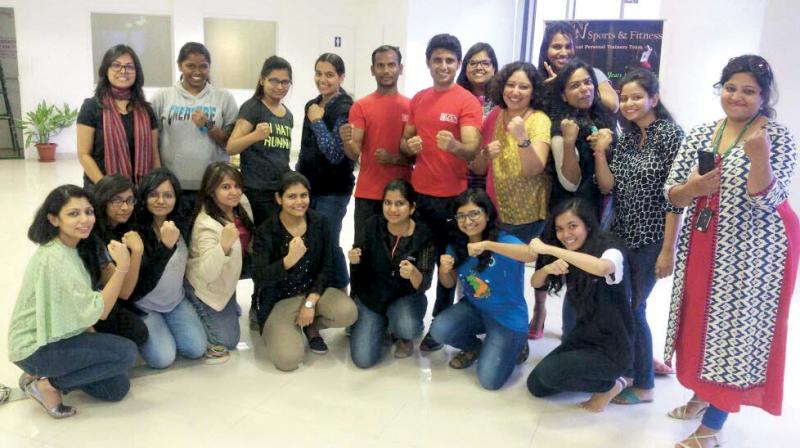 A file picture of girls at a martial arts class with trainer Prasad.

After the recent events which have taken place in the city, without a doubt, Bengaluru is not safe anymore for women. Everything from petitions to increased security and even protests have taken place, but nothing is as good as taking matters into our own hands. Attempting at doing just that, more and more women are registering themselves at self defence classes, so they can protect themselves in times of crisis, without having to depend on others.

Most gyms and self defence training centres admit that there has been a larger influx of women registering for classes post the New Year Eve incident. “It’s time women stopped running away from risky situations and stood up for themselves. Simple twists of the hand and kickboxing techniques can take them a long way to even give them enough time to get to somewhere safer,” opines Danny Fernandes, a women’s self defence coach. “Punches too are very effective if they know the weakest areas. But mostly self defence classes teach women about being aware of their surroundings. It’s all about dealing tactfully with attackers,” adds the instructor.

Apart from women taking matters into their hands, a number of corporate too are trying to encourage women to take up self defence. “Attack and defence are the two main techniques of self defence, which is what most corporate want their female employees to be aware about,” says Prasad MG who has been conducting workshops for different corporate in  the city. “After the MG Road incident, more women are coming forward to learn the techniques, but it’s still not enough. Women are still very held back when it comes to training and think it takes a lot of effort, but it’s not karate chops or kickboxing and takes minimum effort but is very important for every woman to be able to defend herself, especially in today’s day and age,” continues the trainer.