All doubts are laid to rest here

Santhome Cathedral, erected in memory of the doubting apostle of Jesus, St. Thomas, is a must visit in Chennai. 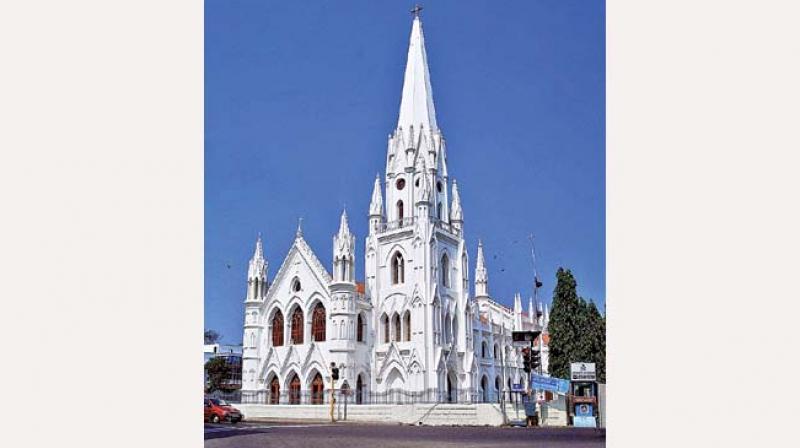 The Gothic Cathedral looms large and is open to people from all faiths and walks of life.

The best moments of a journey are always unplanned. Those are the moments that get calligraphed in travel memes. After almost a decade I was back in Chennai on work. I had a few hours to spare before my flight back home. While bumming around in the hotel room, the leaflet on the nightstand caught my eye. It was a tract on "sights to see" in the city. Santhome Cathedral or St.Thomas Cathedral was on the list. On a whim, I got into an auto and made my way to the Cathedral which stands on the shores of Marina beach.

The last time I visited the Cathedral, my hair was black and waist willow. The significance of the Cathedral was utterly lost on a 15-year-old who spent a chimerical summer reading Thorn Birds. This time around, when I found myself standing in front of the Cathedral, I was 15 twice over. The hair was now dyed and the hips wide.

Santhome Cathedral stands atop the tomb of St. Thomas. There are only three churches in the world that are built over the tomb of an apostle of Christ, the other two being St. Peter's Basilica in Rome and the tomb of St. James in Spain.

Amongst all the apostles, St. Thomas, also known as Doubting Thomas, is my favourite. He was intelligent enough to doubt and Trojan enough to express those doubts. The search for knowledge begins with a kernel of doubt. The latter Thomas had in abundance. Thomas was not present when Jesus appeared to his disciples after his resurrection. Thomas refused to believe that the Lord had risen; he would do so only after seeing the marks of the nails in Jesus's hands with his own eyes. During his next apparition, Jesus invited Thomas to check His wounds, which Thomas promptly did before falling to his knees and crying, "My Lord and My God."

Apostle Thomas came to India in A.D. 52. He was martyred in then Madras in A.D. 72. When the Portuguese arrived in Mylapore in 1521, the chapel which contained the tomb of St. Thomas was in ruins. The Portuguese rebuilt the church in 1523, which lasted until the end of the 19th century. The present-day Cathedral was built in 1853.

The Gothic Cathedral looms large and is almost pastoral in the middle of a raucous city. The wide teak doors are open to people from all faiths and walks of life. Inside the 115-foot-long nave, the harsh Chennai sun streams through 36 stained glass windows creating a psychedelic display of colours. Under the 155-foot-high steeple stands the statue of Christ with arms wide open. It tickles me to see that standing on a lotus with two peacocks for company, and the Lord was doing a 'when-in-Rome'.

The underground tomb-chapel, which is built above the place where St. Thomas is believed to have been buried, is behind the main Cathedral. This chapel contains a precious relic-a bone from the tip of St. Thomas's little finger. A caretaker-nun brings out the relic once every month for a special mass. Looking at the red and gold box that holds the relic I wonder what it must be like, for the nun to hold a piece of a man who walked alongside the Messiah himself. "I get goosebumps just thinking about it," says the nun rubbing her arms. "I cannot express the feeling in words, but it is something … something …" She gropes for words and fails. I think I get what she means, though my agnostic brain cannot shape that feeling into words. The nun has no doubts in her mind.

There's a pole inside the compound. Locals call it the Santhome pole. Some believe it was erected by St. Thomas. But nobody knows for sure. Legend has it that the sea never crosses the pole. Even during the Tsunami, the sea did not defy the pole, leaving the church intact and demolishing the rest in its wake. The place where Doubting Thomas rests is but a testimony to the aphorism: Be not faithless, but believing. Delicious irony!

A few hours later, mid-flight, a teeny-tiny doubt rears in me: Can faith flourish without the faithless?

The author is an artist, illustrator, photographer,  writer, columnist and a traveller with a keen interest in art and culture.