Meghan took a break from the Invictus Games events on Sunday morning though Harry watched a cycling competition. 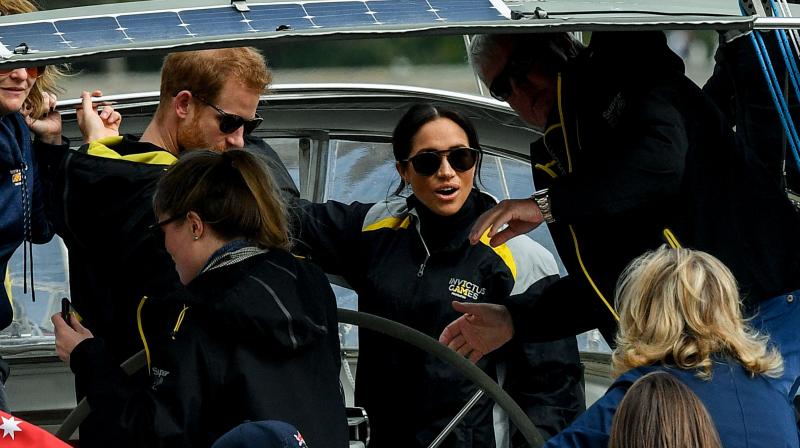 Britain's Prince Harry and his wife Meghan, Duchess of Sussex sail on Sydney Harbour on the first day of the Invictus Games in Sydney on October 21, 2018. (Photo: AFP)

SYDNEY - The pregnant wife of Britain’s Prince Harry, Meghan, the Duchess of Sussex, will cut back her busy schedule as the royal couple enter the last week-and-a-half of their tour to Australia, New Zealand and the South Pacific.

Meghan curtailed her activities after attending the opening ceremony for the Invictus Games on Saturday night at Sydney’s Opera House. A thunderstorm delayed the opening for more than an hour but did not dampen the spirits of competitors from 18 nations who watched a musician play a didgeridoo in a traditional Aboriginal welcoming ceremony.

“You are the role models to us all, and you are going to put on one hell of a show over the next week,” Prince Harry told the competitors in his address.

The Invictus Games are athletic competitions involving wounded military personnel and have been credited for fostering hope and resilience in people traumatized during conflict.

“Be inspired, get excited. Allow the example of service and determination that you all see to change something big or small in your own lives,” said Prince Harry to rousing applause from 500 athletes and a supportive crowd that filled the Opera House stairs, according to video of the speech on the British royal family’s Twitter account.

However, Meghan took a break from the Invictus Games events on Sunday morning though Harry watched a cycling competition.

“After a busy program, the Duke and Duchess have decided to cut back The Duchess’s schedule slightly for the next couple of days, ahead of the final week-and-a-half of the tour,” Kensington Palace said in a statement reported by Australia’s SBS news.

The Duchess was back on deck at lunch time, welcomed by Australia’s Prime Minister Scott Morrison at an Invictus Games reception for competitors and mental health organization representatives.

“You’ve all come together today to join together as a community to give testimony to that great Australian spirit about how we look after each other as mates,” Morrison said in his address which was televised on the Australian Broadcasting Corp.

During the reception, the Duke and Duchess met with children from the Kookaburra Kids Foundation which supports families affected by mental illness, the Endeavour Clontarf Academy which helps disadvantaged indigenous men, and cadets from the Royal Australian Air Force.

The royal couple will travel on Monday to Queensland’s Fraser Island on the north-east coast of Australia before leaving for Tonga and Fiji later in the week.

On Friday, they will return to Sydney for the final days of the Invictus Games before flying home via New Zealand.