With a mix of traditional painting and mixed media, the upcoming auction at AstraGuru will be all things contemporary. 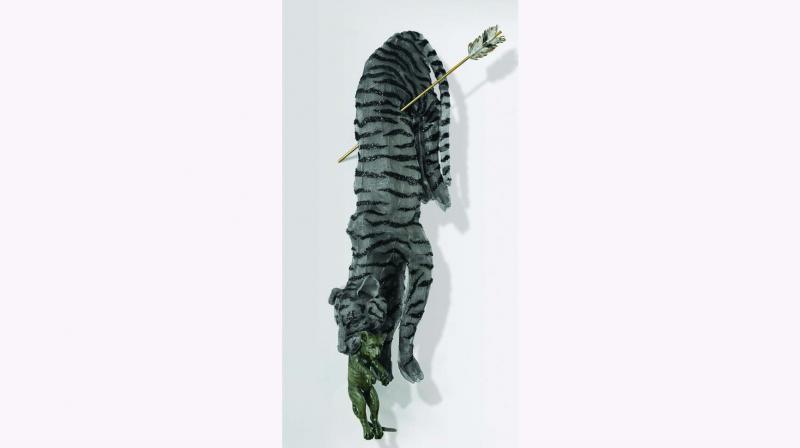 The upcoming auction at AstraGuru is a common platform for bigwig contemporary artists and upcoming ones, creating a mix of traditional painting, mixed media works, and sculpture. With names like Takashi Murakami and Yue Minjun being auctioned for the first time in India, along with familiar names like Atul Dodhiya and T.V. Santosh, this collection brings in the best of Southeast Asian contemporary art.

One look at the catalogue and it is apparent that this is not like a regular art auction. Barring a few pieces, most of the artworks are either mixed-media, like the Queen Victoria & Modi statue by Debanjan Roy — made of fibreglass and painted with acrylic paint — or sclupture, like Saravanan P’s Gathered, which depicts a human figure made of small ball bearings lying on the floor.

Explaining this trend, Vice President, Business Strategy and Operations, Siddhanth Shetty says, “Contemporary artists are always looking to push the boundaries of how art is being conveyed. So I always believe that art can never be confined in a certain medium, art is just an expression and medium is just a way in which they like to express. That’s why you see contemporary art is made in different forms. It’s not that they do not believe in that particular art medium, but they like to explore boundaries of different media that it combines.”

An example of pushing the boundaries can be seen in Raqib Shaw’s Death, Beauty, and Justice IV. The London based Indian artist, on a base of archival paper, creates art with industrial paint, acrylic, glitter, and rhinestones.

Another pattern that may be observed is that of the subjects picked by the artists, women in particular. Be it Bangladeshi artist Tayeba Begum Lipi’s untitled work, a piece made of stainless steel and razor blades that depicts the societal blindness towards women’s struggles, or Anju Dodiya’s Light My Fire, which is a mattress painted with acrylic paint, depicting an unintentional blend of fear and ambiguity. Talking about this, Siddhanth says: “Your policy and ideology is a big expression of art, and I believe that the artists in the contemporary sphere are big thinkers. Eventually, we want to have an impact on how society thinks, how society should steer in that direction so they tend to have those kinds of ideologies that come across. Because they want society to pay attention to certain ideologies, they want you to respect them in that manner. There’s always this young generation of artists who are going to put these messages out there because they want society to look into it.”

Bharti Kher’s Folie is one such interesting take — Using shades of green, white and violet, Bharti has created a larger than life artwork, depicting the beginning of life.

The auction also comprises art from upcoming artists such as Lakshman Rao Kotturu and Suryakant Lokhande, amongst others. Kotturu’s untitled artwork is a 3D sculpture of an injured tiger holding her cub by the scruff of its neck. Made with stainless steel mesh, rods, and fibreglass, the piece gives voice to a simple but impactful message. Lokhande’s art, on the other hand, is a new version of the Last Supper, depicting famous fictional villains like the Joker, Maleficent, Night King, and the Mad Queen, along with a self-portrait of the artist sitting at the centre. Siddhanth believes that it is the auction house’s responsibility to give such artists space and respect they deserve.

“They might be quite new to the market, but they are critically acclaimed as well. You always have to respect new artists in an auction, it’s not something that is in our control. Tomorrow if something we think is valued X and doesn’t reach that particular valuation, it has a detrimental effect on the new artist because it brings their value down. So we have to be extremely sensitive in how we portray them,” he says, adding that a lot of market research goes into selecting the artist and the artwork that will suit the market.

The most notable and expensive artwork in the lot comes from Japanese artist Takashi Murakami. The happy painting of smiling flowers is the definition of contemporary art, Siddhant opines. The piece is estimated to go for upwards of three crores.