While being able to detect fake news, ‘Logically’ will also allow users to follow a story as it unfolds. 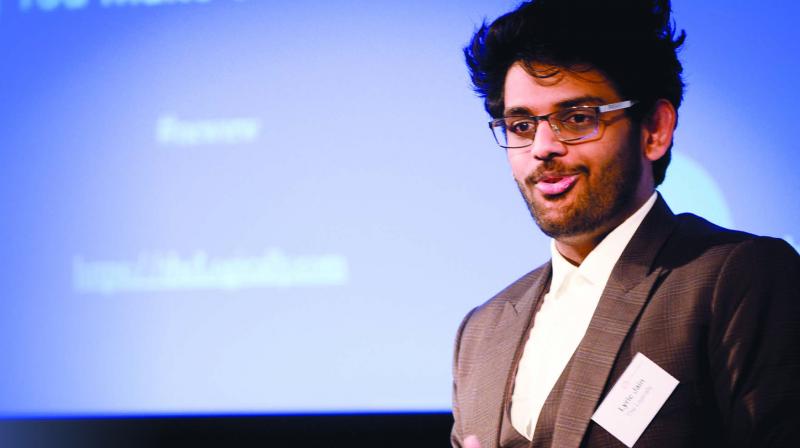 We as a country have witnessed the horrendous repercussions of fake news that is circulated day in day out through social media platforms like WhatsApp, Facebook, and electronic media to name a few — be it social uproar through malicious trolls or taking violent turns with increasing number of lynchings. At this critical juncture of advancement in technology and politics, Lyric Jain, the 22-year-old MIT graduate’s ‘Logically’, a platform that ensures users consume reliable news and combat fake news comes as a reliever.

It was after Lyric witnessed the breakdown in civic and political discourse during Brexit and the 2016 presidential election in the US, that he got to work towards tackling the spread of misinformation and the negative effects it has on people’s psyche and subsequently influencing the democratic process. “In July 2017, while studying at MIT, I conducted preliminary market research which demonstrated there was both a need and a market for a solution to this problem. My first course of action was designing a machine-learning algorithm, that ‘Logically’ now uses as part of an ensemble of Artificial Intelligence (AI) technologies, to detect logical fallacy, inaccuracies and bias,” shares Lyric.

Talking further about the technology used to create ‘Logically’ — the platform that allows users to detect fake news and track a story back to its original source, the Mysore born entrepreneur says, “The platform gathers the biggest news stories and highlights the features that make news fake — like headline-article dissonance, logical fallacy, political bias, and inaccurate statistics — all using an ensemble of machine learning algorithms. The AI incorporates three large ensemble models to determine the credibility of information shown to users. These are metadata — the quality of the source the information comes from, the content itself — if it contains inaccurate or misleading claims, and social network behaviour — how the story proliferates and spreads.” Illuminating the quality of information across articles, ‘Logically’ provides users with a transparent and insightful view that allows them to determine how true the news really is.

While being able to detect fake news, ‘Logically’ will also allow users to follow a story as it unfolds. “We highlight the most recent coverage of each story, and provide users with a visual representation of how the story evolved over time rather than simply providing a single article,” shares Lyric, who recognises the need for a solution to navigate potentially deceptive image and video technologies like deepfakes. “Our product roadmap includes expanding its capabilities to do the same with picture, video and audio,” he adds.

‘Logically’ will launch in UK in September this year and a month later in India. But there is a difference between the US, UK, and India when we talk about the spread of misinformation and its consequences. “In all three countries the highly emotive nature of fake news stories make people quick to react but it’s the platforms used to spread the fake news that highlight the major differences between them. The consequences of fake news in India have been fatal, particularly due to the way these stories spread across messaging applications like WhatsApp which has over 200 million users in India. Because the WhatsApp messaging system is encrypted, it makes it extremely difficult for law enforcement to intervene and stop fake stories spread.

Whereas in the UK and the US misinformation is more publicly accessible via platforms such as Facebook; with opportunistic actors looking to win eyeballs and ad revenue by leveraging shocking content and confirmation bias. This is what’s fuelling growing political polarisatio.”

But how will ‘Logically’ as a fake news combating platform work in these different scenarios? “Logically will use AI to enable people to accurately assess the validity of information faster than any human can. By using our platform, people will be able to qualify information in the same moment they interact with it, meaning they are less likely to be compelled to act on misinformation or fake news. Whilst the platform can be deployed in any country or region, the technology will be carefully calibrated across all roll-outs so it’s adapted to particular cultural or linguistic nuances,” shares Lyric, who always had a keen business acumen. He started his first business venture at the age of 16 when he designed and developed the ABS secure lock which has now become an industry standard. “I was studying for my A-Levels when a friend of mine got home to find the lock on his front door snapped. It was astounding to think that burglars could enter with little more than a wrench and a bit of force. As standard Euro Cy
linder Locks offered limited resistance to lock snapping, it was evident that a new system was needed to prevent it and secure peoples homes,” shares Lyric. His move into machine-learning was facilitated by a term at MIT, where he delved into Computer Science — inspiring the ‘Logically’ but we will have to wait and see if this will help combat the growing menace of lynching and violence  that India has been witnessing due to the spread of false news.