Yoga and music complement each other as eminent artistes across the nation join hands on the venture of creating an anthem for the practice. 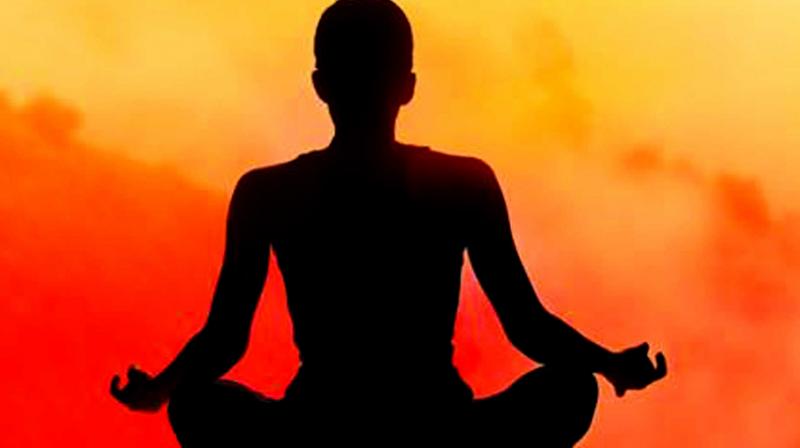 The trumpet sounds as appropriate as the sweet flute.

Centuries old Yoga is practiced worldwide, but sadly it is understood only in its physical form in the West. Its spiritual link, and the wider concept it encapsulates has largely been forgotten in its current avataar as the best way to keep fit. Bangalore based Centre for Soft Power commissioned Sangeet Natak Akademi awardee Dr Mysore Manjunath to create a musical anthem for Yoga; this unique 5 minute audio video collaboration of over 20 top artists is being released on 21st June, World Yoga and Music Day. The appropriate lyrics have been written by Sanskrit scholar and author Dr Shatavadhani R Ganesh, which speak of the origins of Yoga as well as its uses - Born in the land of Bharat, Yoga is the bestower of all auspiciousness, and removes impurities caused by the body mind and speech.

In the words of Aparna Sridhar, Editor at the Centre of Soft Power and Coordinator of the project, “We have identified 11 verticals across which India’s influence in a world context is unmistakable. Yoga is one of them, yet the spiritual component of Yoga is lost, as is its link with India. This anthem inextricably binds the origins of Yoga to its link with Sanskrit. On 21st June, this Yoga anthem will be released at various events – at the British Parliament by Padma Shri Dr H R Nagendra, at functions in various State capitals, several schools all over India are also going to play this anthem on the 21st. Last weekend we had the scions of the 4 main patrons of our traditions in the South come together at an event in this connection – Mysore, Vijaynagaram, Sandur and Thanjavur.”

Speaking to Mysore Manjunath, whose name is synonymous with the violin, “I did not want to use music which had existed before. But “finding” a new raga is a Herculean task. It is not just stringing together notes in a combination that hasn’t been done before, there must be melodic content”. Indeed, one of the first descriptions of a Raga in our Scriptures is, it should be “ranjayate” (appealing). Continuing his explanation, the violin virtuoso said “I was blessed to find this new Raga which we named Bharat, in honour of the first Emperor of India. I feel its note structure is interesting, and has the required “bhaava” necessary for this composition. The next challenge was to involve the participation of other great artists to put it together. Everyone was in a different place, all over the world”.

The artists who have collaborated in this venture include Carnatic vocalist Bombay Jayashri, dhrupad vocalist duo Gundecha Brothers Umakant and Ramakant, Ronu Majumdar on the flute, Jayanthi Kumaresh on the saraswati veena, Sanjeev Abhyankar senior disciple of Pt Jasraj, and sitariya Rafique Khan.

Percussionists include, on ghatam Giridhar Udupa, on the tabla Ramdas Palsule, mridangam exponent BC Manjunath and on the khanjira, N Amrith. Western musicians include Alice Barron from London on the violin, Ned McGovan from Holland on the flute, Falvia Sigurta from Italy on the trumpet, Arun Ramamurthy from USA on the violin, and on the piano, Keiko Shichijo from Japan.

But the soundtrack, despite the contributions of artists of different genres is seamless, choate and uniquely Indian inspite of the Western instruments. Manjunath explained how this was – he recorded the music and sent it all the musicians. Incidentally, this project was without any renumeration, purely out of love for the lofty ideal.

The artists then sent back their rendering, via “We transfer” which was then edited and put together by the extremely talented “magician”, Praveen D Rao. Admitting it was an extremely difficult task, Manjunath said “we chose a common pitch and a common tempo, which all the musicians followed.”

“I didn’t want something too fast; it needed to be conducive to the practice of Yoga. I gave full liberty to each artist to creatively interpret the music I had sent, to include “alaapam”, not just sing the lyrics with embellishments. In the studio it took us 4-5 days for both of us to edit and finally put together the track,” he further added.

The track opens with the auspicious sound of the conch, and the recitation of Aum, the deep “Aum” in the “mandra saptak” of the gravelly voiced Gundechas merging with the higher pitched Aum of Bombay Jayashri’s unmistakeable voice. The shape of the Raga emerges with the lyrics “Jayati Yoga Vidya”, with the skillful, unobtrusive interpolations of the different instruments.

The trumpet sounds as appropriate as the sweet flute. The bass of the saraswati veena is matched by the boom of the mridangam. The music has been given a visual form through dance by the Raadha Kalpa Dance Company.

Pt Sanjeev Abhyankar verbalized “Yoga is a gift to the world by India through Patanjali muni. I am happy to be a part of the Yoga anthem, and Manjunath ji’s tune is very refreshing and catchy.” Pt Ronu Mazumdar shared that he found Raga Bharat somewhat similar to Raga Deepavali, so he found it very easy to innovate musically in it, and he hoped this anthem would soon indeed become the face of Yoga worldwide.