Vishnudas circumnavigated the earth on foot and shares his experiences with us. 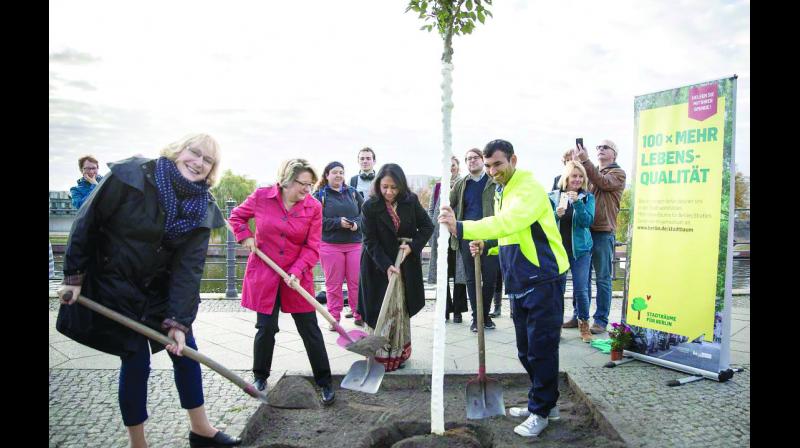 Tree planting with Svenja Schulze, the federal environment minister of Germany, and Indian ambassador to Germany.

Imagine being able to leave everything, pack your bags and head out to see the whole world. Sounds like a dream doesn’t it? Well, for Vishnudas Shesharao Chapke who hails from Katneshwar, this scenario was a reality. This youngster packed his bags to circumnavigate the earth on foot. Known now as ‘Vishnu Da Gama’, he shares his experiences of travelling around the world.

It has been said that inspiration comes from the most unlikely sources. Vishnudas starts off, “While working in Mumbai, there was a French teen girl under my supervision. She had travelled to most Indian cities. She had visited states like UP and Bihar which I considered to be dangerous.Listening to her talk about her experience was what activated the globetrotter in me.”

In 2010 when he was asked to interview Captain Dilip Donde who was the first Indian to circumnavigate the earth by sea, the spark was lit. Surprisingly, Vishnu shares that he did not do any kind of preparations before heading out. He says, “This was not a planned trip. The plan was to go for a small vacation of two to three months. The route was from Mumbai to Myanmar and Thailand and back to Mumbai to resume work.” The budget was the reason behind Vishnu wanting to travel by foot. He shares, “I had a very small budget. I took lifts and stayed with friends so I could save up the cash. I met a lot of people and nature. I was exposed to a lot of cultural and environmental aspects.”

Vishnu shares that he was very curious to know about the people giving him lifts and vice versa. These conversations he had taught him a lot about the cultural, social and political aspects of the place he was visiting. Going on this adventure, Vishnu says was a big gamble in terms of his work. “I had to quit my job and then start my journey. I got a lot of help and support from my friends. They organised a crowd funding for my trip. On the road, people helped with food, water and shelter.” Vishnu reminisces about a particular family who opened up their home to him for over three months while he waited for his passport and visa.

When asked how many countries he visited, he says that this question doesn’t apply when one circumnavigates the earth. “Big countries like Russia have several places to visit which was not possible. I visited 35 countries in five continents. I started and ended at Platform 8 in Thane Railway Station,” he shares adding that he visited Asia, Australia, South and North America and Europe.

Vishnu says that while circumnavigating, direction is important. In his case, he travelled from West to East. Touristy stuff is what we tend to do when on vacation. But for Vishnu it was different. He shares, “I wanted to visit the Opera House in Sydney and Eiffel Tower in Pairs. But the ticket was too much so I saw places where the entry fee was less than two dollars. I focused more on the country side as the culture of the place was real there.”

The highlight of his trip he says was planting a tree in every country other than Myanmar and Thailand. “In some countries, I planted trees with their environment minister. Like Bolivia, Peru, Ecuador and Germany. I wanted to gift these plants to places I went. This is a memory that will be with them forever.” Hurdles in the form of visa, documents, budget etc were part of the package in his adventure. He almost considered quitting the entire journey when he got a tooth problem after eating Chinese food.  He shares, “Youngsters need to settle down first before going on a journey like this. You can start off with small trips and then increase the level.”

On his future plans he shares, “I plan to visit 25 schools in Parbhani in Maharashtra, interact with the students there and plant about 200 trees.” Vishnu shares that if he is able to save up enough, he would like to travel to Antarctica and Africa.