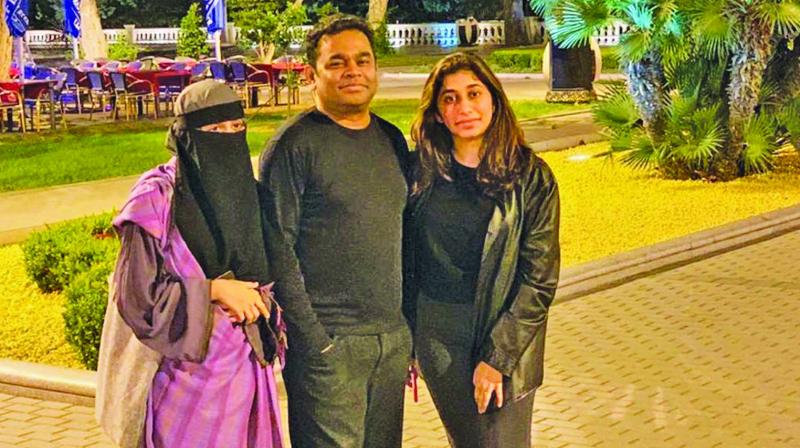 Around this time last year, Khatija Rahman, daughter of AR Rahman, was dragged into a controversy when she attended the 10th anniversary celebrations of Slumdog Millionaire. Her debut speech on the occasion was eloquent and appreciated by all. But her attire — a sari with a niqab (headdress) — was trolled. Many comments were based on the assumption that she was being forced to wear a burqa.

AR Rahman came in for flak in this regard. But Khatija responded responsibly on FB, asking people not to make judgements without understanding the exact situation. The Mozart of Madras also slammed the trolls.

The issue was resurrected recently when writer/activist Taslima Nasreen tweeted that she loved Rahman’s music, but felt suffocated watching his daughter in a burqa. She added that it was depressing to know that educated women in cultural families get brainwashed easily.

Khatija, in a reply on Instagram, said “I’m sorry you feel suffocated by my attire. Please get some fresh air, ‘cause I don’t feel suffocated; rather I’m proud and empowered for what I stand for. I suggest you Google up what true feminism means because it isn’t bashing other women down nor bringing their fathers into the issue. I also don’t recall sending my photos to you for your perusal.”

She posted a picture taken last year while the family was vacationing in Baku, where she isseen posing with her dad and sister Raheema. The post included hash tags like ‘living my life’ ‘being away from negative people’, ‘boss life’ and ‘boss lady’.

While Khatija’s sister Raheema Rahman supported her by posting the same picture, saying ‘I am not wearing a veil’, many celebs like Chinmayi, Aishwarya Lekshmi etc.backed her too. The latest to come out in support of Khatijais her little brother AR Ameen, who posted a picture ofthe music composer’s three children happily posing in their own styles of dress.