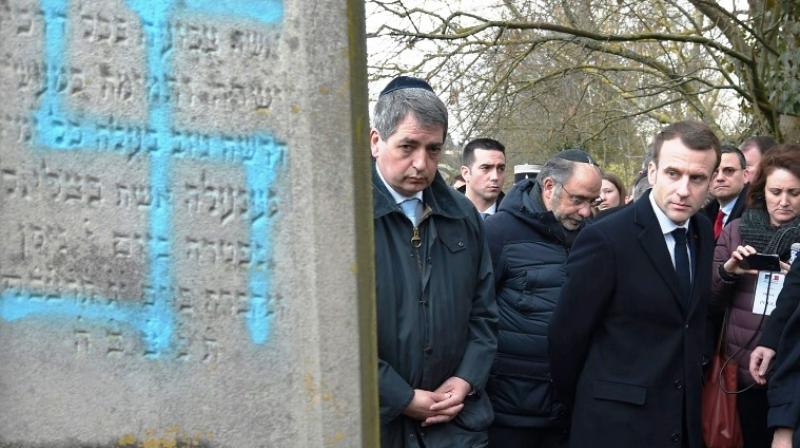 Macron's visit to the Jewish cemetery in the Alsace region, near Germany, where 96 Jewish tombstones were daubed with swastikas. (Photo: AFP)

The scourge has grown in recent years "and the situation has got worse in recent weeks," Macron told the annual dinner of the Representative Council of French Jewish Institutions (CRIF). "Our country, and for that matter all of Europe and most Western democracies, seems to be facing a resurgence of anti-Semitism unseen since World War II," he added.

Europe's biggest Jewish community is reeling after a string of attacks that have made global headlines. Macron announced measures including legislation to fight hate speech on the internet, to be introduced by May.

He said he had asked his interior minister to take steps to ban racist or anti-Semitic groups, singling out "for a start" three far-right groups – Bastion Social, Blood and Honour Hexagone and Combat 18, which he said "fuel hatred, promote discrimination or call for violence". He also vowed that France would recognise anti-Zionism as a form of anti-Semitism.

Macron earlier baulked at a call by a lawmaker in his Republic on the Move party to criminalise anti-Zionist statements, which criticise the movement that established Israel as a home for Jews. On a visit Tuesday to a cemetery in the Alsace region, near Germany, where 96 Jewish tombstones were daubed with swastikas, Macron promised: "We shall act, we shall pass laws, we shall punish."

Tuesday, thousands of people, some carrying banners proclaiming "That's enough", held a rally in Paris to denounce anti-Semitism, one of around 70 protests staged nationwide. Macron and his government have linked the appearance of swastikas and other anti-Semitic graffiti on artworks, shopfronts and headstones to far-right and far-left elements within the "yellow vest" protest movement.

Several officials have accused radical "yellow vest" of fomenting a climate of hatred. The anti-government protests began three months ago over fuel taxes but quickly grew into a broader anti-establishment, anti-capitalist rebellion, with some demonstrators using anti-Semitic slurs to denigrate Macron, a former Rothschild investment banker.

The number of anti-Jewish crimes rose 74 per cent last year. Anti-Semitism has a long history in France, where society was deeply split at the end of the 19th century by the Alfred Dreyfus affair over a Jewish army captain wrongly convicted of treason.

During World War II, the French Vichy government collaborated with Germany notably in the deportation of Jews to death camps. Traditionally associated with the far right, anti-Semitism has become ingrained in the high-rise French housing estates that house many members of France's Muslim community, Europe's largest. Jews have been targeted in several attacks by French jihadists in recent years.

But the proliferation of anti-Semitic graffiti is seen as a new trend. In recent days, the word "Juden" was spray-painted on the window of a Paris bagel bakery and swastikas were daubed on postbox portraits of late French Holocaust survivor and women's rights icon Simone Veil.