Meet team Operation Black Dot, who have been creating the technology behind empowering Mumbai’s voters this BMC election season. 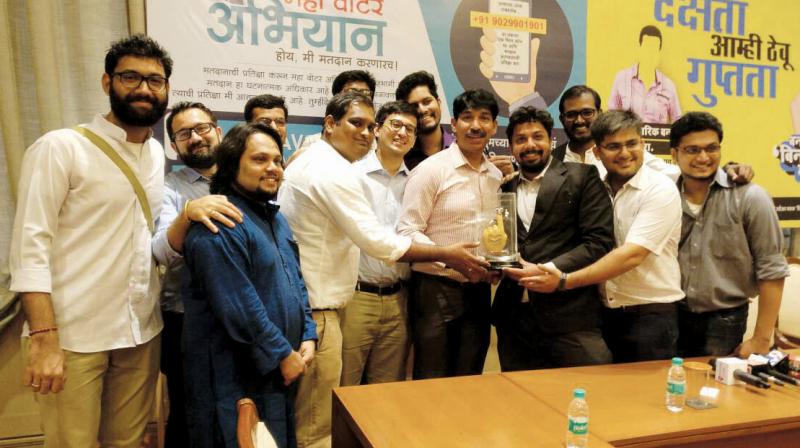 Even as Mumbai city goes in to vote in the BMC elections today, a bunch of city youngsters are sitting huddled up, analysing data about the polls, and the candidates. Over the last two months, the team behind Operation Black Dot (OBD) has worked tirelessly to ensure voters around the city were provided with ample information on whether their names were on the electoral lists and who the candidates in wards across Mumbai are.

The venture has been around since 2014, but it was only in December last year, that OBD team took up the mission in a big way and tied up with state election commission (SEC) to disseminate this information to voters. “The main focus for this integrated campaign was to see why voter percentages were low and there was a need to address issues like why voting in local body elections is important,” says Swaraj Shetty, chief innovation officer of OBD. “The other issue we needed to address was how to vote; a lot of people are unaware about their wards and candidates.”

Abhishek Gharat, chief technology officer at OBD and co-founder of Kraftpixel concurs about the team having a single focus. “Last time, the turn out in the elections was barely 45 per cent. For a municipal corporation that has a budget of Rs 20,000 crore each year, this is an important movement.”

To that effect, OBD first put up voter data on the website, deciding to scale up their efforts by harnessing Facebook’s chatbot technology. Essentially, simply by opening a chat window on Facebook, a chat robot will give you information about the candidates from your ward, where the polling booth in your area is situated, and more.

The tool is built for a lot more, explains Abhishek. “The candidate analysis tool is live today. You can compare the education qualifications, the (court) cases pending as well as assets of the aspirants in your area. Once the elections are over, there will also be a ward-by-ward analysis on the bot,” he elucidates.

However, with the new technology, there have been multiple media heavyweights like AIB and Phantom films that came on board to help increase voter awareness for OBD. “We got lucky that way,” smiles Swaraj. “Gupshup made this bot for free, Facebook is running notifications, and Twitter is helping us spread information too.”

The information on the bot comes straight from the election commission itself, and Swaraj says it is so to avoid spreading incorrect data. “The candidate information comes via affidavits filed by the aspirants themselves. We stick to the data given to us by the commission since it’s a sensitive talking point. We also don’t want to risk giving out wrong information.”

Despite the constant working since the past two months, Swaraj says he won’t be too disappointed if the voter turn out is not as large as they’ve expected. “We’ve had almost four lakh visitors on our website, we’ve reached out to over five lakh via Facebook and 12,000 people on the chatbot. But I wouldn’t be disappointed if the turn out is not too high; it’s a process more than a project. Other election commissions can take note too!”

Adds Abhishek, “Look, we’ll help wherever we get an opportunity to. It’s possible to work hand-in-hand with the government, and this has been achieved through equal public and government participation. We already have the technology and I hope we get a chance to assist other election commissions as well. I hope the they’re watching and taking note!”