An ode to culture

In the 21st century, a discourse on Indian culture is relevant only if it is inclusive. 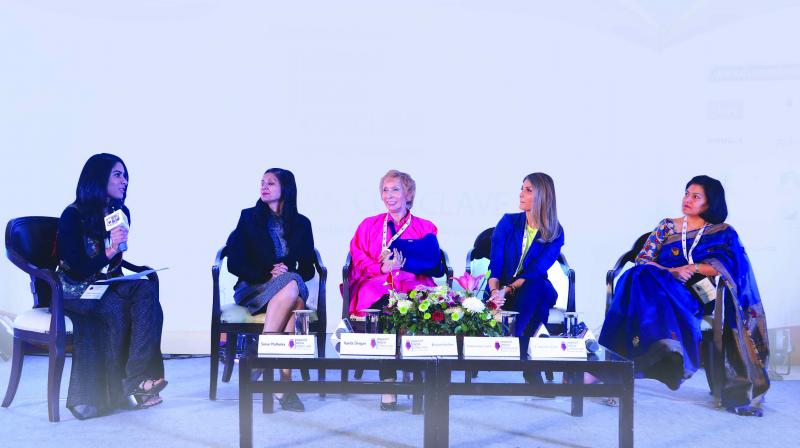 A panel discussion on ‘Going back to our roots’ and ‘Improving the world health system’.

A celebration of all things India — The Inkpot India Conclave — was a national event that brought together some of the industry’s strongest voices to speak about Indian culture, art, and heritage. While the discourse of Indian culture and its various facets is often addressed by panels across several events, the Inkpot conclave tied the conversation into the context of the 21st century: how does the Indian millennial navigate a culture that goes back centuries?

In India, design is as old as the human language. On a panel that explored what design, art, and dance lend to our cultural identities as Indians, Sunita Kohli, Shovana Narayan,
and Ritu Kumar, among other speakers, shed light on the place design holds in the modern Indian world. In the backdrop of a society that exists in a hangover of the previous century’s fashion, Ritu Kumar places her confidence in the millennial culture. “The Indian culture has set up norms for almost every discipline in the modern world,” she stated. “The millennials draw from this culture, refine it and take it forward,” she continued.

‘Branding India globally’ — While this may sounds like a conversation that finds itself tossed around among CEOs of top conglomerates more often than not, the conclave invited the revered handicrafts curator Jaya Jaitly to lend her words to it. Packaging Indian crafts as a brand needs to come from systematic policy even in the face of languishing art forms. “The government needs to lend an impetus to the artisans who are keeping ancient crafts alive,” said the former politician, who also established the capital’s beloved Dilli Haat. “They need two things: revenue and more importantly, respect. We need to respect and understand it before monetising on it,” she continued.

In the 21st century, a discourse on Indian culture is relevant only if it is inclusive. On a panel evaluating the evolution of ideologies, Shazia Ilmi, Sharif D. Rangnekar, and Raga Olga D’Silva opened conversation about Section 377 and Article 14.

A year in the making, the country is now free of the archaic Section 377. Does India reflect the change? “The only change I see,” remarked Sharif Rangnekar, “is that we can now talk about it openly on a panel. But the society at large still has a long way to go in terms of accepting the LGBT community.” Being an openly gay mother of two, Raga’s journey is a testimony of the same. “To this day, when I come out as a lesbian who is in a same-sex relationship and raising two children, I receive repulsive reactions,” she said. An evolution in changing ideologies calls for the millennials of this generation to rise above the bigotry that has set the pace for the society for many years, as Shazia Ilmi emphasised.

The discourse led into ideas of content consumption in the digital era and going back to our roots — and the diverse experiences of the panelists brought out stories that flavoured each of these discussions. In intervals of traditional as well as fusion-inspired performances, the conclave marked a day of cultural celebration and enlightening.