US Navy crew grounded after pilot draws penis in the sky

It was pretty funny to see that. You don't expect to see something like that. 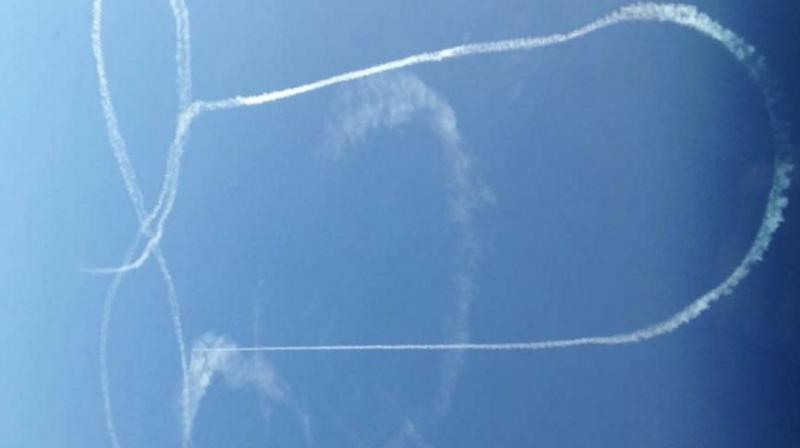 The pilot painted an enormous outline of a penis in the sky using the condensation trails from his multi-million-dollar warplane. (Photo: Twitter/DaffyDano)

The US Navy was left red-faced Friday after a pilot painted an enormous outline of a penis in the sky using the condensation trails from his multi-million-dollar warplane.

Residents of the town of Okanogan, in the western state of Washington, had been stunned to see the EA-18G Growler jet - a variant of the workhorse F/A-18 warplane - scrawling the phallic symbol on Thursday, and several photos quickly circulated online.

It’s a nice fall day in Washington at a kids ball game...then about 40 seconds in, things take a turn https://t.co/q98iAujkoY

Navy officials acknowledged one of their crews was behind the stunt, saying the aircraft "left a condensed air trail resembling an obscene image to observers on the ground."

"The actions of this aircrew were wholly unacceptable and antithetical to Navy core values," Lieutenant Commander Leslie Hubbell, a spokeswoman for the Naval Air Station on Whidbey Island, said in a statement.

"We have grounded the aircrew and are conducting a thorough investigation -- and we will hold those responsible accountable for their actions.

"The Navy apologizes for this irresponsible and immature act," she added.

Many onlookers on the ground posted images of the drawing on social media and appeared amused by the stunt.

Ramon Duran told The Spokesman-Review that he was running errands when he noticed the jet drawing the male genitalia.

"After it made the circles at the bottom, I knew what it was and started laughing," Duran said.

"It was pretty funny to see that. You don't expect to see something like that."

The Boeing EA-18G Growler combines the F/A-18F Super Hornet platform "with a sophisticated electronic warfare suite" at a cost of $67 million each, according to a Navy fact sheet.