A tour around Dharavi shows Mumbaikars and tourists a side that is often overlooked— the cottage industries. 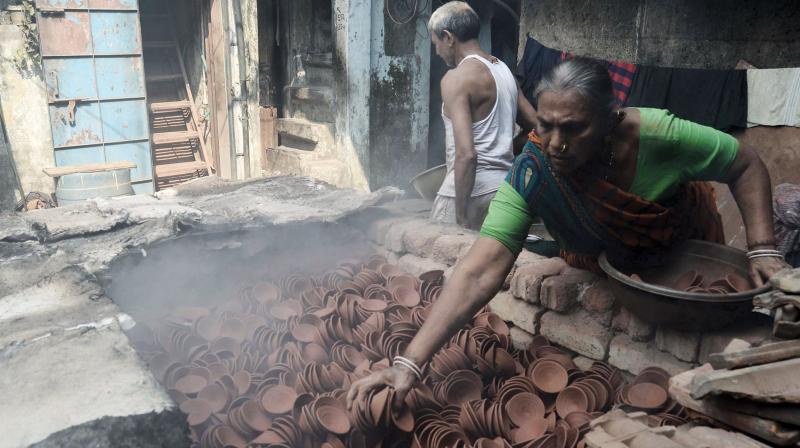 The incentive of these tours is to attract more Indian tourists, because plenty of foreigners know about Dharavi and come to study the area. (Photo: Shripad Naik)

Though made famous by the Oscar-winning film Slumdog Millionare, Dharavi has been home to one of the biggest slums in the world for over a century. However, aside from being a microcosm of poverty and cramped dwelling places, the slum is also home to a diverse variety of cottage industries. It is this side of the slum that Dharavi-dweller Dinesh Bhura from Some Place Else shows Mumbaikers and foreign tourists on his tours around the slum.

“Growing up in Dharavi, I saw foreigners taking tours around the slum. This was even before Slumdog made the place a landmark. I always wanted to conduct the tours myself. So when I got my bachelor’s degree in Communication, I started doing these tours part time,” says Dinesh, who works in a mall, adding that his father moved to the slum from Rajasthan. “A lot of people move here from different parts of the country to look for jobs. Even if they don’t have degrees, they can usually find some form of work right here in the industries of Dharavi.”

The industries, according to the guide, consist of a recycling section, a pottery-making section by the Kachchi Kumbharwada community, the garment-making section, and the leather industry. “The tour begins in Mahim station and from there you cross the foot-over bridge and are suddenly in the midst of the slum. From there, we first check out the recycling area, where plastic bags, bottles and other items are broken down into smaller pieces and washed. Then we move on to the residential areas, where some of the families have set up their garment sewing workshops or their kilns for pottery-making,” Dinesh elaborates, adding that it is a misconception to believe that Dharavi is all about poverty. “Many people have washing machines, TVs and other gadgets at home,” he says.

While the tour is quite an extensive one, Dinesh also adds that there are a few codes of conduct that one has to follow while touring the area. “We usually discourage photography while going around the area. While some people are friendly and actually like their pictures taken, others would rather not be clicked. If someone wants to click a photo, it’s better if they ask me first,” he cautions.

Despite the cautionary measures, however, Dinesh’s tours are definitely popular, with Mumbaikars and foreigners alike. “He can give an insight to the area that others can’t since he is from  Dharavi himself,” says Ritika Saraf, founder of Someplace Else. “The incentive of these tours is to attract more Indian tourists, because plenty of foreigners know about Dharavi and come to study the area. With these tours, we want to show the average Mumbaikar that there is a whole other side to Dharavi that is worth exploring,” she signs off.