Man hands himself in after challenging police to get 1k shares

Michale Zaydel handed himself in at a police station in Detroit, along with a dozen doughnuts and a bagel for good measure. 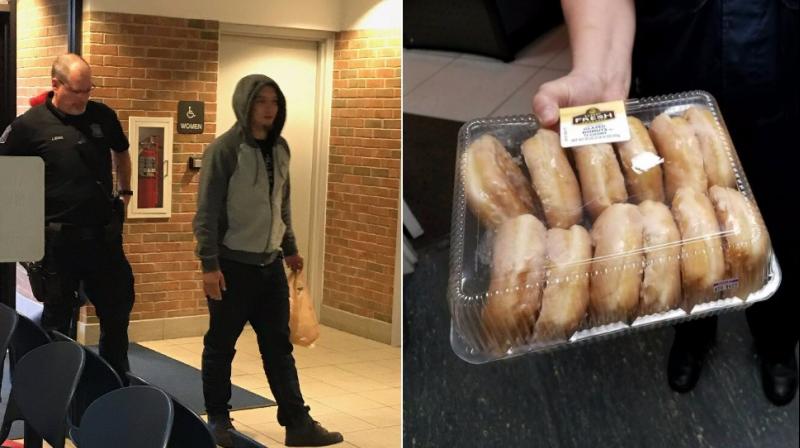 Michale Zaydel turning himself in along with a boz of doughnuts. (Photo: Facebook/ Redford Township Police Department)

Earlier this month, a wanted Detroit area man who calls himself “Champagne Torino” on Facebook had promised to turn himself in for 1000 Facebook shares.

Michale Zaydel, 21, messaged police who put out an appeal to find him, saying he would hand himself in if they managed to get 1,000 shares on their next post. The cocky felon even promised to throw in some doughnuts as a good measure. Redford Township Police Department in Detroit easily passed the milestone after posting his message, which was shared over 4,000 times.

As it turns out, he’s a man of his word – as he surrendered at a police station in Detroit, along with a dozen doughnuts and a bagel for good measure, But not before taunting police on Facebook, writing ‘You guys suck!’ He was sentenced to 39 days in jail on Tuesday, a day after walking into the Redford Township police department

Redford Township police department posted on their Facebook page, “This evening at approximately 6:30 pm Michael Zaydel made good on his promise to turn himself in to RTPD for his outstanding warrants. He walked in on his own, and not only did he bring the donuts, he brought one bagel! We would again like to express our gratitude for the support of all who followed this, shared it, and left us positive feedback. Mr. Zaydel was lodged and will have a hearing tomorrow morning at the 17th District Court.”

Zaydel who was originally arrested for misdemeanours, told TV station WXYZ that ‘cops like doughnyts’ and he wanted to reward them for any inconvenience.